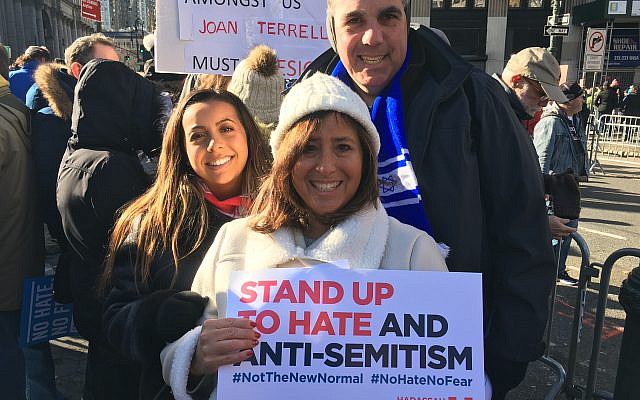 Over the course of the last week, we have seen remarkable movements in support of Israel and in support of the Palestinians/Hamas. What is remarkable is the difference in tone of these movements. I don’t quite understand why they take such different tactics but they do. From my personal observations, it seems that those in support of Israel come from a peaceful place gathering supporters to speak up to stand for Israel’s right to self defense. For those in support of the Palestinians, but more specifically in support of Hamas, a terrorist organization, the people come with an intent to prove their power and anger and frequently to physically strike out at the counter demonstrators.

Another detail I’ve noticed is that the Israel supporters come out to gather in a rally of support. While the Palestinian supporters come out to protest.  I’ve been there myself. In January of 2020, I participated in a rally against hate being held in NYC to support the Jewish community in Brooklyn and beyond who were being targeted by hate crimes. Orthodox Jews were being attacked in the streets of New York and New Jersey. Terrorists murdered Jews in a kosher market in Jersey City. Jews were being killed in places of worship in Monsey, NY. Lockdowns were common in Jewish Schools and Community Centers. The Jewish Community Relations Council of NY, brought together the Jewish community and their supporters to gather in downtown NYC to march together in a rally toward Brooklyn to speak out against hate.

As a participant, I felt a great joy in coming together with Jews and supporters, gathering peacefully to speak out against hate. I brought my daughter and husband and we marched with Hadassah, The Women’s Zionist Organization of America. Hadassah’s CEO, Dr. Janice Weinman, spoke at the rally, sharing that Hadassah was a primary sponsor of the “Never Again Education Act” which supported funding for the teaching of Holocaust education in public schools around the country. This act was signed into law in May of 2020. It is essential to educate the young of our nation in how hate manifests itself and becomes a wave of destruction. We need to strive to teach our children what Martin Luther King Jr. believed, “Hate cannot drive out hate; only love can do that.” I feel that we must strive to follow in those positive non-violent footsteps. How can we be over 50 years since Martin Luther King Jr.’s inspiration and continue to be in such a place of hate.

What I’ve viewed in the media regarding protests for the Palestinian cause, are violent, aggressive demonstrations. The participants come with the intent to engage with those on the other side in angry confrontations. They reach out to grab Israeli flags from the hands of supporters, they push, shove, kick in order to prove their strength. These protests come from a place of hate against not only Israel, but all Zionists, and Jews. They bear slogans saying “Hitler didn’t finish the job”. They are looking to create optics of their strength in beating up the other side.

As I struggle to make sense of this dichotomy in strategy, it seems clear to me that the angry, violent protesters in support of the Palestinians are not just anti-Israel, they are antisemitic. They are displaying their hate for all Jews not just Israel. They believe that Israel should not exist as a sovereign Jewish state, but that the Jews should be expelled from Israel to create one Palestine. I emphasize that the Palestine Hamas wants is “Judenrein” – free of Jews. Israel, in its charter and Declaration of Independence declared itself a state of the Jews, welcoming all people to live in peace. David Ben Gurion reached out his hand in peace to the Arabs living in Palestine upon declaring the establishment of the Jewish State of Israel. The intent of the State was to live together in peace. Hamas’s charter states clearly that their goal is to destroy and eliminate the Zionist entity and replace it with a Muslim, Arab state.

Many anti-Israel supporters make false claims about Israel. They claim that Israel has a policy of ethnic cleansing. If that was the case, why are there 5 times as many Arabs living in the Palestinians Authority today, than there were before 1967? They claim Israel practices apartheid. If Israel was an apartheid state, why are the Israeli Arabs able to vote for their own parties in the government. The Joint List is made up of Arab parties. Ra’am is the Arab party that was trying to work with the government. If Israel was an apartheid state, why are Arabs able to be doctors, lawyers, even Supreme Court Justices? They claim that Israel is trying to take over the Al Aksa mosque, when the Jordanian Wakf has been controlling the area since 1967 and they only people who are not allowed to pray on the Temple Mount are Jews and Christians.These claims are simply not true.

As I write this, rockets are being shot at Israel. My phone’s red alert app, is constantly dinging. My family and friends are running to their safe rooms, if they have them and to shelters if they don’t. Let’s realize that even if a rocket lands in the middle of the street, homes, businesses and property are still destroyed. My daughter’s friend lives in Ramat Gan. The rocket that killed the 55 year old man landed a block and a half away from her apartment. When she returned from the shelter she found her apartment covered in broken glass that was caused by the reverberations of the blast. The media claims that Israel is using disproportionate force because fewer Israelis are killed than Palestinians. This is because over the decades of attacks on Israel, Israel values life and has dedicated itself to protecting her people. At least 1/3 of the rockets sent from Gaza don’t make it out of the strip. Those rockets kill Palestinians living in the Gaza strip, yet their deaths are attributed to Israel.

In the United States, we have the right of freedom of speech. That freedom is only limited when the speech is hate speech. Let’s focus on the difference in looking for ways to learn to cooperate and live together, versus ways to eliminate one nation over the other. Angry rhetoric aside, we can be passionate about our causes without wanting the destruction of the other. The Israelis I know all want peace. They want to live together with their Arab brothers and sisters. They have been demonstrating in Israel with Israeli Arabs showing that they want a shared society. Terror has no place in any society. Shooting rockets indiscriminately at civilian centers, is a war crime. Responding to those rockets is the obligation of any nation in order to protect its civilians. Words are impactful. We should all be rallying to support the cause of peace. Violence begets violence. Extremism doesn’t build fair and fruitful countries. Let’s all rally together for peace. That’s the way to move forward.

About the Author
Stephanie Z. Bonder is a true "Jersey Girl" raised in the beautiful Garden State of NJ. She developed her deep love for Israel when her father first started talking to her about Israel when she was a little girl. The family first went to Israel for her bat mitzvah and her Zionism grew. In college, Stephanie studied at the Hebrew University in Jerusalem for her junior year abroad. Stephanie has dedicated much of her life to teaching young children at Golda Och Academy, a Solomon Schechter Day School in West Orange, N.J. In her volunteer hours, she is part of a 5 generation life member family of Hadassah, the Women's Zionist Organization of America. She currently is a member of the National Board. Stephanie continues to educate teens and adults on Jewish Peoplehood, Zionism and current events in Israel through her involvement with the Jewish Federation of Greater Metrowest and her synagogue, Congregation Agudath Israel. All of her blogs are her own personal opinions and do not represent the organizations with which she is affiliated.
Related Topics
Related Posts
Comments