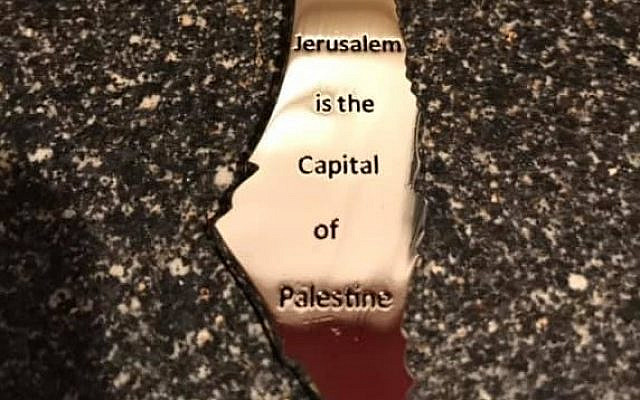 The keychain I was given by AMP members with the map of Israel removed and replaced with the words, “Jerusalem is the Capital of Palestine.” I arrived very early and went inside the building. Muath Salameh is a team member of AMP-Missouri, he was standing near the information table, and he encouraged me to take their literature. (courtesy)

Last Saturday, Rashida Tlaib spoke in St. Louis for American Muslims for Palestine. I live in Missouri, so I protested her talk. I stood in front of the building with a neon pink sign that read, “Rashida Tlaib is an Anti-Semite.” I was not able to hear Tlaib’s presentation, because I wasn’t going to pay 50 dollars to hear her speak. But before the event started, I went inside and took all of their handouts. American Muslims for Palestine also gave out a keychain with the map of Israel removed and replaced with the words, “Jerusalem is the Capital of Palestine.” The keychain was a call for the destruction of Israel and its replacement with Palestine. There is no way to misinterpret a map of a country being destroyed and replaced with a brand new country.

I have a little bit of experience with the Missouri chapter of American Muslims for Palestine (AMP). I have been trying to help pass the Anti-BDS Bill in Missouri. The bill will prevent the state of Missouri from granting contracts to entities that boycott the State of Israel. AMP-Missouri has been fighting the bill, and I have bumped into them at the capital. I have heard them present their message. I also read all of the materials that AMP gave out during the Tlaib presentation.

The materials published by AMP describe the Jewish State Bill, an Israeli Basic Law which specifies the nature of the State of Israel as the nation-state of the Jewish people. The primary argument of the AMP pamphlets was that Israel is an apartheid state, because it is defined as a Jewish State. One pamphlet stated, “The Basic Law: Human Dignity and Liberty, which is considered a mini-bill of rights by Israeli legal scholars, does not enumerate equality; on the contrary, this Basic law emphasizes the character of the state as a Jewish state.” In other words, they claim that a Jewish State cannot grant equality, and therefore it should be dismantled. However, the problem is that the Constitution of Palestine defines Palestine as an Arab and Muslim State, so if American Muslims for Palestine were consistent, then they would be hosting an event to call for the destruction of Palestine.

The Organisation of Islamic Cooperation (OIC) is an international organization founded in 1969, consisting of 57 Member States, which represents a collective population of over 1.6 billion. The OIC is, “the collective voice of the Muslim world.” Despite the fact that the State of Palestine has not been granted full membership in the UN, Palestine was granted full membership in the OIC. In addition, the Arab League is composed of 22 member states, including Palestine. All of this means that Palestine is self-defined as an Arab and Muslim State, and belongs to two organizations founded on the principle of ethnic and religious nationalism.

The day after the Tlaib event, I posted a picture of the keychain on my facebook page, with the following description:

Last night, a couple hundred Muslims gathered in my state to call for the destruction of the Jewish State. Rashida Tlaib spoke in St. Louis for American Muslims for Palestine. They claim that the idea of an ethnic state is a racist concept, and since Israel is the Nation State of the Jewish people, then it is a racist state, and when they call for the destruction of Israel, then they are calling for the elimination of racism. The only problem is that they support Palestine being a member state of the Organization of Islamic Cooperation, which is an organization comprised of fifty-seven nations that define themselves as Muslim States. This means they support Palestine being defined as a Muslim State. They even gave out keychains calling for the destruction of Israel as a lovely keepsake!

The AMP-Missouri director is a Palestinian woman named, Neveen Ayesh. She knows me, and she saw me in front of the building holding my sign. Again, I stated that AMP calls for the destruction of the Jewish State, but at the same time AMP supports Palestine being defined as a Muslim State. Ayesh also saw my post and responded, “Stop spreading false propaganda about our motives.” She wrote several paragraphs, but basically she called me a racist and claimed that I was making false statements about AMP. However, she never named one single thing I was getting wrong about AMP. Ayesh never said that AMP does not call for the elimination of the Jewish State, or that AMP does not support Palestine being defined as a Muslim State. Ironically, by not correcting my two claims, she confirmed that I have described the goals of AMP perfectly.

Ayesh also wrote, “We gathered to organize, mobilize, and continue to educate because we are a people that deserve and will not accept anything less than equality.” But, her organization is denying Jewish people the right to self-determination, while demanding that Palestinians be given the right to self-determination. It is her organization that is denying Jewish people the same rights she demands for Palestinians. In reality, AMP gathered to declare that Jews are not equal to Muslims.

If American Muslims for Palestine are opposed to ethnic and religious nationalism, then as Muslims they should start in their own backyard, they should call for the elimination of the Organization of Islamic Cooperation. Think of the irony of the situation: There is an organization composed of fifty-seven nations, which declare themselves to be Muslim States, but a group of Muslims gathered together in Missouri to call for the destruction of the Jewish State, based on the claim that ethnic states are a racist concept. This also means that Tlaib spoke for an organization whose mission is to destroy the Jewish State and replace it with the self-proclaimed Muslim State of Palestine.