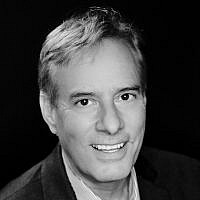 The Blogs
Mason Harris
The Chutzpah Guy
Apply for a Blog
Please note that the posts on The Blogs are contributed by third parties. The opinions, facts and any media content in them are presented solely by the authors, and neither The Times of Israel nor its partners assume any responsibility for them. Please contact us in case of abuse. In case of abuse,
Report this post.

These are some of the many powerful descriptions I hear and repeatedly read, as RBG’s life and legacy are honored.

Ruth Bader Ginsburg, an inspiration to so many – even those with whom she may have disagreed, leaves a void not just on the Supreme Court, but on the landscape of our country.

Her career is an improbable path of achievement, undoubtedly fueled by the chutzpah that would never, not for a moment, allow her to quit even when facing insurmountable odds.

The daughter of an immigrant father and a mother born only four months following her parents’ arrival in America, she understood what it was to be an outsider. More importantly, she valued the opportunity and good fortune afforded to her merely by being an American citizen.

Good fortune? Yes, and as every system can be improved, RBG’s mission and purpose were to contribute to an even better way of life for her fellow American citizens.

Despite her brilliance and degree from Cornell University, she experienced firsthand the prevalent negative thinking that led many employers to fire pregnant employees. Newly pregnant with her first child, she lost the job it took so long to find.

A short time afterward, with the shared responsibility of caring for a newborn daughter, she was accepted to Harvard Law School and later transferred to Columbia when her husband’s job brought the family to NY.

Begrudgingly accepted by her law school peers despite her academic success, the discrimination accelerated as she had difficulty finding a job following graduation.

Although seen as a trailblazer in fighting for women’s rights, she recognized that gender discrimination was an issue impacting men as well. Are you familiar with this 1975 case that she argued to the Supreme Court with fellow attorney Melvin Wulf? Ginsburg fought for the child care benefits typically awarded to women, but on behalf of a man who had lost his wife during childbirth. They won the case on their client’s behalf; the widower and child received the benefits. Actually, we all won because of that decision and her ability to work around obstacles.

We can also learn from her ability to separate her beliefs from the differing thoughts of colleagues. Her deep friendship with Justice Antonin Scalia, who passed away in 2016, is proof. One can be strongly opposed to another’s viewpoints while still communicating, respecting, and considering their at-odd views. This friendship is an even more important lesson for us in today’s “hyper-rejection of other ideas” environment.

Ginsburg’s life is filled with struggles and successes on behalf of others. She epitomizes the constructive chutzpah that is available to us all.

And now, even in death, she’s a trailblazer. She is the first woman, and the first person of the Jewish faith, to lie in state at the Capitol.

Ruth Bader Ginsburg, may your memory be a blessing for all.

Note: This article was inspired by my daughter, Dana, who called me with the sad news of RBG’s passing and suggested I immediately put aside my other work and write a piece about her importance to us all. Dana, you were absolutely right, thank you!