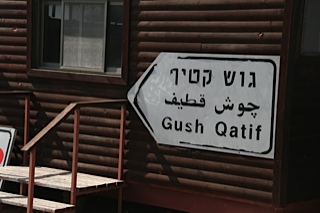 A memento from home

It was clear from the outset that Israel always had second thoughts about its unilateral withdrawal from the Gaza Strip in 2005. I remember watching live on TV the moment that Israel pulled out for good: the barrier at the crossing swung down and sprang back up again, bouncing up and down a couple times more before finally making up its mind.

Nine years later, with Gaza kidnapped by Hamas and used as a launchpad for incessant rocket attacks on Israeli towns, debate rages over whether the Disengagement was one massive mistake. Less controversial is that the Disengagement was one of the worst-planned policy initiatives in Israeli history. I travelled to the south of Israel with the One Israel Fund to see for myself the fate of the 8,000 settlers who were forcibly evicted from their homes in name of peace.

THE GUSH KATIF Visitor Centre recently opened its doors in Nitzan, a ‘refugee camp’ according to our guide Eve Harow, but more accurately a transit camp for Gush Katif evacuees, situated on the road to Ashdod from Ashkelon. The town is still dominated by what Israelis call ‘caravans‘: portable box containers that were meant to serve as temporary houses for the evacuees, but have since become their permanent homes.

Walking through the multimedia exhibition is like stepping into a pop-up family photo album, nostalgia stained onto the pages. If you’re looking for historical, political or legal context, read a book on the bus: this is an exploration of the human tragedy of the destruction of homes and communities through the eyes of the expellees, politics be damned. One heartrending video shows a soldier arriving to evict a family, who berate him for not even knowing their names: “Know whom you’re expelling!” they sob at the soldier, who is no less distraught than they.

From destruction, new life will grow

Gush Katif is now rubble: the Palestinian Authority wanted the land for development, and Israel was hardly keen for its citizens’ houses to be turned over to the terrorists who had effectively chased them out. Synagogues were torched, stripped of metal for rockets or converted into military HQ. It is a trauma that has clearly not been forgotten.

Given the strength of the opposition to the Disengagement, it is perhaps surprising that it was so relatively peaceful. “This could have been a replay of the destruction of the Second Temple,” says Eve: “Jews kill each other and the Romans just mop up.” Nobody could take for granted that a confrontation between an army and its own civilians would not result in bloodshed: and yet, the state and society endured.

Nevertheless, Eve was bitterly disappointed with the Left’s lack of empathy during the Disengagement: “these people made a sacrifice for your ideology”, she says, adamant that Israeli leftists should have been the first to offer support and assistance to the evacuees. She also thinks this lack of empathy for settlers evicted from their homes is a major strategic mistake: the Palestinians have suffered in this conflict, and they can only reconcile themselves with compromise if they believe that Israel is paying a heavy price too – but so long as the Left treats the West Bank as a bargaining chip that can be painlessly handed over, the Palestinians will refuse to sign a deal that leaves them freierim (suckers).

“So if you’re not grieving, at least pretend to.”

BE’ER GANIM IS home to the largest community of Gush Katif evacuees, 120 families in all. There is land for nearly 500 more, but construction – on a design mimicking the characteristics of the old neighbourhoods – is only just getting off the ground. Nine years after the Disengagement, Be’er Ganim still uses a marquee for a synagogue, surrounded by the shells of unfinished houses. 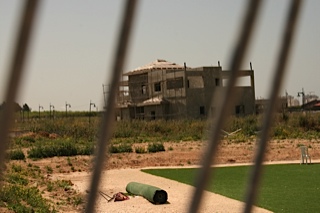 It is clear that the Disengagement, carried out in a hurry, was executed with virtually zero thought given to the day after. Many evacuees are still paying mortgages on houses that have long since bulldozed. Many farmers have not yet been given agricultural land; they have lost their markets anyway, and the older ones among them cannot start afresh. Many are reduced to paying for food out of their compensation packets. Countless evacuees are still living in ‘caravans’, because the state has found the cash to expand settlement construction but not rehouse former settlers.

Part of me wonders whether Ariel Sharon’s real legacy will be to have scuppered a withdrawal from the West Bank by shattering Israelis’ faith in their own ability to do so competently. Visitors are left with the impression that Israel could never plausibly repeat this ordeal in the West Bank, on a scale ten times larger: and perhaps this implied message is the point of the exhibit, built in the heart of a community that voted virtually unanimously for right-wing parties last year.

But still, despite the total failure of support to get back on their feet, Gush Katif evacuees are slowly rebuilding their lives, and proudly sending their children to the very army that evicted them. We are greeted in Be’er Ganim by Avi Burstein, head of the community, proudly bearing his produce: the most delicious organic cherry tomatoes you have ever tasted. “You can’t rehabilitate people if you’re crying all day long,” he says. “Don’t pity us. Am Yisrael Chai [the People of Israel lives].”

One cannot help but think how history would have turned out differently if the Palestinian refugees have had this same can-do, forward-thinking attitude. The Gush Katif evacuees faced the same choice as the Palestinian refugees in 1948: they too could have remained in refugee camps indefinitely, refusing to concede that what was lost was lost, and conspiring to forcibly reconquer their former homes. What a tragedy that the Arab leadership never allowed the Palestinians to rebuild new lives in new homes, encouraging them to cultivate hatred and bitterness instead of succulent cherry tomatoes and cucumbers.

IN A FAR-OFF corner of Israel, wedged between Egypt and the Gaza Strip, is the man-made oasis of Bnei Netsarim. Half a mile from the Sinai Desert, former settlers from Gush Katif are growing vegetables in the sand. “How on earth are you doing this?” I ask Pinhas, who grows tomatoes in his vast desert hothouses, purchased with his compensation money. He looks at me, perplexed: “No problem. A little fertiliser, add water,” he says with a casual shrug. Gush Katif used to account for ten percent of Israel’s agricultural produce. Now its former inhabitants are Israel’s new pioneers, fulfilling Ben Gurion’s longstanding dream of making the desert bloom. 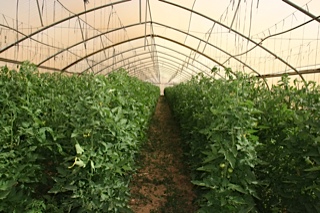 A land flowing with cherry tomatoes and red peppers… in the desert.

In Gaza, Israelis used to make the desert bloom with the help of Arab labour. Now they rely on Thai manpower, while their former employees languish under Hamas tyranny. Days before the Disengagement, Eve spoke to Palestinians facing redundancy as their employers were evicted. “The blessing came with the Jews,” the Arabs told her mournfully, “and the blessing will go with the Jews.” Eve was left stunned.

As demonstrated by the recent calls to boycott SodaStream, whose Arab employees earn considerably more than elsewhere
pro-Palestinian activists often overlook the inconvenient truth that a sudden and total Israeli withdrawal would be economically and socially devastating for the many Palestinians who rely on Israeli business. Even when Britain folded up its empire, it didn’t ship all its investments away too. It is difficult to see how a sustainable peace could be achieved if a Palestinian state were purged of all things Israeli: this too would bear a human cost.

Life in Bnei Netsarim is not easy. This is the back of beyond: there was nothing here till recently. Perhaps that’s why under certain proposals for a one-for-one land swap between Israel and the Palestinians, this wilderness is meant to be traded for peace. This is frontier territory, closer to Egypt than any town in Israel. Despite the construction of the security fence along the Egyptian border, there are “daily” infiltrations – mostly drugs smuggling, but the possibility of infiltration by terrorists is real, which is why this farmer performs his guard duty with a rifle.

“We also have a problem with rockets,” he adds as an afterthought.

It is perhaps an ironic twist of fate that it is from Jewish settlers that Palestinian refugees could learn how best to resurrect and rehabilitate broken communities on new land, in another corner of their now irreversibly partitioned homeland. If the Palestinian leadership is serious about building a Palestinian state alongside Israel, they should look no further than southern Israel for inspiration: only when people have a reason to move on will they be able to let go of the past.

Visit the One Israel Fund website to book a tour.