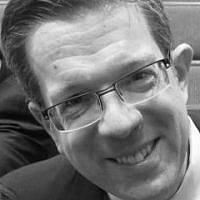 The Blogs
Zevi Fischer
Apply for a Blog
Advertisement
Please note that the posts on The Blogs are contributed by third parties. The opinions, facts and any media content in them are presented solely by the authors, and neither The Times of Israel nor its partners assume any responsibility for them. Please contact us in case of abuse. In case of abuse,
Report this post.

From the time I was a young boy, I have been taught that everyone was present when we received the Torah at Mount Sinai, even the unborn souls.  I have always accepted this teaching to include even me, born in 1972. But from where do we derive this miraculous idea, that we were all present? And, who else was included?

The Midrash Tanḥuma, a compilation of explanatory works on the Torah (named after the late-4th-century sage, Tanḥuma bar Abba), states as follows:

You should know that every soul, from Adam to the end of the world, was formed during the six days of creation, and that all of them were present in the Garden of Eden and at the time of the giving of the Torah, as it is said: “But with he who stands here with us this day, and also with those who are not with us here today.” (Deuteronomy 29:14).

The Talmud, in Tractate Shevuot (39a), further expounds this particular verse, found in Deuteronomy 29:14, regarding that moment in Moab, when the Jewish nation reaffirmed their covenant at Mount Sinai, as follows:

From the phrase: “But with he who stands here with us this day” (Deuteronomy 29:14), I have derived only that those who stood at Mount Sinai were included in this covenant. From where do I derive that the subsequent generations, and the converts who will convert in the future,were also included? The verse states: “And also with he who is not here with us this day. (Deuteronomy 29:14).”

As can been seen from these sources, as well as many others, the Torah notes the inclusion of two distinct groups among all of those who were present: (1) the unborn souls of future generations; and (2) the converts.  However, a closer examination of Verse 14 suggests that we should also recognize the inclusion of an additional group.  Verse 14, in its entirety, reads as follows:

But both with those, who are standing here with us this day, before the LORD our God and with those who are not with us here this day.

The Vilna Gaon, Rabbi Eliyahu ben Shlomo Zalman (1720 – 1797), in his classic work, Aderet Eliyahu (Deuteronomy 29:14:1), notes the unique structure of Verse 14.  Specifically, the word “עֹמֵ֣ד standing,” is placed in the verse’s second phrase, as opposed to the first phrase.  In other words, the word “standing” is not mentioned with the phrase “those who are . . . here.”  The reason is to highlight that everyone was present, but not all of those who were present were necessarily appearing to stand.

Perhaps, the Vilna Gaon is one more source which supports the idea that all souls, even the unborn souls, were present.  However, I would like to suggest a different understanding. By noting that not everyone who was present was actually standing, we are also including those who could not stand at the covenant.  Indeed, we are including those who, for what ever reason, cannot stand like everyone else. In the world, there are those with perceived challenges, special needs, “limitations” who may not be able to “stand” as others stand.  Nevertheless, they were equally present and accounted for.  They were fully included in the covenant at Sinai, as well as our reaffirmation at Moab of the covenant.

We can also commemorate this glorious holiday of Shavuot by making every effort to include everyone, just as all were included when we received the Torah.  Whether by accommodating those with special needs in our synagogues, by ensuring that every child has a place in our synagogue youth departments, or by simply arranging a holiday play-date with a child with special needs, we can make this Shavuot a truly inclusive event.

About the Author
Zevi Fischer is an attorney who practices in the area of real estate litigation. He was born and raised in Forest Hills, New York. He now lives in Teaneck, New Jersey.
Related Topics
Related Posts
Comments