This is a maddeningly confusing moment in Israel’s relations with the Middle East. Israel could be headed toward two opposing realities simultaneously: on the one hand, devastating war with Iran and its proxies; on the other, unprecedented possibilities for peace with parts of the region. We need to pay attention to both threat and opportunity.

Since 2012, when the IDF launched its campaign of attacks to prevent Iranian forces and advanced weapons from converging on its borders, Israel and Iran have been effectively at war. So far, Iran has been wary of retaliating, fearful of the Israeli reaction, which will be severe. But as the IDF has repeatedly warned the Israeli public, it is just a matter of time before the conflict escalates. Tens of thousands of missiles and rockets are aimed at Israel’s cities and towns; and not even Israel’s impressive anti-missile defense system will be able to stop massive devastation.

The US killing of Iran’s military chief Qasem Soleimani may have brought the next phase of the Israeli-Iranian war closer. And yet few in Israel opposed the assassination. Israelis take the Iranian regime’s genocidal rhetoric seriously, and see in its destabilization of the region proof of its murderous credibility. With Iranian proxy Hezbollah in Lebanon, Iranian Revolutionary Guards in Syria, and Iran-backed Hamas in Gaza, Israel is now effectively surrounded by Iranian and pro-Iranian forces – a process directed by Soleimani.

For Israelis this isn’t about Trump or Obama but about facing a potentially existential threat. A near-total consensus exists here on the need to confront Iranian expansionism. The country is now entering round three of this year’s interminable election campaign, and yet, for all the bitterness, not one politician across the mainstream spectrum has challenged the wisdom of Israeli attacks against Iranian forces. No one is warning about “recklessness” or “military adventurism.”

Israelis tend to dismiss those voices in the West that blame current tensions on the collapse of the Iran nuclear deal. For Israelis, that deal all but ensured the inevitability of war with Iran by empowering it to become the regional bully – even as it remained on the nuclear threshold, biding its time. Nostalgia for the Iran deal is a dangerous illusion.

But even as we prepare for intensifying confrontation with Iran, we need to begin paying attention to another potentially historic development in the region — a shift in Arab and Muslim opinion on Israel.

Consider the experience of my friend Linda Menuhin, who as a young woman escaped Iraq in 1970 after the regime hanged nine Jews in a public square, and who today runs a social media project at the Israeli Foreign Ministry reaching out to the Iraqi public. A quarter million Iraqis have responded to her Facebook posts, says Linda, and “95 percent are positive.” Many express longing for Iraq’s vanished Jews, linking the country’s decline with their mass expulsion.

And then there is the extraordinary emergence of the Arab Council for Regional Integration, the first pan-Arab peace movement. This past November, thirty prominent figures from 15 Arab countries met in London to found the Council and declare their opposition to the boycott against Israel, calling instead for normalization of relations. Council members include leading journalists, former government officials, prominent social activists. Conference participants delivered thoughtful papers about ways to break the 70-year Arab siege against Israel, from developing technological and scientific cooperation between Arabs and Israelis to countering anti-Semitism in Arabic media.

The conference provoked an essential debate about relations with Israel on Arabic social media, along with vehement denunciations from Iranian and Muslim Brotherhood media, which only confirmed the effectiveness of the Council’s initiative.

Why is all this happening? Partly of course because of the Arab world’s fear of Iran, which has led to an unprecedented strategic alliance between Israel and Saudi Arabia and other Sunni states. But there are deeper reasons too. As Council members made clear in their London presentations, the Arab world’s obsession with Israel has backfired, creating a poisoned culture of hatred and paranoia that prepared the ground for the self-devouring of Syria, Iraq, Yemen, Libya. After a decade of atrocity, many in the region have wearied of the war against Israel’s existence.

When student protesters at Tehran University pointedly refused to tread on US and Israeli flags laid out on the pavement, they were making precisely this point: Our problems are not Israel’s fault. 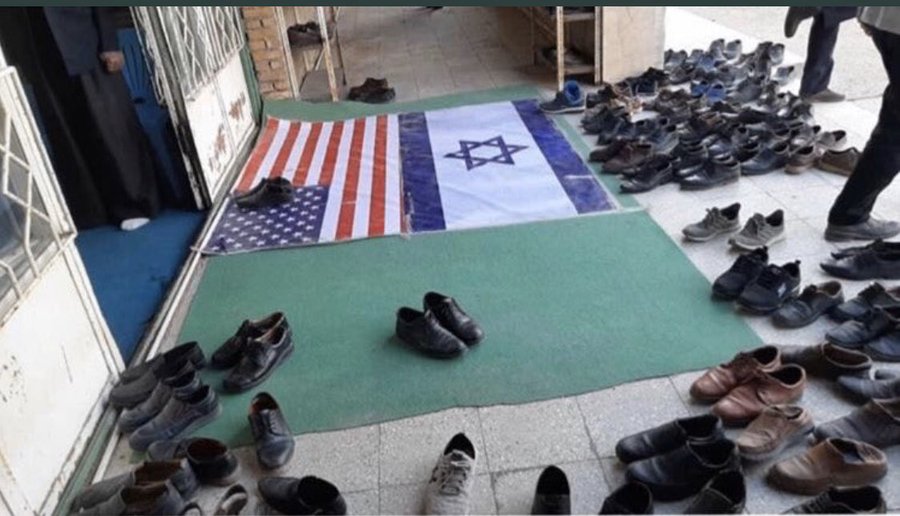 Illustrative: Tweeted photo identified as a Mosque in Iran’s Khuzestan province where worshippers were said to decline placing shoes on US, Israel flags

In my own limited attempts to reach out to Palestinians and the Arab world generally, I’ve encountered something of the change in regional attitudes toward Israel. Last year I published a book called “Letters to My Palestinian Neighbor,” which attempts to explain Zionism and Israel to my Palestinian neighbors and to Arabs generally. The book was translated into Arabic and offered for free downloading, and responses (many of which can be found at the book’s website) have come not only from Palestinian society but from across the Arab world from Egyptian bloggers to Syrian refugees. One Saudi religious leader wrote to me saying he never realized that the Jews and the Hebrews were the same, and so of course Israel is an indigenous part of the Middle East. A leading Saudi news weekly, Al Majalla, devoted two pages to a highly favorable review of “Letters.” Who could have imagined such responses even a few years ago?

True, there will likely be no Palestinian-Israeli peace process anytime soon. Palestinians and Israelis regard each other with profound wariness, and both sides have done what they can to earn that mistrust.

Where then does that leave us?

That will require deepening the Israeli alliance with Saudi Arabia and other Sunni states from an entirely strategic basis to a more nuanced relationship, including diplomatic and economic ties. But for that process to reach fruition, we will need to address the Palestinian tragedy.

Israelis view the Arab-Israeli conflict through a kind of split screen in our heads. On one side of the screen, it is Israel versus the Palestinians, and we are Goliath and they are David; but on the other side of the screen it’s Israel versus the Arab and Muslim worlds, and the power dynamic becomes more complicated. Reducing the regional dimensions of the conflict would go a long way toward easing justified Israeli security fears of a Palestinian state.

Meanwhile, we need to strengthen those positive forces in the region – like the Arab Council for Regional Integration, which is planning a public campaign against the anti-Israel boycott. At the same time, we need to resist attempts by the Israeli right to annex parts of the West Bank, which would end the possibility of a regional solution and doom us to the nightmare of a bi-national state. And we need to shun those voices within the Jewish community that portray the Islamic faith as inherently anti-Semitic, and 1.7 billion Muslims as an implacable foe.

Navigating relations with a changing Muslim world will require ideological dexterity on the part of Israelis and Diaspora Jews. That means parting with instinctive rightwing reactions that tend to dismiss the possibility of peace and leftwing reactions that tend to downplay the Iranian threat. It means adopting policies that project hope without naivete, realism without despair. It means preparing for a war that is being forced on us, even as we nurture unexpected stirrings of peace.