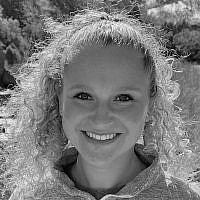 The Blogs
Ellie Fajer
Apply for a Blog
Advertisement
Please note that the posts on The Blogs are contributed by third parties. The opinions, facts and any media content in them are presented solely by the authors, and neither The Times of Israel nor its partners assume any responsibility for them. Please contact us in case of abuse. In case of abuse,
Report this post.

In my campus Hillel and many other Jewish spaces, bal tashchit — the commandment of avoiding wasteful destruction — has become a central tenet of the Jewish environmental ethic. Whether by preventing food from going to waste or turning off the faucet while brushing teeth, it’s easy to see the relevance of this value in everyday life. However, our daily commitment to bal tashchit matters most in a place where waste isn’t as visible or obvious: our meat consumption.

One way to look at this is through examining the water footprint of meat, or how much water is needed for its production. For instance, producing a single hamburger takes around 450 gallons of water — as much water as taking a 3½ hour shower. A single hamburger.

But why do animal products require so much water to produce? The water needed to produce a hamburger isn’t just the water a cow needs to drink. Most of meat’s water footprint is actually from the water needed to grow livestock feed. This introduces an unavoidable inefficiency into the water use on our plates.

While any plant-based food still requires water to produce, the inefficiency of animal products is staggering: compared to the 450 gallons of water required for a beef hamburger patty, a soy-based veggie burger only uses about 30 gallons. Meatless alternatives have drastically lower carbon footprints and environmental impacts as well, all while providing around the same amount of protein per bite.

If we zoom in on the water footprint and impact of beef: over 80 percent of cows spend much of their lives in feedlots, where they rely on irrigated feed crops mainly grown in the American plains and the West. These regions are facing severe droughts and water scarcity, especially across the Colorado River Basin that provides water to much of Colorado and the West. Amid these exceptional drought conditions (glaringly apparent by the record low levels of Lake Mead), we’re seeing restrictions being placed on residential water use. All the while, about 80% of the water in the Colorado River Basin is actually used for agriculture — with about half being used directly for cattle feed crops like alfalfa and hay.

And this wasteful use of water is even more concerning given the increasing severity of droughts and aridification with climate change. At the current rate of water consumption across the Colorado River Basin, Lake Mead could drop down to a “dead pool” level within a few years — a level so low that water will stop flowing to Arizona and California. Nearby, Lake Powell is only a few dozen feet away from dropping so low that the Glen Canyon Dam will no longer generate electricity to 300,000 homes between Nevada and Colorado.

As we are confronted by such a severe drought, one of the biggest ways Jewish communities can reduce their water footprint and avoid wasteful practices is by shifting the food they serve, specifically by reducing the amount of meat and dairy served. An effective strategy to promote more sustainable food practices is to make delicious, plant-based foods the default option in buffets and plated meals, while still giving people the choice to opt-in to animal products. This can reduce the water footprint of food served by up to ⅔, saving thousands of gallons of water per Shabbat dinner or other meal. Jewish communities are increasingly recognizing the power of these shifts in supporting drought resilience and reducing environmental impact, such as Stanford Hillel featuring a plant-based default for certain Shabbat dinners.

Between the worsening droughts and continued overuse of water resources for agriculture and meat production, the time for change is now. In this critical moment, we must re-center ourselves and our institutions around our Jewish values and uphold bal tashchit on our plates.

About the Author
Ellie is pursuing a double major in Biology and Earth Systems at Stanford University, with a specific focus on how our food systems can be reimagined to best promote human and planetary health. She works with the Jewish Initiative for Animals and The Farmlink Project to build a more sustainable and just food system. Ellie is from Denver, Colorado.
Related Topics
Related Posts