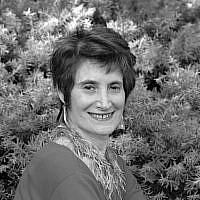 The Blogs
Fredricka R. Maister
Apply for a Blog
Advertisement
Please note that the posts on The Blogs are contributed by third parties. The opinions, facts and any media content in them are presented solely by the authors, and neither The Times of Israel nor its partners assume any responsibility for them. Please contact us in case of abuse. In case of abuse,
Report this post. 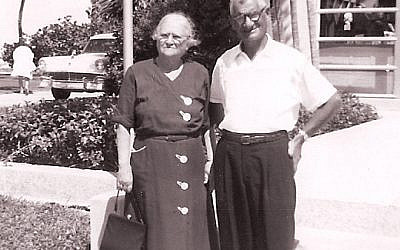 The author’s maternal grandparents on a visit to Florida, 1959 (The Browdy Family Archives)

At first, the shocking news of Russia’s unprovoked invasion of Ukraine on February 24, 2022 did not seem to personally affect me, an American Jew far removed physically, culturally and politically from the action abroad. Like many people, the outrage and anger I felt were generic human responses to a David and Goliath scenario when an underdog nation unjustly falls prey to a brutal aggressor with superior military might and resources.

Ironically, I can trace my ancestral roots back to Russia, Ukraine in particular. However, for me, that ancestry has always been a mere coincidence, a matter of genealogical interest only. It did not connect me to the war on Ukraine I was witnessing on television.

My maternal grandfather came from Nizhyn, a town an hour north of Kiev, now Kyiv, the capital of Ukraine; my grandmother, from the seaport city of Odessa in Eastern Ukraine, now Odesa in Ukrainian. My grandparents always considered Russia their country of origin. Ukraine was never mentioned as part of the ancestral mix; Ukraine just happened to be the region in the Russian Empire where their roots had been planted hundreds of years before.

First and foremost, they were Jewish, their primary identity based on their religion. Yiddish was their first language. Russian was spoken outside their home to interact with the non-Jewish locals in town. Growing up, I never heard them speak a word of Russian, least of all Ukrainian.

I know virtually nothing of my grandmother’s backstory as she came to America as a child, too young to have memories of life in Odesa. My grandfather, on the other hand, never hid his deep-seated hatred of Russia; he barely spoke of his early life there unless prodded and then, grudgingly.

To me, Russia seemed so foreign, exotic and intriguing, sparking my interest so much that I decided to study Russian. I expected my grandfather to be proud of me for taking the initiative. I hoped I would eventually be able to communicate with him in Russian. Instead, he got mad at me, asking, “why do you want to study Russian? What for? We are Americans!” I quit my study of Russian soon afterwards.

I understood how my grandfather felt. Life in Russia was not easy for my family, the Brodskys, given the rampant antisemitism that swept the provinces of the Russian Empire which ultimately led to pogroms, the violent attacks by Ukrainian nationalists and Cossacks that included assault, looting, rape and murder against the Jewish population. I learned about one such pogrom from my Aunt Gussie, my grandfather’s youngest sister who suffered horrific nightmares throughout her life because of it. I remember her telling us how the family scattered and hid wherever they could—some to neighbors, others to the railroad station, her father to the attic—and how their non-Jewish landlord persuaded the attackers there were no Jews in his house.

Given the threat of more pogroms and the possibility of military conscription of the young Brodsky men into the Czarist army, my grandfather, along with two brothers and two sisters, fled to America in the early 20th century in the years before the Bolshevik Revolution in 1917. With the Revolution, all emigration and communication halted between Russia and America, leaving three younger brothers behind, never to be heard from again.

As a little girl, whenever I asked, “Poppy, what happened to your brothers in Russia?,” my grandfather would mutter, “Hitler.” Even at that tender age, I knew what that meant: they perished in the Holocaust.

Many decades later, when I met some of those brothers’ daughters who had emigrated to New York from the Soviet Union in the 1980’s and 90’s, I learned that one brother, because of his business, did not join the family who had fled eastward to avoid the Nazi advance. I often wonder whether he was among the almost 34,000 Ukrainian Jews massacred in a ravine in Babyn Yar outside of Kyiv. This past March, the memorial site was hit by Russian missiles and shells during the battle of Kyiv.

As the war has raged on, I have become a Ukraine news junkie. I turn on the TV throughout the day to keep on top of the breaking news which is always upsetting with new horrors to report. Every morning I check to make sure that Ukraine’s Jewish President, Volodymyr Zelensky, and his family are alive and well. I feel compelled to talk about the bloodshed in Ukraine in every phone and person-to-person conversation I engage in.

Memories of my grandparents constantly pop up. I wish I could tell them the scourge of antisemitism is not what it was in their day. To be sure, antisemitism still exists, even in their beloved America and it will always exist, but they also need to know that President Zelensky was elected with over 73 percent of Ukrainians coming out to support him.

How could my family not be proud of this 44-year-old leader who has been likened to Winston Churchill as he rallies the Ukrainian people to fight for their freedom and the cause of democracy. How easy and convenient it would have been for him, a likely target for assassination, to accept President Joe Biden’s offer to evacuate him to safety. “I need ammunition, not a ride,” he said, choosing to stay with his fellow Ukrainians in their darkest hour. He has become a hero, a paragon of strength and resilience to the world and to Jews everywhere.

When I see the graphic images captured on TV of the bombing of civilian targets like maternity wards, hospitals, schools, theaters, and railway stations, I am consumed with rage. To see mass graves hastily dug and body bags dotting the landscape is gut-wrenching. As I witness besieged Ukrainians retreating into bomb shelters, the utter decimation of Mariupol in southeastern Ukraine, the mass exodus of refugees with only the clothes on their backs and one suitcase, with little kids in tow—one little girl holding onto her doll—my heart breaks.

And then there is the haunting image of the woman in Bucha, her corpse left in the gutter for a month after being gunned down by Russian tanks while walking her bicycle, her red manicured nails revealing her identity.

With such disturbing images fixed in my mind, how can I remain just a detached onlooker? Had my family not emigrated to America or died in the Holocaust, they too might have been among today’s Ukrainians suffering and dying in this contemporary tragedy.

After weeks of war and news coverage, you’d think I’d become emotionally numb and empathy-fatigued, but no, I stay glued to the TV, my lifeline to the Ukrainian people with whom I now feel a distant but personal kinship. To think, just a few months ago, they were just blips on my genealogical radar.

With my new mindset, I’ve reached out to my cousin Victor who was born in Lviv (Lvov at the time of his birth), grew up in Poland and Israel and now lives in Chicago. He still has his Russian passport, and has decided, upon its renewal, to change his nationality to Ukrainian. “I don’t want to be associated with those people [Russians],” he tells me.

Like Victor, I too want to embrace my Ukrainian roots as part of my identity. I am honored and proud to add my voice in solidarity with the Ukrainian people:

About the Author
Fredricka R. Maister is a Philadelphia-based freelance writer. Her personal essays and articles have appeared in a variety of print and online publications, including The Baltimore Sun, Miami Herald, Chicago Tribune, Philadelphia Inquirer, The Writer, OZY, Aish-com, The Forward, Baltimore Jewish Times, Jewish Journal (Los Angeles), New York Jewish Week, and The Times of Israel. You can find her on Facebook.
Related Topics
Related Posts
Comments