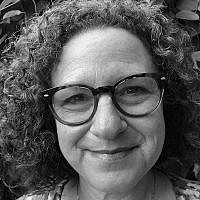 The Blogs
Leslie Ratner
Apply for a Blog
Please note that the posts on The Blogs are contributed by third parties. The opinions, facts and any media content in them are presented solely by the authors, and neither The Times of Israel nor its partners assume any responsibility for them. Please contact us in case of abuse. In case of abuse,
Report this post.

Recently, I traveled to Dubai to experience for myself the new relationship between Israelis and Emiratis. I attended the historic “Rebuilding Abraham’s Tent: Historic Kinship, Future Alliances” event.  As an Israeli – American born to an American mother and Israeli father, I have a strong interest in the new opening of our borders and hearts between Israel and the UAE.

My father, after serving in the army, left Israel in 1954 to go to America to get a University education. He settled in St. Paul, Minnesota where he had 3rd cousins that would help him in the enormous process of settling into America while being a student. My father and mother met at a B’nai Brit Hillel party, they married and had 3 children.  I am the youngest and was very close my father; we were like minded.  My father, Shalom z”l, never wanted to be a “yored” his whole life. He always wanted to return to Israel.  He would say, “Israel was where we really belonged”.  So, my husband, David, and I made aliyah in 1993 with our 2 year old son, Ariel.  My father and his second wife, Avi, returned to Israel in 1998.

The first years of my father and Avi’s life in Netanya were glorious.  They loved being near my family and their families. They loved the culture, the food and their apartment’s  beautiful sea view.  After ten years, their experience of Israel turned sour.  The rudeness, the selfishness, the “me” first, “I’m not going to be a frayer” attitude was very upsetting.  The more serious and disturbing realities of Israeli life took a great toll on them.  In Addition, the pathetic state of national politics, the “oppression” of Palestinians and the violence of intifadot were frightening, sad and disillusioning for them.  They were terribly worried about the selfish values our kids were exposed to, the dangers of the army and discrimination against Palestinians. My father said to us that he didn’t understand how we could stay here and endanger the emotional and physical welfare of our precious kids.  That was devastating to hear. My zionism was based on living, supporting our one and only Jewish state during the good times and the bad times.  Shalom z”l, out of his greater love to be close to us, disengaged from daily news and stayed in Netanya.  My father desperately wanted peace for everyone.  As usual, I listened to his fears, his concerns, his hopes and dreams for Israel and subsequently for all people.

The main reason I traveled to Dubai was to realize and witness my father’s dream of Arab/Israeli reconciliation and cooperation. The monumental event I attended at the Crossroads of Civilizations Museum, was the initiation of a new relationship between our people and our cousins. At this event, Danny Hakim and Jordan Polevoy explained the long term historical Jewish presence, nearly 900,000, in many of the middle east Muslim/Arab countries. Nearly all of the Jews were expelled from these countries. The exhibit and event were unprecedented as distinguished Israeli and Emirati officials announced the opening of a heritage museum to be built in Jerusalem documenting the history and expulsion of Jews.  This was the first time an Arab country took responsibility and acknowledged the expulsion. I have never before had such hope for future generations and the fulfillment of friendship between Arabs and Israelis. The event brought tears to my eyes and a warm open heart.  My father would’ve been ecstatic.

The concept of “Tolerance” has developed a negative connotation implying that another person or group’s beliefs or behavior is wrong and you avoid conflict by not challenging them. However, I looked up the dictionary definition and found the real meaning which is “willingness to accept behavior and beliefs that are different from your own, although you might not agree with or approve of them”.  The common usage implies non-acceptance and begrudgingly listening or acknowledging.  We are trying to build new bridges between people that have a long history of conflict. The common negative association may not be the best word for building a connection with the Emiratis or the other cousins that will follow in line.  Positive terms are inclusivity, mutual acceptance/respect or welcoming.

I have had an adverse reaction to this word in the situations that I’ve seen it used: such as in a school’s tenets description, in religious conversations, in the title of conferences, programs and institutes.  After reading much about the definition of tolerance, I’ve come to understand even more why I have such an adverse reaction.  Tolerance means many different things to different people and it’s left unknown what is actually meant. The names of an institute/treaty/partnership/agreement that it’s aims are creating mutually respectful, open, welcoming, trusting, inclusive new relationships the word tolerance should not be used.  As Mr. Ahmed Obaid Almansoori, founder of the Crossroads of Civilizations Museum in Dubai, said so eloquently to me, at the event:  “I don’t like the word tolerance either, it’s cold and negative.  I suggest in it’s place: inclusivity or welcoming.  That’s exactly how I felt at the monumental event under Abraham’s tent in Dubai-welcomed warmly and included. My father, Shalom z”l, is beaming from heaven.

About the Author
Leslie is an ordinary, caring and very concerned citizen that made aliyah in 1993 from the USA. She is a retired Pre-School teacher with extensive and diverse volunteer experience.
Related Topics
Related Posts
Comments