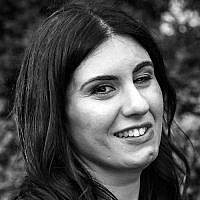 The Blogs
Aviva Edelstein
Apply for a Blog
Please note that the posts on The Blogs are contributed by third parties. The opinions, facts and any media content in them are presented solely by the authors, and neither The Times of Israel nor its partners assume any responsibility for them. Please contact us in case of abuse. In case of abuse,
Report this post.

I recently discovered and then rediscovered an ancient healing prayer. I first learned of it a few years ago in a personal context, and then more recently in conjunction with the Covid-19 vaccine.  It is a prayer to be recited prior to taking any medication or undergoing any medical procedure, however minor, even several times a day.  “May it be Your will, Hashem, that this endeavor cure me, for You are a free Healer.”  After the medical intervention, the prayer continues: “Blessed is He who heals the sick.”   Intrigued, I chose to embark on a research journey which led me to a string of inspiring people and moments, connected by this holy plea and recognition of God as the source for all healing.  I believe I have discovered a hidden treasure, for although it is written plainly in classical Jewish literature, it has become obscure and remains etched in our tradition, ready to be revitalized, and transformative for all types of healing experiences.

Rabbi Yosef Karo writes in his treatise of Jewish law, the Shulchan Aruch that when one is ready to let blood, one should say, “May it be Your will, Lord, my God, that this undertaking should be a cure for me, for you are a Free Healer.”  Afterward, he should say “You are/ Blessed, Healer of the sick” (Shulchan Aruch Orach Chaim 230:4).  Commenting on this statement, Rabbi Yisrael Meir Kagan, also known as The Chofetz Chaim writes: “One should say this likewise before any medical treatment.  One should not believe that anything can cure him without the agency of the Creator, may His Name be Blessed, and one should therefore place his trust in Him by means of this prayer and request of Him that it should serve as a cure for him” (Mishnah Berurah 230:6).  The Chofetz Chaim reiterated this prayer and clarified that it is not exclusive to a particular treatment, such as bloodletting, but rather it is applicable to administration of a remedy of any kind.

After I discovered these sources, grounding the prayer in a rich tradition of Jewish exegesis, I sought to obtain laminated copies of the prayer which I could share with friends.  I reached out to the website RefuahCard.com and immediately received a response from Rabbi Dr. Chaim Abittan.  I asked Dr. Abittan if there was anything additional that he would like to share about his experiences with this prayer.  Little did I  anticipate the abundance of sources, stories, and illustrations of divine intervention that would follow.

While Dr. Abittan was doing his fellowship in the liver transplant department of Mount Sinai hospital in NY, there was a particular high-risk patient he was assigned directly by the department chief.  The patient was Aidel Krohn z”l, and her husband happened to be the brother of Rabbi Paysach Krohn.  Dr. Abittan spent Shabbat with the couple and they developed an especially close relationship.  When Dr. Abittan checked in on Krohn, he saw a nurse giving her medication, and Krohn whispering something before taking it.  When he asked her what it was that she was saying, she answered that she was saying the blessing before taking medication, the source of which is in the Shulchan Aruch.  Dr. Abittan absorbed the information and shelved it in his mind.  (Rabbi Paysach Krohn wrote about this encounter in his book, “In the Spirit of the Maggid: Inspirational Stories That Touch the Heart and Stir the Spirit”).

On a separate occasion, Dr. Abittan listened to a lecture by Rabbi Dr. Abraham S. Abraham, a world-renown arbiter of medical halakha (Jewish law) and former chief of an ICU at Shaarei Zedek Medical Center in Jerusalem who authored a companion to the Shulchan Aruch called Nishmat Avraham.  Dr. Abraham mentioned this healing prayer, the same one Abittan recalled hearing from his patient of blessed memory, Aidel Krohn.  Dr. Abittan reached out to Dr. Abraham to discuss the prayer and Dr. Abraham told him that although it had somehow gotten lost, that he remained determined to spread the word.  He said he carried a copy of the Mishnah Berurah with the citation in his pocket, since even Jerusalem Rabbis did not know of it and this way, he could be prepared to make a case for it.  Since then, Dr. Abittan has invested a great deal of time, care, and resources toward this campaign which has spread worldwide, in the merit of the neshama of his father Rabbi Asher Abittan zt”l.  Dr. Abraham supported this effort and told him that popularizing this prayer would in fact be a resurrection of the dead.

For Dr. Abraham, the importance of the prayer is as follows:  “One should realize that Hashem alone is responsible for his medical fate, and not the doctor or a particular mode of treatment.  Therefore, one should place his trust in Hashem and pray that he be healed.”  He asserts that the prayer can be recited multiple times a day and can be applied from cases of swallowing a pill, to applying eye drops, to placing a band-aid on the scrape of a young child.  As these remedies are all physical in nature, it is only through Divine blessings that they facilitate healing.

Another contemporary Jewish medical ethicist and current Shaarei Zedek hospital posek Rabbi Dr. Avraham Steinberg has also referred to this healing prayer and written about technicalities as to which therapeutic purposes the prayer is relevant to and in which cases it should be recited with or without mentioning God’s full name.  Other authors, such as Rabbi Yehoshua Neuwirth in his work, “Shmirat Shabbat K’Hilchata” have referred to this healing prayer in regard to the question of whether or not can be recited on Shabbat.

Looking back to the Talmud (Tractate Brachot 60a), our sages mention this prayer as well, almost verbatim with some minor word variation.  There, Rav Acha said, “One who goes to have his blood let says: May it be Your will, Hashem, my God, that this therapy should serve me as a remedy, and that You should heal me, for You are God, the faithful Healer, and it is Your remedy that is genuine – for it is not the place of people to seek medical treatment, but so have they accustomed themselves.”  Abaye took exception to this final point and recalled a Bereita supporting that “authority was given to a physician to offer treatment.”  Alternatives to the closing remarks of the prayer after a medical treatment are “Blessed are You…the free Healer” or “…Who heals the sick,” or “…Who heals the living.”  In Dr. Abittan’s printing of the prayer, he chose to be consistent with the wording of the Mishnah Berurah.

If one pays closer to attention to the words of the prayer, the reference to God as “a free Healer” may appear curious. For some, it can be quite literal, that there is no financial remuneration for God’s healing blessings.  Dr. Abittan suggests that it may refer to God as a healer with no strings attached, meaning He can heal whether a person is worthy or not.  My own interpretation is that only God is free to ensure that only the benefits of a remedy are achieved and not the unintended side effects.  However a person chooses to identify with the words of the prayer, the overall message is one embedded deep in Jewish faith, with recognition of God as the ultimate healer.  It was aptly recommended by major posek  Rav Asher Weiss, to be said in conjunction with the Covid-19 vaccine.

There are countless stories of ways that people who have begun saying this prayer have felt it has transformed their lives.  From taking pain relief or fever-reducing medication, to applying medical ointment, to enduring chemotherapy or radiation therapy, patients of different faiths have shared about how this prayer has become a companion and a great source of comfort.  To articulate a recognition that healing is in the hands of God is a reinforcement of faith that can infuse any medical intervention with blessings.  It can also be a gift to share this prayer with someone else on their own healing journey.  We can each play a role in incorporating this prayer into our lives and passing on the torch to others.  May we each be blessed with good health and blessed opportunities to perpetuate the healing messages of the Torah. 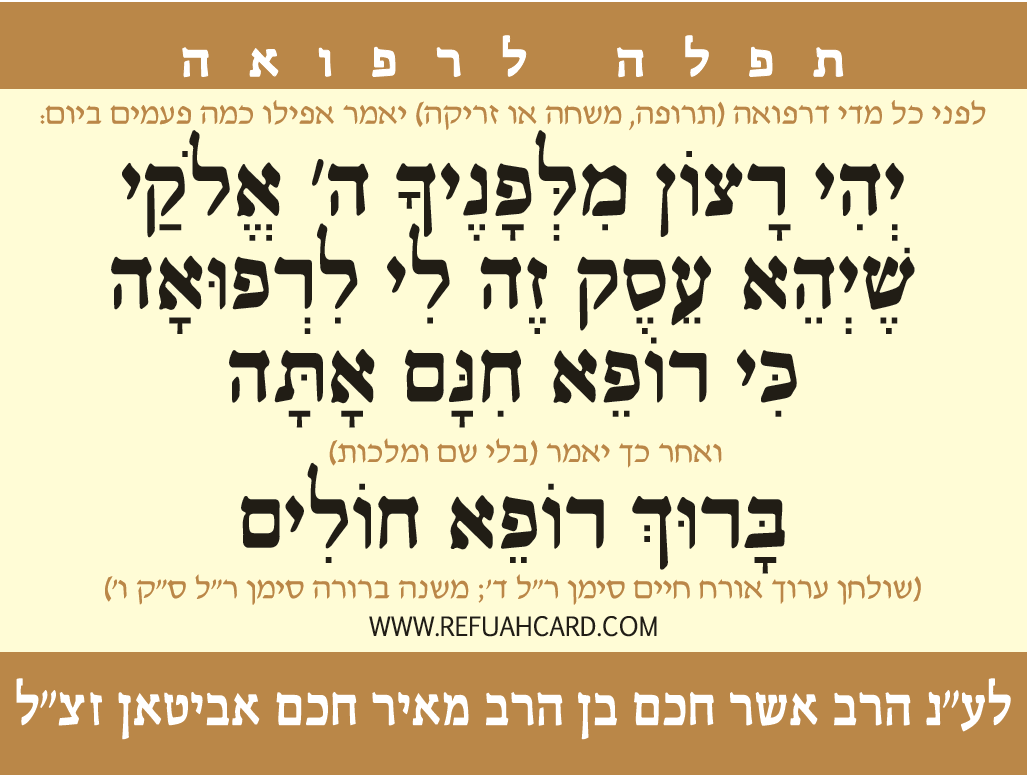 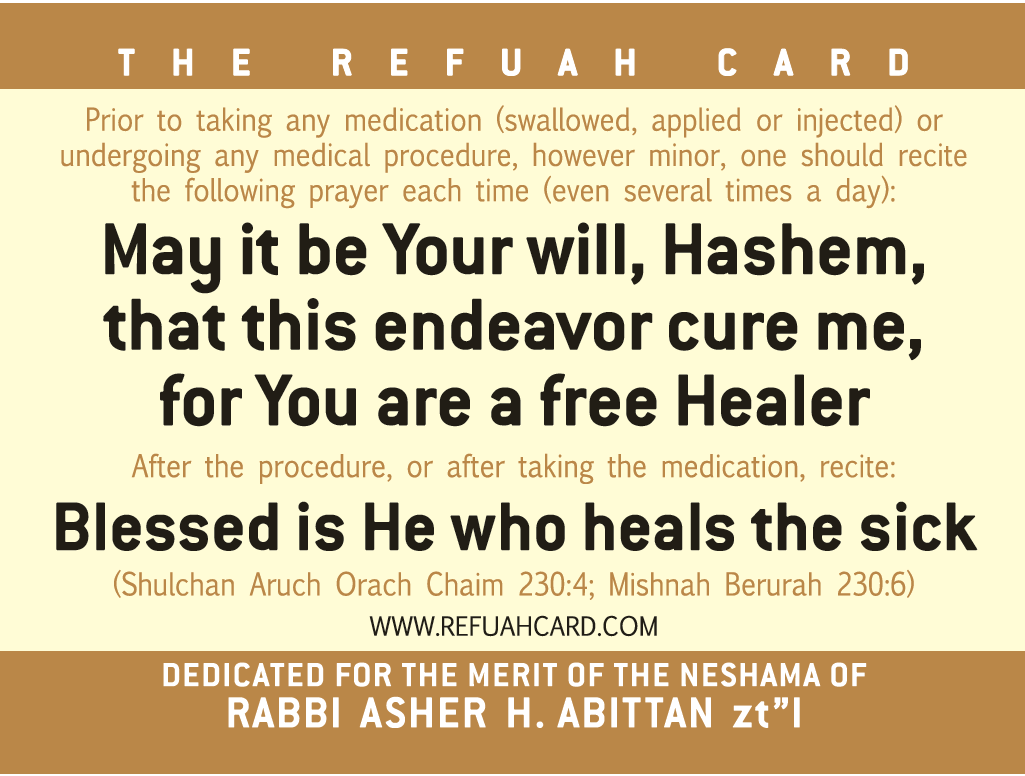 RefuahCard.com
About the Author
Aviva Edelstein is an educational consultant living in Teaneck, NJ. Her academic background in Jewish philosophical healing texts has inspired her current work in mindfulness and education.
Related Topics
Related Posts
Comments