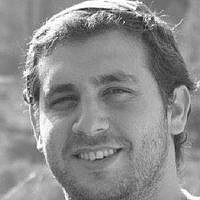 The Blogs
Doni Kandel
Apply for a Blog
Please note that the posts on The Blogs are contributed by third parties. The opinions, facts and any media content in them are presented solely by the authors, and neither The Times of Israel nor its partners assume any responsibility for them. Please contact us in case of abuse. In case of abuse,
Report this post. 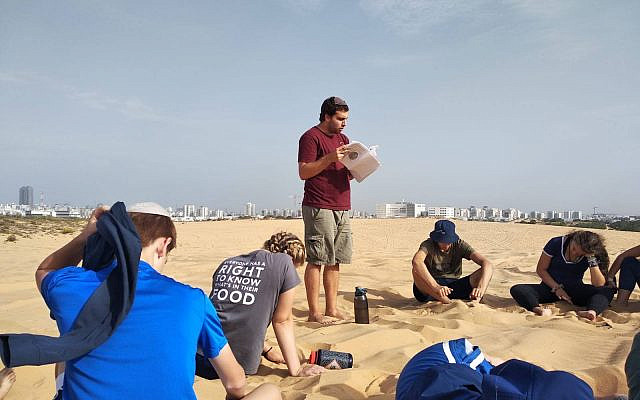 The author teaching a class atop the Ashdod Sand Dunes.

Within hours of the coronavirus (COVID-19) dominating headlines in Israel, everyone knew the medical symptoms and side effects. However, what was far less known was how it would change our routine. We simply had no clue what our day-to-day life would look like.

As a Jewish History and Israel Studies educator at Jewish National Fund-USA’s Alexander Muss High School in Israel (AMHSI-JNF), my days consisted of constant bus travel around the country (and even a few trips out of the country), turning Israel into a living classroom for my students. With the lockdowns perpetuated by COVID-19 in place, it became clear that this way of teaching and travel was not going to be the norm for the foreseeable future.

As the days turned into weeks, and the number of sick in Israel continued to climb, we evaluated the situation and quickly came to realize that we would need to shut down our regular operations. This was no simple task, but it was ultimately carried out swiftly and efficiently thanks to an amazing decision made by our parent organization, Jewish National Fund-USA. JNF-USA released $500,000 from its endowment fund to charter an EL AL 787 Dreamliner to bring our students home.

As our students said l’hitraot (see you soon) to the Holy Land and their new friends, the potent cocktail of euphoria, relief, and exhaustion finally set in. But as any college kid can tell you, cocktails are always fun and games until the morning after.

That next morning was scary. What was our immediate future going to look like? Could we successfully make the transition to online and virtual education?

Thankfully, with the tremendous backing of our administration, AMHSI-JNF educators received the resources needed to shift gears and continue to inspire the next generation of Jews through new mediums. The truth is that in retrospect, this was no surprise. We have a brilliant and seasoned staff at AMHSI-JNF, and with our combined resources and know-how, our pivot was given all the pieces needed to succeed.

Yet, there something else amazing happened. On a personal level, as odd as it may sound, the COVID-19 pandemic reignited my passion for Zionism.

Yes it’s true that I made aliyah (immigration to Israel) at the age of 18, and yes I teach in a school where we inspire students to discover their own relationship with the Jewish State, but that doesn’t mean that I always felt that my connection with the land was as strong as it could be. In some ways, it is a natural progression of my lifepath.

Growing up in Los Angeles, a grandson of Holocaust survivors and child of parents who had instilled a deep love for the State of Israel in me and my sisters, I always had grand dreams of moving to Israel. After spending a year and a half in Israel after high school to study in yeshiva, I decided that I wanted to stay permanently. This was probably the apex of my Zionist zeal.

I made the move to Israel six months later, and for a short while I was living my greatest Zionist fantasy. Eventually what happens to most olim (new immigrants) is that you get hit with what I like to call the BLT: bureaucracy, language, and traffic. That is to say, Israel is a Zionist’s paradise, but it is also a real functioning modern democratic country with all the good that comes with it, as well as the bad. What often happens is that the Zionist passion you once felt peters out as your existence in the land of your forefathers simply becomes your day-to-day experience. It is human nature to be jaded by this over time.

My job did and does afford me a peek back at my old Zionist self; I often see my younger self in many of the excited and passionate students who come through our doors. Yet, it‘s still not the same as having my own profound epiphany.

Then COVID-19 hit and our school was in flux. After getting the hang of Zoom (I think we all remember being there), we decided to look for other ways to get our content out there and one of the ideas we adopted was a series of videos we called “Muss on the Move.” The concept was that each teacher would pick a few historic spots near their house (because traveling was restricted during the lockdown), and film themselves talking about the site for a minute or two.

I began to think of the sites I could go to. My hometown of Mazkeret Batya has an amazing story, so I knew that would be an easy choice. Then I opened up my Google Maps and looked for places within 30 minutes of my home and I was amazed at how many I found. From an ancient city that King Solomon built, to a forest dedicated to Theodor Herzl, to some of the most pivotal battlegrounds of the War of Independence, these were all just quick drives from my doorstep!

We all filmed a few videos and shared them with each other, and I noticed something amazing. Almost all of the teachers filming these videos, without any coordination, ended their clips with a similar line. We always said something to the effect of: “It is really amazing just how much of Israel’s history is right outside your door.” If you could map out the homes of our staff, it would traverse the country, yet this statement was true for each and every one of us. That was an “aha” moment for me.

When I internalized this message, that in addition to this being a state full of Jews, Israel was also a physical storybook of our people, my old Zionist rumblings came roaring back. Every rock, tree, and road tell a story about the Jewish people, our near-impossible survival and our eventual triumphant return to the Promised Land. In turn, this discovery has given me renewed energy to do my part in writing the next chapter of this miraculous story about the Jewish people and their homeland.