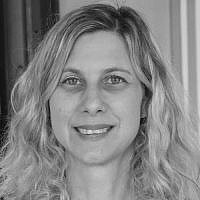 The Blogs
Hilly Moodrick-Even Khen
Apply for a Blog
Advertisement
Please note that the posts on The Blogs are contributed by third parties. The opinions, facts and any media content in them are presented solely by the authors, and neither The Times of Israel nor its partners assume any responsibility for them. Please contact us in case of abuse. In case of abuse,
Report this post.

Can (and should) we talk about other genocides on International Holocaust Remembrance Day?

Today, January 27—the anniversary of the liberation of Auschwitz-Birkenau—the international community commemorates the Holocaust in an annual remembrance day established by the United Nations in 2005. The theme of this year’s International Holocaust Remembrance Day is “Memory, Dignity and Justice.” Commemorative and educational activities will draw attention to the actions Holocaust survivors took in the years following the devastation and brutality of the Holocaust to reclaim their rights, history, cultural heritage and traditions, and dignity. In 2022, 77 years after the liberation day, when the number of Holocaust survivors is sadly though naturally dwindling, a focus on the Holocaust survivors is timely. But does this mean the activities, discussions, and events on this anniversary should not (some would even argue must not) refer to other genocides that took place in modern history?

I answer this question in the negative. Before explaining my stance, however, I’ll present the arguments of my objectors. Surprisingly, I substantiate my counter-arguments on their point of departure.

Those who object to mentioning other genocides on Holocaust Remembrance Day base their position on the claim that the Holocaust is a unique event, incomparable in the magnitude of its abhorrent scheme to any other genocide that has taken place before or after. As such, it can’t be discussed together with other genocides without the risk of being trivialized or minimized.

Although I agree that the Holocaust can’t be compared to any other genocide, I reach completely different conclusions. It is precisely because the Holocaust shocked the consciousness of humanity so deeply that the international community was motivated to integrate the term “genocide” into international law and discourse. It spurred a legal initiative—in the form of the international Convention on the Prevention and Punishment of the Crime of Genocide (the Genocide Convention)—with the aim to fight genocide and eradicate it.

Indeed, the Jewish people’s Holocaust remains the gravest genocide in the history of modern humankind. But its impact on international public consciousness, politics, and international law has not brought about the eradication of this phenomenon. Genocides have continued to take place in the twentieth and twenty-first centuries: such as those of the Maya tribe in Guatemala (1980s), the Tutsis in Rwanda and the Bosnian Muslims in Yugoslavia (1990s), the Yazidis in Iraq (2014), the Rohingya in Myanmar (2017), and recently, the ongoing genocide of the Uyghurs in China.

These genocides are different from the Holocaust in many ways, and each of them is different from the other. But they also have a common important aspect, which sets genocide apart from atrocities such as crimes against humanity, war crimes, or manifestations of racism and antisemitism. Genocides, in the words of the Genocide Convention, are motivated by a special “intent to destroy, in whole or in part, a national, ethnical, racial or religious group, as such.” Thus, not every terrible crime or racist expression or act is genocide—only those with such a specific intent. It is the Jewish people’s Holocaust that triggered this understanding—which means that every time we make this distinction between genocide and other crimes, we remember the Holocaust. Hence, discussing other genocides on International Holocaust Remembrance Day, far from minimizing the Holocaust, underscores its significance.

As the victims of the most terrible genocide, the Jewish people have a special commitment to warn against and prevent such crimes in the future. This commitment is the moral basis for discussing both the Holocaust and other genocides on International Holocaust Remembrance Day. Any activity that challenges hatred, promotes compassion, and aims to evaluate, predict, and prevent genocide is welcome on this important day.

This post was also published on the Ariel University Center for the Research and Study of Genocide website at : https://www.ariel.ac.il/wp/rsg/

About the Author
Dr. Moodrick-Even Khen is a senior lecturer of public international law and chair of Ariel University Center for the Research and Study of Genocide. She is an expert in international law, focusing especially on international humanitarian law (laws of war), international criminal law, and the philosophy of law, especially in the field of the laws of war. Dr. Moodrick-Even Khen published numerous articles and four books.The Syrian War: Between Justice and Political Reality (co-edited with Nir Boms and Sareta Ashraph, Cambridge UP, 2020); Ruth Lapidoth Book (The Hebrew University of Jerusalem, 2020) [Hebrew]; National Identities and the Right to Self -Determination of Peoples: "Civic- Nationalism- Plus" in Israel and Other Multinational States (Brill/Nijhoff, 2016); Terrorism and International Law: Combatants and Civilians in Modern Battlefields (the Hebrew University of Jerusalem, 2010)
Related Topics
Related Posts
Comments