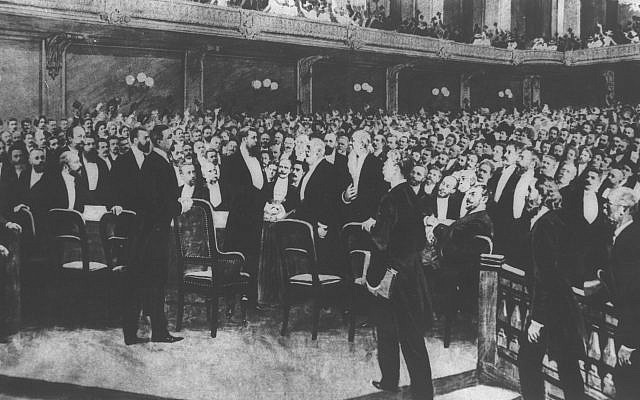 The delegates at the First Zionist Congress, held in Basel, Switzerland in 1897 (Wikipedia)

As we approach the 125th anniversary of the historic First Zionist Congress in Basel, Switzerland, the first international meeting of the Zionist movement, it is a good time to reflect on how that conference affected the lives of the Jewish people ever since.

It is safe to say at the outset that the commitment of the Jewish people to return to their historic homeland that was proclaimed at Basel and resulted 50 years later in the birth of State of Israel was the most significant positive development for the Jewish people in the 20th century, particularly after the horrors of the Shoah. The depths of despair after the murder of six million Jews, two thirds of European Jewry, could never be remedied, but Israel’s independence generated new hope for the future.

And, of course, the growth of the state ever since, its absorbing millions of Jews from around the world, its democracy, technology and culture and its ability to defend itself unlike the centuries of Jewish helplessness in the face of antisemitism, are all part of the miracle that started in Basel.

Not that Basel led to everything that would have been desirable. Most significantly, due to the realities of international politics, the dream of Jewish self-determination was not realized in time to save the Jews of Europe. One can’t help but think how different the history of European Jewry would have been had there been a Jewish state by 1939.

Instead, the British issued their White Paper limiting the number of Jews who could emigrate to Palestine to a minuscule figure.

And Theodor Herzl, the father of the Zionist movement and the organizer of the Basel Conference, was a firm believer that a Jewish home in Palestine would solve the problem of antisemitism. He reasoned that it was the abnormality of Jewish life in the diaspora that played into the hands of antisemites, abnormality in Jewish belonging and not belonging in different societies, and abnormality in professions Jews were forced into that generated the environment that brought out antisemitism. With their own state, Herzl believed, all that would change.

Undoubtedly, the existence of a Jewish state as a haven from Jew hatred with defense forces able to protect its citizens from violence against the state, has dramatically increased the safety of world Jewry. But conceptually, Herzl was off the mark. Antisemitism did not disappear with the existence of the Jewish state. Instead, it showed its tendency to transform itself with the current historical trends, and one of the most significant manifestations of that is antisemitism under the rubric of anti-Zionism, hating Jews in the collective under the guise of criticizing the state of Israel.

The Basel Conference was driven by a combination of concerns about antisemitic violence that had taken hold in Europe, particularly in the Russian Empire for the last decade and more, together with the flourishing of nationalism in Europe during previous decades resulting in the unification of Italy in 1866 and of Germany in 1870. It now seemed possible to translate the two millennia dream of the dispersed Jewish people, as reflected every day in their prayers— the return to their historic home in the land of Israel—into a reality in the modern world. And so began the movements in Basel which experienced tremendous challenges early on as the Ottoman Empire, which controlled the holy land, refused to budge on the Zionist aspiration. So much so, that some of the Zionists, several years after Basel, anxious over continued violence against Jews in Europe, started looking for an alternative homeland that could be achieved sooner.

This approach, however understandable, was doomed to failure because it lacked the authenticity of Zionism. As we see today, there is a resurgence of efforts to delegitimize the Jewish state and to disassociate the Jewish people from the land. It is appropriate to recognize that only a return to the land of Israel, the hope that sustained the Jewish people through the worst of times, could generate the support of Jews around the world for so many years exactly because Jews grew up culturally and religiously thinking, and maybe only in messianic terms, about a return to Zion.

So let us celebrate Basel 125 years later for transforming Jewish life, for providing a haven against antisemitism which still persists, and for bringing the Jewish people back into the family of nations as an equal partner on the world stage. A miracle indeed.