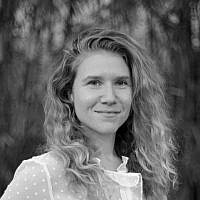 The Blogs
Juliana Gildener-Leapman
Apply for a Blog
Advertisement
Please note that the posts on The Blogs are contributed by third parties. The opinions, facts and any media content in them are presented solely by the authors, and neither The Times of Israel nor its partners assume any responsibility for them. Please contact us in case of abuse. In case of abuse,
Report this post. 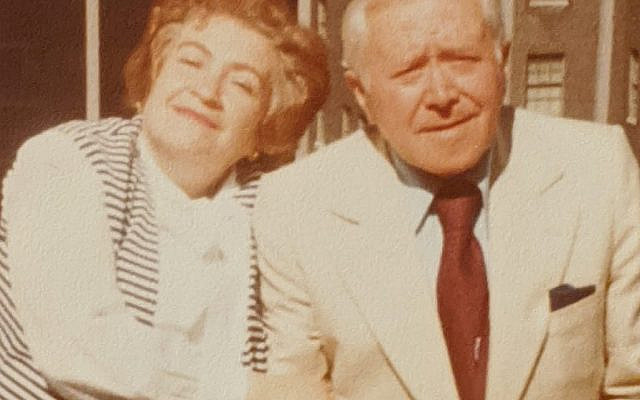 My beloved grandparents in New York City circa 1976
My grandparents were Holocaust survivors from Poland, what is current day Ukraine. Each the sole survivor of their families, they somehow forged a new existence out of the ashes of their lives and built a family in America. They also made Aliyah to Israel, understanding that there was only one path to guarantee “Never Again.”
My grandfather died before I was born, and I only ever knew my grandmother, my mother’s mother, who was an instrumental part in raising us. She was a true matriarch of the family.
My brothers and I were raised with a clear ethic to help others in need. In our family, medicine was the consummate profession emblematic of that cause, and somehow that path was undertaken by each of us in turn in an almost unspoken fulfillment of that creed.
When my oldest brother was embarking on his career in medicine, our grandmother, may she Rest In Peace, entreated him: Neil, if you ever have a German patient, be sure to be extra kind to him, lest you be otherwise.
This leads to the other value system in our family – the value of focusing on life and the future, and not in grudges and resentment. With all the horror stories I was raised with, I never heard my grandmother speak of revenge. When I really think about it, she didn’t even speak with anger in her tone. Despite the profound losses she incurred in a sadistically designed world, she had the ability to say “if I was a non-jewish German girl, I, too, would have been in the nazi youth.” Without ever forgetting the atrocities of her past, she was somehow able to understand and accept that most people are a product of their circumstances. Only an exceptional few are able to break away from the mold and go another way.
She was saved at the hands of two of the rare few “Righteous Among the Nations” who risked their own lives to hide her for 18 months during the war.
My grandparents were from a town called Boryslav, 90 km from Lviv. My family WhatsApp has been very active over the past couple of days processing the events happening today, disturbed by the idea of another war occurring where our war-torn past still occupies our memories. Strange feelings of empathy emerge for Ukraine and the Ukrainian people, when we can still hear our grandmother’s voice telling us “the Ukrainians were the biggest murderers.” Strange feelings of hostility toward Russia emerge when we hear our grandmother’s voice telling us how she “ran down the hill and kissed the first Russian soldier when they came to liberate us.”
Like the glass we step on under the wedding chuppah to remind us that we are living in a broken world without a temple, no moment can ever be too perfect, and my grandmother injured her knee in that dash and remained with a limp the rest of her life. But that hardship was also a constant testimony to the Russian liberation of our people.
I do not know from where my grandparents found their strength or moral compass in such a dark world. But I am grateful when I can beckon their ideals to guide me when they are no longer with us. This sad and scary time for Ukraine, which threatens all of us in the post-expansionist Western world, reminds me to be extra kind to those in need. It is not a time for grudges and resentment. It is a time to harness life, look to the future, and to help our brothers and sisters wherever they are in the world.
I think it is becoming nearly impossible at this point for people to flee the country. Here, in Israel, I remember what the sounds and feelings of rockets exploding overhead felt like only nine months ago. I remember harking back to what my grandparents would do when I reached out to my brothers and sisters in the South facing heavier rocket-fire, offering a somewhat safer haven for them in the center of the country, though we, too, were under fire. And today, I reach out to my brothers and sisters who are fleeing a war of aggression in Ukraine to offer a safe haven if you can get here. There are no shortage of Israelis with family still in Ukraine and if they are able to come here and need a place to stay, I open my doors to them. I know that if others did not do the same for us, I would not be here today.
About the Author
Juliana is a third generation descendent of holocaust survivors from Poland, and what is current-day Ukraine. She grew up listening to her grandmother recount firsthand stories of her experiences during the war. While never shielding her from the harrowing details of her past, she always managed to impart an overarching message of empathy toward others and the will to survive through hope for the future. Juliana grew up in America and made Aliyah to Israel 5 years ago, where she currently practices as an oculoplastic surgeon in Tel Aviv.
Related Topics
Related Posts
Comments