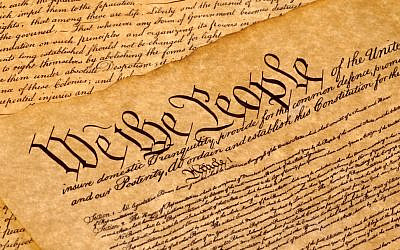 After, January 6th  2021, I had occasion to write an essay reflecting on the events of that day through a Jewish lens.[1] In that commentary, I noted:

The emerging mantra from white supremist and alt right factions pointed to their belief that the “patriotic” actions taken in Washington were designed in part to push back against Jewish domination and influence, while undoing our democracy and its electoral process.

Now, we sit one year later not only reflecting on the on-going implications of the Capitol Insurrection but of the dramatic impact of Trumpism and the growing expressions of anti-democratic behaviors. Polls released earlier this week reveal the potential for increased political violence, with one in four Republicans indicating that violent actions may be justified.[2]

January 6th represents a transformative moment in our history, we understood the meaning and significance of these events on the American psyche, our nation’s politics, and the changing political landscape.

In my recently published volume examining Donald Trump’s impact on American Jews and Israel, the events surrounding January 6th represented just one more element contributing to our understanding of 45’s profound imprint on our society and the Jewish community. In writing about him, I noted:[3]

President Trump must be seen as a cultural phenomenon, with a sweeping influence on reshaping American nationalism and our country’s changing political discourse. Trumpism itself must be understood as having a profound staying power as we monitor its evolution and influence on political messaging.

Anti-Semitism, for so long latent in America, has been recast and along with a general renaissance of hate in this nation, sadly we expect this phenomenon to continue.  Insurgency and political violence have become the new American reality. There is overall a new rawness to American politics, where race, nationalism and anti-Semitism all intersect.[4] The shredding of this nation’s politics can be found on the extremes, both right and left, as the American consensus has all but dissipated.

I raised the following question in a Jewish Journal story that also focused on the insurgency:[5]

But with the assault on the Capitol so at odds with Jewish and democratic values, many might ask: Did our contract with America come to end on January 6? What did this moment mean for Jewish Americans?

Extreme nationalism has always been a threat to Jews, as it seeks to undue basic guarantees, while asserting a new political order that often minimizes the rights of minorities. When others wish to limit our liberties and freedoms, we will need to reclaim these rights, so essential to the democratic fabric of this society.

The American Creed: Beyond our particular political passions and party affiliation, there exists a set of binding principles that define us as “Americans.” The founders of this republic wanted the instruments of government to be understood as a positive force for good within the society, creating a common civic bond.

Law as Culture: In the United States the legal system is responsive to the public’s vision of the society. Even as this nation debates its political priorities, Constitutional principles undergird and sustain the political order and social norms of our republic.

The Idea of Balance: Not only is the Constitution framed around the “separation of powers” but also addresses the distribution of resources and responsibilities between local and national authorities, the individual and the collective, and the competing notions of dissent and consent of the governed. The founders saw these “balances” as a way to limit yet distribute power and as means for ensuring broader civic participation.

Civility as a Value: In an age of political upheaval, the true test of citizenship is the ability to “hear” one’s opponent. Civility is about the act of listening without judging the character of the other, only the merits of their arguments. Societies thrive in a setting where ideas are subject to critical review and thoughtful debate.

Embracing Diversity: The American engagement with multiculturalism gives special credence to welcoming the other. Democracy resonates with the idea of difference. Over its historic journey, this society has evolved from only empowering white men to granting citizenship to all, viewing everyone equal before the law. As we continue to struggle in trying to achieve this equity, our institutions and our citizens are being tested.

On this anniversary, we are called upon to reassert the American story. In my writings I have attempted to identify the elements that frame the historic alignment of our American Jewish journey with this nation’s civic values. These principles address this essential and unique relationship:[6]

Our failure to fully understand the implications of January 6th may well result in our losing this democracy.  In order to begin this reflective process, our civic organizations, universities, and media platforms will need to institute essential conversations focusing on the implications of January 6th.  Our political leaders must likewise continue to unravel the story behind the insurrection, bringing to justice those that are responsible.  Finally, the lessons we garner from this unsettling event must be shared and studied, so that we and future generations fully appreciate the intent of January 6th.