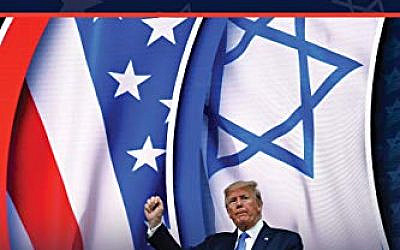 This coming week the 2021 USC Casden Institute’s Annual will be released. This volume examines the impact of Donald Trump’s Presidency on American Jewry and Israel. I was privileged to have been invited to serve as the editor for this publication.[1]

In undertaking this project, I wanted to understand the residual effects of the Trump Presidency. Our 45th President changed our nation’s political culture.  Trump has also had a profound impact on the Jewish community and the State of Israel, just as Trumpism is continuing to be a key political force within this society.

On average, as presidents step away, we are reminded that some 500 books are generally introduced to explain that particular person’s political  impact on the nation and the global scene. In the case of Donald Trump, some 4500 publications have already appeared, each trying to unlock this unique moment in the American political saga.  The USC volume will be only the second Jewish response to the Trump Presidency.[2]

The goal of this collection of essays has been to capture the multiple dimensions of Donald Trump as an individual political actor and to account for his continuing imprint.  President Trump must be seen as a cultural phenomenon, with a sweeping influence on reshaping American nationalism and our country’s changing political discourse. Trumpism itself must be understood as having a profound staying power as we monitor its evolution and influence on the political messaging.

For this publication, I invited 15 writers who in turn prepared 12 chapters, and nearly 300 pages. We included party loyalists along with a variety of specialists, each exploring a different segment of Trump’s special relationship with the Jewish community.  Rob Eshman of The Forward addressed how Trump was covered by the Jewish media. We drew upon two political scientists to analyze Trump’s distinctive connection with the American Orthodox community and the State of Israel. Two young Jewish communal professionals wrote a particularly interesting analysis on how this President was seen Jewish Millennials.  Two historians examined different elements of how Trump, in contrast with other US Presidents, engaged with the Holocaust and anti-Semitism on the one hand, while on the other, how Trump interacted more generally with the Jewish community. Several writers examined how different Jewish audiences responded to this President’s policies and actions.

Dr. Gary Zola of the American Jewish Archives of HUC-JIR points to the culture of synthesis that binds Americanism with Judaism.  In his essay Rabbi Zola identifies four characteristics of “Trumpism” that have undermined the welfare and status of Jews in this nation, the promotion of anti-Semitism, faith in the durability of America’s democratic institutions, the undermining of truth, and the rise of a distinctive parochialism that seeks to dismiss Jewish universalism. Zola provides a contrast on how the Trump Presidency compared with other former presidents in relating to the Jewish community.

The arrival of Donald Trump on the political stage, according to AJU Holocaust historian Michael Berenbaum “has made it so much easier to explain the rise of Nazism.”  Berenbaum embraces T George Packer’s views as laid out in The Atlantic: “ America under Trump became less free, less equal, more divided, more alone, deeper in debt, swampier, dirtier, meaner, sicker, and deader. It has also become more delusional.”

“Both the good and the bad of the Trump presidency arose out of Donald Trump’s “outsider” status and mentality. He broke through conventional wisdom and changed long-standing policies, often to tremendously positive effect. Unfortunately, the political polarization in the Jewish community, exacerbated during Donald Trump’s term in office, is an impediment to rendering a just verdict on his presidency today.”

“Israel comes first, but not for everyone” as political analyst Dan Schnur walks us through the Jewish divide around Trump, and how Israel played a defining feature among his supporters inside the Jewish community. By contrast, Schnur noted: The president’s attempt to create an equivalency between “both sides” of the Charlottesville riot early in his term was widely denounced by Jewish leaders, and many Jews also blamed Trump for encouraging nationalist and nativist behavior among hard-right activists that they felt often veered into anti-Semitism.

Dr. Saba Soomekh points to the messianic character of Donald Trump, certainly as seen and understood by many Iranian American Jews and other pro-Trump Jewish groups, as she explores how various Jewish audiences responded to the Trump Presidency.

Rob Eshman, National Editor of the Forward, commenting on how the Jewish press covered the 45th President note: “But the press did more than just report. It played a crucial role in helping Jews adjust to what for many was a confusing and shocking sight. Shocking, because so many of the policies these Jews and their boss stood for were anathema to the largely Democratic American Jewish community and scores of their Republican Jews as well.”

Two young writers, Adam Basciano and Shanie Reichman,  point to the rise of a state of political anomie, as younger Jews who were not otherwise wedded to the President or overtly opposed him, found little room within the Jewish establishment for a constructive and essential debate on how Millennials and Gen Z’s should manage this condition. Their work with the Israel Policy Forum formed the basis of this fascinating and insightful essay.

Offering a positive assessment of the Trump Presidency, Mort Klein and Liz Berney of the ZOA noted: “Trump’s affinity for the Jewish people and Israel was deep-rooted.”  They conclude their essay with the following observation: “We believe that history will ultimately recognize Donald Trump as one of the greatest presidents ever for the Jewish people, Israel and America.”

“Trump embraced a policy agenda that was anathema to American Jews. On immigration, guns, choice, healthcare, civil rights, the environment, and a host of other issues, Trump’s views were diametrically opposed to those of most American Jews.”

Finally, Dr. Gilbert Kahn introduces one of the most comprehensive analysis of why Orthodox Jews are actively supporting the Republican Party, and more specifically Donald Trump.  Professor Kahn points to a number of contributing factors, among them: “Orthodox Jewish attachment to Israel has become an overwhelming, driving force in how they vote.”

Trumpism remains a dominant cultural artifact and social phenomenon, as it continues to change the political landscape, adding a layer of disruption and anguish.[3]

Anti-Semitism, for so long latent in America, has been recast and along with a general acceptance of hate in this nation, we can expect this phenomenon to continue and sadly to expand.  Insurgency and political violence have become the new American reality.  There is a new rawness to American politics, where race, nationalism and anti-Semitism all intersect.[4]

For both his supporters and his opponents, the Trump Presidency would activate the level and intensity of political activism, campaign financial giving,[5] and voter engagement.

We would witness the emergence of American Jewish Nationalism[6]. Trump’s “Make America Great Again” aligned with Jewish identity politics. Just as the 45th President reframed American patriotism, many of his Jewish supporters brought with them their deep Zionist/Israel connections as a parallel value. The blending of their own Jewish ethnic orientation and their self-interest politics with Trump nationalism established this political alliance.  The Trump phenomenon would affirm the assimilated character of American Jewry, as Jews who supported the 45th President embraced his messaging, just as those Jews who opposed him reasserted their Jewish liberal passions. The Trump era would confirm the depth of Jewish affinity for this democracy, while emulating this nation’s deep cultural and political fissures.

Uncomfortable with the alt-Right and its influence over Republican Party politics and alarmed by the Progressive wing of the Democratic Party, we identified the rise of new class of independent Jewish voters in search of a political home and the creation of a new and difficult conversation over the American Jewish political future.[7]

The book introduces the concern for what we might call the need for essential conversations in three arenas: Diaspora-Israel Relations; the religious divide among Jewish denominational groupings; and most certainly, the deep political impasse that divides Jews.[8]   The Jewish community, like much of American society, has reacted to the Trump phenomenon by refusing to address the issues that today separate our community and this nation.  Rabbis, community organizers and institutional leaders have all declared that it is politically not feasible to hold discussions around our partisan politics or the crisis in Diaspora-Israel relations. As a community, we seem paralyzed to enter into these murky waters, preferring instead to simply accept political division and religious rejectionism. Sadly, this same behavior marks the American landscape as a whole.

The Trump era has stirred the American political stage, creating in its wake a new level of uncertainty in connection with this democracy.[9]