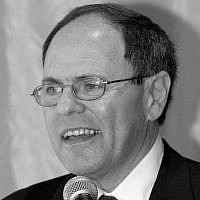 The Blogs
Dani Dayan
Apply for a Blog
Advertisement
Please note that the posts on The Blogs are contributed by third parties. The opinions, facts and any media content in them are presented solely by the authors, and neither The Times of Israel nor its partners assume any responsibility for them. Please contact us in case of abuse. In case of abuse,
Report this post.

US Secretary of State John Kerry has probably never heard the name Adam Ibrahim Juma. Nevertheless, since he took office he has made six trips to the Middle East to ensure, among other things, that Mr. Juma gains his freedom.

I would guess that Mr. Kerry has also not heard the name Ephraim Weiss. After all, Ephraim did not achieve much in his life. As a matter of fact, Adam Ibrahim Juma put an end to his life when he was just nine-months old.

On the evening of October 30, 1988 Rachel Weiss, age 26, took a bus from Tiberias in northern Israel to Jerusalem, with her three young children: Natanel (3), Raphael (2) and Ephraim (9 months). Returning from a family event, they all sat on the last row of the bus. When the bus was near Jericho, Adam Ibrahim Juma and his accomplice Salem Abu-Harbish hurled three Molotov cocktails at the bus, which smashed through the vehicle’s windows and engulfed it in flames.

The driver quickly opened the doors and freed all the passengers, that is, all but four – Rachel, Natanel (3), Raphael (2) and Ephraim (9 months). A brave teenager, David Delarosa (19) jumped into the burning inferno to rescue the young Weiss family, four total strangers. He was unable to reach them. The four young souls were burned alive. Delarosa himself suffered from lethal burns from his heroic rescue attempt. Worst than that: his lungs were badly damaged by heavy smoke inhalation. An urgent transplant was the only hope to save his life. He was flown to London in critical condition but his body succumbed to his wounds before he made it to the operating table.

Adam Ibrahim Juma and Salem Abu-Harbish were sentenced to life in prison, after a meticulous judicial process. They are now in their mid-forties. In the coming weeks they and dozens of other convicted terrorists with blood on their hands, will be freed because the United States of America caved into the Palestinians demands to do so as a prerequisite to renewed negotiations with Israel. At John Kerry’s insistence, the Israeli cabinet will reluctantly vote in favor of their release and Shimon Peres will give them a Presidential pardon.

They will be met with a heroes welcome by cheering crowds in Ramallah and even Mahmoud Abbas, the President of the Palestinian National Authority. Abbas will then make an inflammatory speech in Arabic, taking credit for their release without a mention of John Kerry who really deserves the credit. Abbas will then formally receive them in his office with a grand ceremony in which he will award their acts of murder with medals. This after all has been the standard procedure with all other prisoner releases.

Abbas does not surprise or disappoint me: I have no moral expectations from him whatsoever. But John Kerry definitely does.

We are constantly told that: “One man’s terrorist is another’s freedom fighter”. It may have become a moral relativist mantra, but that doesn’t make it true. On the contrary, it is a fallacy designed to whitewash atrocities. A terrorist is a terrorist, is a terrorist. Mohammed Atta, Dzhokhar Tsarnaev and Adam Ibrahim Juma are terrorists by anyone’s standards, irrespective of their ethnicity, religion or politics. If indeed there are those that consider them “freedom fighters” – then they are themselves criminal minds.

The very notion of Palestinian preconditions before even reaching the negotiating table, to enter a process in which they would be the potential beneficiaries – is utterly absurd. But when it involves the release of some of the most vicious terrorists of our time, it becomes obscene. And that obscenity has been made possible by none other then the US Secretary of State.

About the Author
Dani Dayan is the consul general of Israel in New York.
Related Topics
Related Posts
Comments