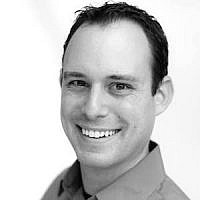 The Blogs
Jeremy Gimbel
Apply for a Blog
Please note that the posts on The Blogs are contributed by third parties. The opinions, facts and any media content in them are presented solely by the authors, and neither The Times of Israel nor its partners assume any responsibility for them. Please contact us in case of abuse. In case of abuse,
Report this post.

In late December 2014, the “happiest place on earth” became ground-zero for an outbreak of measles, a highly contagious respiratory illness which was declared eliminated in the U.S. in 2000. All told, the CDC reported approximately 200 cases of measles stemming from Disneyland.

Day schools — like all other pre-schools, primary, and secondary schools – have publicly available data on immunization rates. We were shocked that vaccination rates are so low in many Jewish day schools. A quick survey of the day schools in Los Angeles, for example, reveals that many kids who cannot medically get vaccinations cannot rely on herd immunity for protection. 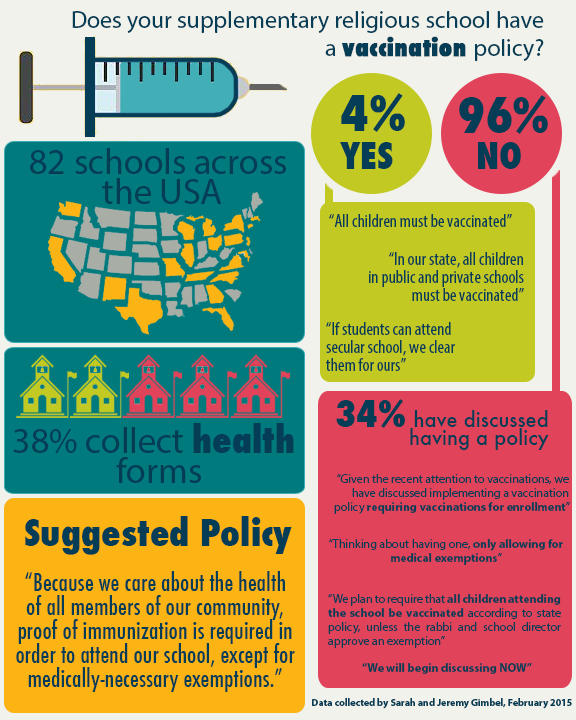 Our Data – A Survey of Religious Schools Vaccination Policies


After posting in a variety of social media venues, we received 82 responses, mostly representing Reform and Conservative schools, from 20 states. Based on the schools’ demographic alignment with Avi Chai Foundation’s Census of Jewish Supplementary Schools, these data should be representative of national trends.

Only 4 percent of supplementary religious schools surveyed have a vaccination policy. About one-third of schools have begun a conversation about having a vaccination policy. The responses indicate that recent events have moved these conversations along, and we assume that if we did a follow-up survey in a year, these numbers would be considerably higher. Some administrators lean on the state law for full-time schools’ vaccination policies. One director noted, “In our state, all students at public and private schools must be vaccinated. We state that all students must have their updated health records on file at their secular school.” This is not the case for most states. Supplementary schools in all but two states need to have a policy to close the holes left by state law.

For the schools that have started a conversation about vaccination policies, most started the conversation because of outbreaks like the one at Disneyland. When asked to describe the conversations, most schools are pushing for policies that only allow for medical exemptions. One Rabbi decided not to even have a conversation: “Vaccination is required. Period.”

The Science is Clear – The MMR Vaccine is Safe and Effective

The focus of our research is on the vaccine for measles, mumps, and rubella (MMR). Measles is a highly contagious virus that is spread through coughing and sneezing, close personal contact, or direct contact with an infected person. The measles virus can remain active and contagious in the air or on infected surfaces for up to 2 hours, and can be transmitted by an infected person 4 days prior to the onset of symptoms. The measles virus is so contagious that if one person has it, 90% of people close to that person who are not immune will also become infected.

The MMR vaccine is so effective that as of the year 2000, measles was considered eliminated in the United States. However, because of the increased prevalence of the anti-vaccination movement, more children are not being vaccinated and this once-eliminated disease has returned. So far in 2015, there have been 159 cases of measles from 18 states and the District of Columbia (as of April 10, 2015), following a record 644 cases of measles in 2014.

Vaccines are for Everyone’s Protection

The Jewish Imperative is Clear and Institutions are Establishing Policies

There are a number of articles online and in print from the last year alone that discuss the Jewish imperative to vaccinate. The Reform and Conservative Movements, in 1999 and 2005 respectively, published responsa that argue in favor of vaccination, providing exemptions only for medical reasons. (CCAR 1, http://ccarnet.org/responsa/rr21-no-5759-10/, Rabbinic Assembly) Many Orthodox authorities follow the same guidelines: the safety of the community is paramount and, therefore, kids should receive vaccines. Roger Price wrote a piece for the Jewish Journal in July 2014, which details the cross-denominational arguments for vaccination. He concludes: “Vaccinations are not contrary to Torah principles. Indeed, vaccinations are mandated because Jewish tradition places the highest value on preventing foreseeable damage to individuals and the community.”

What Can Be Done?

*Parents: Talk to your school about vaccines. Be proactive about starting a conversation, but be careful about the language used in this discussion. Even though the research is clear, we should be sensitive not to demonize other families in our communities. This is about the health of our families, not setting up an “us vs. them” dichotomy.

*School Administrators: Help your school establish a vaccine policy. Here is our suggestion: “Because we care about the health of all members of our community, proof of immunization is required in order to attend our school, except for medically-necessary exemptions.”

We would hope the number of schools with vaccine policies will climb as awareness grows. It is up to each of us to make this change happen. The science is clear. The Jewish imperative is clear. Together, let’s protect ourselves and those in our community who need it most.

This piece was co-written by Jeremy Gimbel & Sarah Gimbel, PhD, a post-doctoral fellow at the Brain and Creativity Institute at University of Southern California.