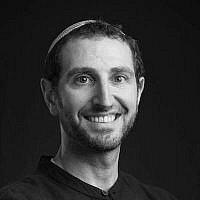 The Blogs
Daniel Raphael Silverstein
Rabbi, educator, meditation teacher and MC/poet.
Apply for a Blog
Advertisement
Please note that the posts on The Blogs are contributed by third parties. The opinions, facts and any media content in them are presented solely by the authors, and neither The Times of Israel nor its partners assume any responsibility for them. Please contact us in case of abuse. In case of abuse,
Report this post.

I grew up in Bnei Akiva, the world’s largest Religious Zionist youth movement. For more than a decade, I participated and led hundreds of programs and camps for the movement, which I loved, and still love, dearly.

A highly respected and influential disciple of Rabbi Abraham Isaac Kook, Rabbi Moshe-Zvi Neria, was one of the key founders and shapers of Bnei Akiva. Rav Kook was the first Ashkenazi Chief Rabbi of Israel and a towering figure in the history of Jewish law and thought, as well as a profound poet and mystic.

Today’s ‘Religious Zionism’ party is a tragic distortion of the teachings of Judaism, and Rav Kook in particular. Some of Rav Kook’s teachings contradict the messages of Smotrich, Ben Gvir and their companions so strikingly (see below) that one might wonder how this distortion could possibly have come to pass. But of course, it is possible to distort by omission or even by emphasis, so it is possible for extremist Religious Zionist torch-bearers to find apparent support for their views in some of Rav Kook’s teachings, and ignore those which promote a different stance.

Similarly, looking back across the entire canon of Jewish thought, it is not difficult to find teachings which espouse the idea that Jews are inherently superior to non-Jews, or which only respect the opinions of those Jews who adhere to the most conservative interpretations of our scriptures and laws.

In other words, parochialism and intolerance have always been a part of the Jewish conversation. But to focus only on these parts of our vast and diverse tradition is to willfully ignore the context which is so central to their meaning. This context includes many core passages in the Torah, starting with G!d’s decision to create humanity (all of humanity) in the Divine image or to choose Abraham to be a blessing to all the nations of the world. There are far too many such teachings to list them all in this article. (Many can be found here, here and here.)

Scholars have pointed out that across many of the world’s societies and religions, parochialism and chauvinism have been steadily rising in numbers and influence since the 1970s. Certain events like 9/11 and the Trump’s election in 2016 can be viewed as watershed moments in this process, which emboldened forces of divisiveness and fanaticism around the world. One way of understanding these events is that fear has been playing an increasingly influential role in our decision-making process, as opposed to hope or love.

Seen in this light, the self-appointed bastions of ‘Religious Zionism’, who revel in Jewish supremacism, are in fact ironically aping the gentiles of the world, and reshaping Judaism in the image of fundamentalists of other faiths. By letting themselves be guided primarily by their fears, they are, perhaps unknowing, playing the part written for them in a global drama of bigotry and extremism. In doing so, they are tragically choosing to ignore the countless voices of hope and love that resound from the words of the Tanach and our entire resultant tradition.

Perhaps Smotrich’s most dangerous opinion is that Jewish Law (Halachah) should be the actual law of our country. His position, which unfortunately is shared by many ‘Religious Zionists’, is a very real threat to the central pillar of Zionism – the actual existence of Israel. It is simply impossible to imagine the country’s secular inhabitants happily accepting the imposition of theocracy.

Moreover, Smotrich’s view rests upon a misleadingly narrow interpretation of the Halachah itself, which in fact allows for a diverse range of possible relationships between Halachah and a sovereign Jewish state. For example, the major 14th century scholar Rabbeinu Nissim of Gerona (known as the Ra”n) espoused a form of legal pluralism, which was used in 1948 by Rabbi Shlomo Gorontchik (later Chief Rabbi Shlomo Goren) to argue the need for a separation between Halachic and secular legal systems.

It has been demonstrated by scholars that the position espoused by Smotrich on this issue was influenced by Chief Rabbi Isaac Herzog’s attempt to emulate European powers and their strongly centralized legal systems. In short, in their aspiration for Halachah to become the law of the land, the ‘Religious Zionists’ are once again imitating the very Gentiles they claim to view with such contempt.

However, Rabbi Herzog took his responsibilities as a leader to the entire Jewish People seriously, and so despite his commitment to one, strongly centralized legal system, he worked hard to build compromise and acceptance between different groups. He understood that this was a central and authentic Jewish value, as well as being a vital necessity for the health of the people and the state.

In contrast, Smotrich, Ben Gvir and their colleagues display a profound lack of the healthy respect for others that is so essential to the Zionist project, constrained as they are by their tragically distorted version of Jewish fundamentalism. In sum, they are very poor representatives of both Judaism and Zionism.

I will let Rav Kook have the last word, and let you decide for yourself if ‘Religious Zionism’ are indeed the faithful heirs to his legacy.

In Middot HaRa’ayah (The Human Qualities of Rav Kook), he explored eighteen qualities necessary for the development of proper character and spiritual fulfillment. It was written by Rav Kook, and edited by his son, R’ Tzvi Yehudah Kook (1891 – 1982). It was published as part of a volume called Mussar Avicha (A Father’s Instruction) in 1971.

Love for all must fill our heart.

The love of all beings precedes everything else. Afterwards comes the love of all humanity. After that comes the love of the people of Israel, which includes everything, for it is the people of Israel who will one day rectify all creation. All these types of love express themselves in activity: Loving others is to do good for them and to cause them to be elevated. And higher than all these is the love of G-d. This is love complete in itself, which does not lead to any further end. When the heart is filled with it, this is in itself the greatest possible happiness.

It requires great care to broaden our love for all creatures to the proper extent. This is in opposition to the superficial impression, borne from inadequate understanding of Torah and conventional morality, which suggests contradictions, or at least indifference, to this love, which must constantly pervade every part of our being. The highest level of loving all creatures is the love for people, which must extend to the entirety of humanity, regardless of all differences of opinion and religion, or those of race and climate.

It is essential to fully explore the mentalities of every people and group as much as possible, to learn about their characteristics and qualities, in order to know how to base our human love on foundations that will readily translate into action.

Only when the soul is enriched by the love of all creatures and all humanity can the love of one’s own nation be elevated to its lofty station and attain greatness, both in spirit and in practice.

It is a mean eye that causes one to see only ugliness and depravity in everything beyond the bounds of a certain nation, even Israel, the unique nation. This is one of the most awful, debased forms of darkness. It damages the entire enterprise of positive spirituality, whose light is sought by every sensitive spirit.

11. We must discipline ourselves to the love of all creatures, and especially those noble ones – the wise, the heroes, the poets, the artists and leaders in commerce. We must recognize the light of [Divine] goodness in the best of people, because through them, the light of G!d spreads through the world, whether or not they recognize the value of their mission.

For another key teaching of Rav Kook on the urgent need for intra-Jewish pluralism, please see here.

And for a beautiful poetic teaching from Rav Kook on how to reconcile individualism with concern for others, please see here.

About the Author
Daniel Raphael Silverstein is a rabbi, educator, meditation teacher and MC/poet. He lives in Israel with his family, where he directs Applied Jewish Spirituality, an online portal which makes the transformative spiritual wisdom of our tradition accessible to all who seek it. https://www.appliedjewishspirituality.org/
Related Topics
Related Posts