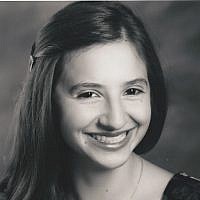 The Blogs
Marina Cemaj
Apply for a Blog
Please note that the posts on The Blogs are contributed by third parties. The opinions, facts and any media content in them are presented solely by the authors, and neither The Times of Israel nor its partners assume any responsibility for them. Please contact us in case of abuse. In case of abuse,
Report this post.

“Why are they crying?” I asked.

“Someone from home was shot in a terrorist attack”

“He was from Boston.” I didn’t know anybody from Boston. I texted my mom, a tragic death. It was awful, an eighteen-year-old boy shot.

“He was so loved by the Boston community.”

“Did you know him personally?” I asked my friend in an attempt to comfort him.

“Yes,” he said. That second, I looked down at my phone, I had a Facebook notification. My staff from my summer on USY on Wheels posted on the page for the first time in months. “Ezra Schwartz.”

“It was Ezra Schwartz?!?” I flipped out.

Ezra Schwartz. The name changed everything. He was no longer a tragic notification on my phone. He was not just another cry for justice. Ezra was a person I knew. In that one second, all my memories of Ezra came back to me.

My Facebook blew up, in mid tears I was still refreshing. My news feed talked about the tragedy: he was so young, he was American, he was on a gap year. And it all led to: the injustice has to end. The attacks on the State of Israel have to end. The double standards, the call against the attack on Paris, but the silence in this situation, all of that has to end.

Ezra was coming back from volunteering when he was shot. He was volunteering. He was doing something amazing, like always. He was being amazing. Ezra was kind, and caring, and funny, and just a wonderful person. He was in Israel for the year of a lifetime. He was in Gush Etzion just volunteering. And now he’s gone.

So I’m going to stand up. Because this cannot happen anymore. Because no more innocent lives can be taken from us, and I hate that it took someone we knew to realize that. I hate that it got personal. I hate that after four weeks, I’m still not allowed back to the Old City. I hate that people are still scared. I hate that nobody in the news says anything about it. I hate that this is not the end. I hate that what so many people want is just peace and peace seems so hard.

Remember that Ezra was my friend.

About the Author
Marina Cemaj is currently on Nativ 35, a gap year program in Israel.
Related Topics
Related Posts
Comments