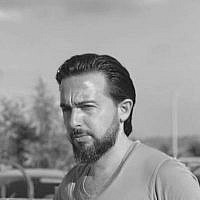 The Blogs
Ilan Pomeranc
Apply for a Blog
Advertisement
Please note that the posts on The Blogs are contributed by third parties. The opinions, facts and any media content in them are presented solely by the authors, and neither The Times of Israel nor its partners assume any responsibility for them. Please contact us in case of abuse. In case of abuse,
Report this post.

First pressed extra virgin olive oil.  That is the traditional foodstuff that is highly anticipated and greatly enjoyed at this time of year from Spain and Portugal in the west across to Italy in the center, onto Greece, Syria, and Israel in the east, and everywhere in between in the Mediterranean Basin.  Traditionally, from roughly October to the end of December depending on the exact region of the Mediterranean, and in some cases further on into the winter months, olives are harvested.  One of the main commonalities amongst the various Mediterranean cultures and ethnicities, and a staple of the area’s beloved cuisines, the olives are pressed for their liquid gold, i.e. olive oil, in parallel to the harvest.  The first pressed olives of the season produce the highest quality and most coveted oil, with its sharp freshness and bold strong flavors. In Israel, the appearance of the first oil of the season also coincides with the festival that is known for being associated with olive oil- pure highest quality olive oil- Hanukkah.

In fact all of the Nation of Israel’s festivals, memorial days and holy days are rooted in national historic events and/or the agricultural cycles and products of the Land of Israel [which themselves were central to the worship of, and thanksgiving to, the G-d of Israel in the Temple in Jerusalem].  There are the three pilgrimage festivals of course, when at the time the Temples stood in Jerusalem, all of Israel went up to the capital to mark and celebrate the occasions and give offerings at the Temple. Passover for example- being one of those three festivals- commemorates G-d’s liberation of the nation from Egypt and it’s exodus from it back to the Land of Israel .  It is also marks the barley harvest in the Land of Israel [barley like the olive being one of the “seven species” which are the fruits and crops which symbolize the Land of Israel and are of it’s highest quality produce], as well as the arrival of the first spring Lambs.  The lambs [a goat could be substituted if necessary as they also arrive around the same time of year] were the sacrifice brought to the Temple for the festival, and whole roasted and eaten as the festive meal by every family in the Land.  Not coincidentally we see this mimicked in other Mediterranean cultures at the same time of year today as Greeks, Southern Italians, Croatians, and others prepare whole roasted spring lamb for the Easter holiday.  The spring lambs also commemorate the event as recorded in the Bible, of the Tribes of Israel making the first Passover sacrifice in Egypt before the Plague of the Firstborn, and marking their doorposts with the animals’ blood so that the Angel of Death would PASSOVER their dwellings.

Pentecost [Shavuot in Hebrew- The Festival of Weeks] and Sukkot [The Feast of the Tabernacles] are the other two pilgrimage festivals and both memorialize historic events as well as the agricultural cycle of Israel.  Shavuot also referred to as the Festival of the Harvest and the Festival of the First Fruits, marks the time at which the G-d of Israel gave Moses the Ten Commandments at Mt. Sinai in the presence of all the Nation of Israel and is also the time of the wheat [another of the “seven species”] harvest, and the picking of the first fruits of the spring/summer season in the Land of Israel.  Sukkot commemorates the traditional desert huts the Nation of Israel used for shelter on their sojourn in the wilderness\desert to their ancestral homeland, and the divine providence present throughout that inauspicious period.  It also marks the end of summer ingathering of the produce of the Land [the festival is also referred to in Hebrew as Khag Ha’Asif another term for harvest or ‘ingathering’].  That end of summer harvest is defined to this day in Israel by pomegranates grapes and dates, which are also part of the “seven species”.  The High Holy Days of Rosh Ha’Shannah and Yom Kippur to have their historic elements as they mark the fiscal and administrative new year in ancient Israel, and the national repentance for the sin of the golden calf respectively.  They are marked a few days prior to Sukkot, and Israel’s seasonal agricultural products again play a role as pomegranates, dates, apples, and honey are integral to the celebration of Rosh Ha’Shanah [the Land of Israel is of course also referred to as the “Land flowing with milk and honey” in the Bible and by the Nation of Israel throughout the ages, and honey is a major agricultural product of the late summer in the Levant].

Returning to Hanukkah, it’s link to olive oil is built in due to the season in which the historic events occurred along with the centrality of the liberation and cleansing of the Temple to those events [olive oil played a major role in the Temple both in offerings and as the fuel for lighting the Menorah].  Roughly two and a half centuries after the festival was established, the Sages and Rabbis inadvertently made the connection between Hanukkah and olive oil even more pronounced and integral.  The story of the miraculous juglet of pure highest quality olive oil found by Maccabean forces in the Temple after the liberation of Jerusalem from the rule of the Seleucids, and which miraculously kept the Menorah lit for eight days though there was only enough oil in it for one day, has its source in the Tractate Shabbat of the exilic corpus known as the Babylonian Talmud.  It does not appear for example in the Book of Maccabees or other major sources on the events of the rebellion against the Seleucid Hellenist Empire.  The Sages and Rabbi’s wanted to give G-d a direct and active role in what was essentially a Second Temple period independence day [moreover Hanukkah is like a combination of Israel’s current Independence Day, and Jerusalem Day which celebrates the liberation of the capital once again almost 2,200 years later]; a clear cut miracle served this purpose.  There is a very specific and contentious agenda and thinking behind why the Rabbis acted in this way, but that is too complex a topic to cover here.

With the destruction of the Second Temple and exiling of the nation at the hands of the Romans, Hanukkah could no longer be marked in and around the structure whose liberation and purification it memorializes.  Customs and traditions such as using olive oil to light a slightly altered Temple Candelabrum known as a Khanukkiah that has eight stems instead of seven [so as not to contravene the prohibition on using exact re-creations of Temple vessels beyond there Biblically mandated purpose or outside there singular designated physical and geographic location- Jerusalem], and the consumption of fried oily foods developed.  The juglet of oil miracle, recorded in the exile, became integral to the celebration of Hanukkah during that exile for a nation bereft of its land, independence, and sacred space.

As the exile grew longer and centuries passed, exilic traditions would be forced to adapt further, and when the Roman Catholic Church established the Inquisition olives and olive oil would become, like other hallmarks of Mediterranean life, less and less accessible to the exiles of Israel. The expansion of the Inquisition to the Kingdoms and territories of Spain and Portugal specifically would result in the mass expulsion of the largest, most affluent, and influential of exilic communities, those of the Iberian peninsula.  Furthermore Spain’s dominance of the western and central Mediterranean, with it’s control over places like Sicily and the Calabria region of what is today Italy, had the edict of expulsion and unrelenting persecution of the Nation of Israel extended deeper into the Mediterranean basin.  After nearly fifteen centuries of the exile being concentrated in the area, it’s center of gravity was forced to shift north and eastwards into central and eastern Europe.  In the Middle East what today is Iraq, Yemen, and Iran where olives were not a staple crop nor widely cultivated, became locations with larger and larger communities of Am Yisrael, while traditional olive growing regions such as Lebanon and Syria maintained substantial but smaller communities [the Nation of Israel of course retained communities in the Land of Israel fluctuating in size throughout the millennia of exile].  This paradigm shift, of an exile whose largest population concentrations were now far from the shores of the Mediterranean and the foodstuffs it offers, forced the Hanukkah customs surrounding olive oil to be diluted, and other more readily available plant based oils took its place.  Festive foods such as fried dough pastries, doughnuts, and potato fritters which neutral flavored oils- unlike olive oil- were perfect for the preparation of  became staples and, confoundingly, symbols of Hanukkah.  Potatoes only arrived from the “new world” in the sixteenth century, Hanukkah had already been celebrated for 1,600 years!

The long and devastating exile of Israel finally ended seventy three years ago. Am Yisrael is free and independent in Eretz Yisrael.  The official seal of the State of Israel is the Menorah with a fruit filled olive branch on either side of it, an image foreseen by Zechariah Prophet of Israel some 2,500 years ago during the period of return to the Land of Israel from the Babylonian Exile.  Today Israel produces international award winning olive oils and it’s olive orchards are as fruitful as they have ever been.  So this Hanukkah next to the chocolate coins and foods fried in other oils, place a bottle of your Israeli extra virgin olive oil of choice (preferably the first pressed of the season) on your table along with some Israeli olives.  Even for those of you in the diaspora it is as easy as unlocking your smartphone and ordering a bottle online directly from Israel, or running out to your local high end food market, many of which carry Israeli products such as wine and olive oil.  Dip a piece of warm flat bread, as is common in the region of the eastern Mediterranean, into the prized liquid and think of the glistening green-silver leaves of a centuries old olive tree standing nobly on a rocky outcrop in the Judean Highlands or the steep incline of a Galilean mountainside.  A few olive trees in the Land of Israel are even older, old enough to have been alive when the Second Temple still stood.  Then light your Khanukkiah and remember the boldness, heroism, and conviction of your ancestors and their leaders, five brothers and their father, who in the spirit of Joshua, Gideon, and David before them would not let an enemy’s size or prowess deter them from liberating the Land and Nation of Israel.  It is this same spirit which is part and parcel of Israel’s warrior ethos today.

About the Author
Ilan is the third generation of a family owned and operated real estate business based in the US and focused on the hotel industry. In addition he is involved in the technology financing sector in Israel. Ilan voluntarily advises and works with Christian Zionist and Israel supporting Noahide groups, as well as with Israel advocacy related causes in general.
Related Topics
Related Posts
Comments