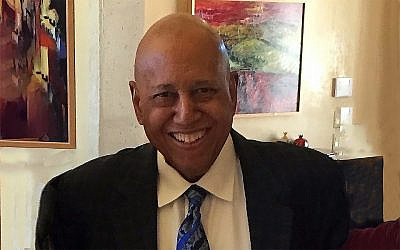 On a clear, warm day in December 2019, Congressman Alcee Hastings stood tall and elegant at one end of our living room. With a breathtaking display of courage and intellect, he shared candid stories about his childhood in Altamonte Springs, Florida, his battle with pancreatic cancer and his support for Jewish causes and Israel. These poignant vignettes revealed a unique man possessing an iron will and who lived a life very well. Mesmerized, the audience of over seventy friends and colleagues listened carefully to our good friend. And when he finished, we gave him a standing ovation showing our deepest respect and heartfelt appreciation.

About seventeen months later, on April 6, 2021, Congressman Hastings passed away. At his memorial in the U.S. Capitol, generous eulogies from his fellow Congresspeople told of the great respect he earned. They recalled his participation in the Congressional Black Caucus, his steadfast support for Israel and for his beloved Florida District 20 that covers parts of Ft. Lauderdale and West Palm Beach. Afterall, he was elected fourteen times and had weathered many challenges in his storied career. With degrees from Fisk, Howard, and Florida A&M universities, he was well equipped to defend those that needed social justice protection including in matters of race, women’s and LGBTQ rights, and the Zionist cause. They remembered how he could use both wit and fury to make his case.

Over the past five years, I have had the great fortune to lead multiple AIPAC lobbying delegations to his office. We would plop down in his chairs and sofas as he sat on the front edge of his desk, dangling long legs, and displaying his famously flashy socks. He would “hold court” listening carefully to our issues of the day “talking points.” He would first answer our questions and then opine on the broader challenges, trends, and opportunities. His expertise on matters regarding the Middle East was impressive and he lectured with such depth and nuance that we felt we earned three college credits in geopolitics.

In 2017, the Congressman led an effort, albeit unsuccessful, to secure Congressional funding for Israel’s Black Jewish Ethiopian community of then nearly 140,000. He deeply appreciated the remarkable and righteous story of Israel’s ingathering rescue of Jews during Operation Moses and Operation Solomon. Congressman Hastings, a member of the House Rules Committee, proposed $12 million be allocated to advance their education by expanding the already successful Ethiopian National Project school initiative. He hoped that these uplifting techniques might at some future time be replicated at American inter-city schools. Proudly, a co-sponsor of the bill was Congressman John Lewis of Georgia, the stellar civil rights activist known for his civil rights leadership and willingness to engage in “good trouble.”

From a Jewish perspective, Democratic Congressman Hastings was a stalwart ally. He stood tall in 2015 voting against President Obama’s JCPOA Iran deal. Ron Klein, a past congressman and chair of the Jewish Democratic Council of American was quoted saying “Rep. Hastings understood Israel’s strategic relationship with the US and was a consistent and strong supporter of the State of Israel. He also empathetically understood the shared experiences of the Jewish community and African-American community and was a leader in tying the two communities together.” Colleagues at his memorial reflected on his personal relationship with Israel’s Prime Minister Bibi Netanyahu. Afterall, he visited Israel fifteen times. When they would meet it was a quick and affectionate exchange of “Bibi!” and “Alcee!”

During these troubling times with rising anti-Semitism, acidic anti-Zionism, political rancor, and pervasive charges of racism, we sorely miss Alcee Hastings’s presence in Congress. He was a civil rights lawyer and activist who knew well the important role that Jews played in the struggle. Alcee Hastings enjoyed Jewish allies when working as a civil rights lawyer. We could rely on his strength to resist revisionist history as well as his forceful leadership in providing insightful counsel to his colleagues and constituents. He would not accept the twisted intersectionality, woke-ism and race theory that ignores American progress and obscures the positive history of Jews and Blacks struggling together for justice. He became a lead spokesman for causes favored by the Jewish community and with his perfect voting record on Israel, he was the pro-Israel community’s most reliable ally in the Congressional Black Caucus and the House of Representatives at large.

His family’s statement referenced “…a life of triumph over adversity and his brilliance and compassion (that was) was felt amongst his constituents, colleagues, the nation and the world.” They were so right. We miss his wise leadership and the joy of a simple exchange with a remarkable human being. It was our honor to spend time with Alcee Hastings.

About the Author
Alan Newman is a life-long supporter of the Jewish community and Israel. His commitment is evident with his hands-on approach and leadership positions at AIPAC, StandWithUs, Ben-Gurion University, Ethiopian National Project and Federation’s JCRC. He has traveled to Israel almost two dozen times and is an enthusiastic supporter of pro-Israel Christians including critical organizations like CUFI, ICEJ, USIEA and Genesis 123 Foundation. Alan’s compelling novel, GOOD HEART, published by Gefen Publishing House, is a multi-generational story about a Christian and Jewish family. He was a senior executive at Citigroup and holds two US Patents. He lives with his wife in West Palm Beach and enjoys time with his two sons and their families.
Related Topics
Related Posts
Comments
Advertisement