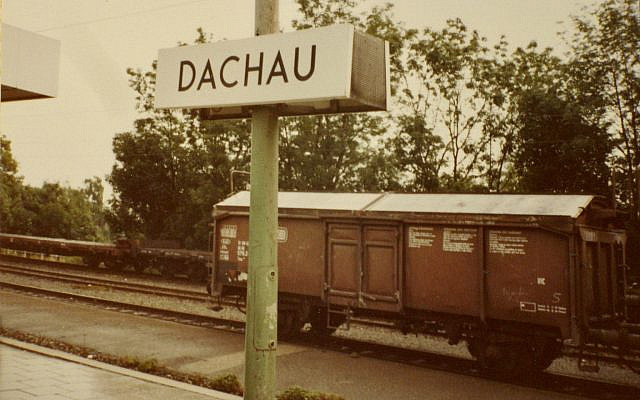 Train station of the town of Dachau (Photo: Steve North)

It’s been 37 years since my visit to Dachau, and I am still haunted by one moment from my three hours in the former concentration camp.  Who was that man?  Did I actually see what I thought I saw?

In 1983, my mother, born Brunhilde Bachenheimer in Marburg, Germany in 1929, was invited by the government of West Germany to return to her hometown, along with two dozen other Jewish former residents.  The stated goal of this and hundreds of similar trips was to show German-born Jews that Deutschland was no longer the murderous country from which they had fled in the 1930s, or from which they’d been deported to death camps.

At that time, many Jews still considered it verboten to buy German-made products, much less to set foot on the blood-soaked soil there.  My grandmother was confused and upset that my mother would even think of going back to the place where they had been so harshly persecuted before escaping to America.

After much anguished discussion, my parents and I decided to accept the invitation, with one caveat: after the ten-day-long group schedule ended, we would pay for the “sin” of being in Germany by separately visiting a concentration camp.

We took a train from Frankfurt to Munich, then boarded another one for the ten-mile ride from Munich to Dachau – not the camp, but the town, complete with a railway station where commuters wait under large signs that read “DACHAU”, as if it were a word like any other. I looked at some cattle cars lining the side of the station, and thought of the irony that now they were being used for their original purpose, to transport animals.

The tracks no longer reach the camp; one must look for a regular city bus that goes to the “Gedenkstätte” (memorial).  We sat up front, and when an elderly man, shaking terribly, slowly climbed onto the bus, my father helped him up and gave him his seat.

The bus stop was several blocks from the site, and as we walked toward it, we were struck by the realization that Dachau, Nazi Germany’s first concentration camp, was located in a town, not hidden in some far-off forest.  The houses nearby were old.  They had been there in 1933, when the barracks, towers and barbed wire went up, just two months after Hitler’s ascent to power. 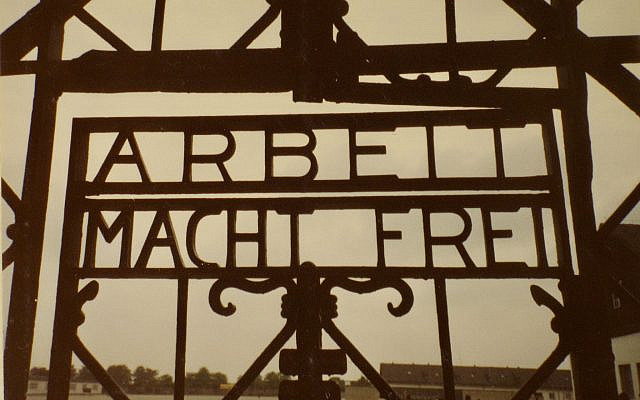 After passing the iron entrance gate with its mocking slogan “Arbeit Macht Frei” (work will set you free), we entered a former factory, now a museum.  There was a half-hour film, and a comprehensive exhibit of photographs and documents.  As we looked at a mural-size picture clearly showing five or six camp guards, close up, I had the strangest feeling that I’d seen one of them somewhere.

Suddenly, a flash of recognition:  the odd, distinctive face of the guard was the same as that of the old man who’d gotten onto the bus just twenty minutes earlier.  My jaw dropped, but I said nothing and dismissed the thought immediately, realizing that my imagination was taking off in leaps and bounds.

At that moment, my mom pointed to the photo, turned to my dad and said “That’s the man you gave your seat to on the bus”.

There is no attempt made in the museum to cover up the atrocities committed in Dachau, but the rest of the camp has, quite literally, been whitewashed.  The barracks were destroyed after the war, and it’s all been sanitized, painted and landscaped.  There is, however, no way to mask the horror of the crematoria, or to describe the cascade of feelings one has standing in front of them.  The smell of corpses has long been gone; the scent of evil still hangs heavy in the air. 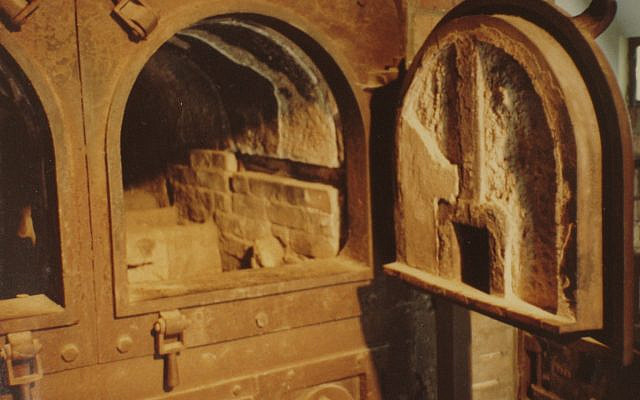 An Auschwitz survivor once told me that in the depths of that hell, he and his fellow inmates would hear horror stories of Dachau, and pray they’d never be sent there.

The executions by firing squad, hanging and torture, the grotesque medical experiments, and the brutal forced labor were unrelenting. Over its dozen years of operation, more than 200,000 prisoners were registered, and about 32,000 were killed. But those official numbers, according to historians, are most probably very low. 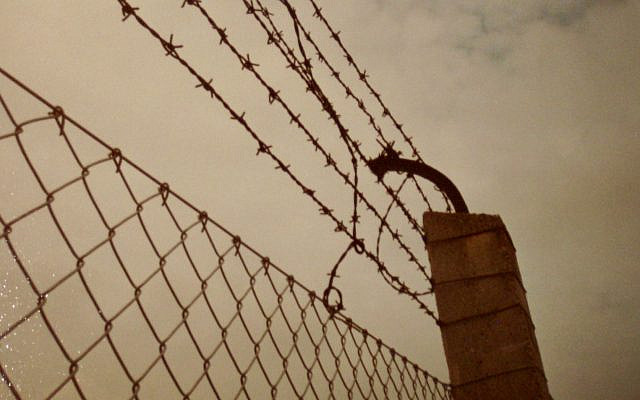 On this 75th anniversary of Dachau’s liberation, I’m thinking of all those who suffered and died in that cursed place. And I’m recalling how my father, whose aunts, uncles and ten first cousins were killed in the Shoah, helped that frail old German up the steps of the bus back in 1983. Was he, indeed, the uniformed guard of four decades earlier, a Nazi war criminal?

We will never know. What I know for sure is that we heeded a basic imperative of our people. Rabbi Abraham Joshua Heschel wrote “Judaism does not command us to believe; it commands us to remember”.  We did that at Dachau; we do it again today.