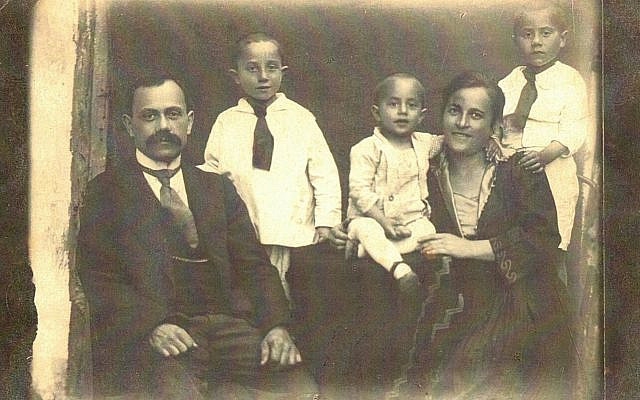 Shaya Teplitsky of Mogilev-Podolsky, his wife, and their sons Yossi, Buzi and Seme, who perished in the Holocaust. (courtesy, photographer unknown)

Researching family histories can bring moments of joy and moments of pain. I’ve blogged about my genealogical journey several times in over the past year or so, as I’ve made discoveries or hit brick walls and tried to bring to life those who’ve come before me.

This weekend, I was able to help a distant relative of my husband’s track down other distant family for whom all he had was his mother’s memory of a young woman visiting in 1980 and two photos taken in the 1970s with two couples whose names he did not know.

And in one fell swoop, it was solved. I tracked down his grandfather’s sister’s descendants and found a current phone number for one — the same one who herself had visited his mother 40 years ago.

And so he called the number.

And she answered. Even remembered his mother. She was able to identify all the mystery relatives and even send him a photo of him in a stroller with his mother and siblings. For two years, these photos and his mother’s glimpses of memories have been haunting him. And now he knows.

I think of the photos that haunt me. But these were taken perhaps a hundred years ago. I see my mother’s uncle whose name I believe was Shaya, his wife, whose name I don’t know, and their three sons, Yossi, Buzi and Seme. There are other photos of the three Teplitsky sons when they are older too. But there are also photos of other children for whom no names are known – boys and girls, a group of four, a group of six…Did any of Shaya’s sons marry and have children? I don’t know. There is a portrait of a man too. Could it have been one of the sons? I simply do not know.

The Yiddish on the back offers scant clues but mostly apologies for not sending more photos.

Shaya and his entire family perished in the Holocaust. I believe they perished where Shaya’s brother David’s wife Rosa and daughter Lubya died, at Pechora, a camp also known as Dead Loop. (This past year, I tracked down David’s descendants and learned about his family, but they are unfamiliar with Shaya.) I do not know for sure where Shaya’s family were killed, only that they were. I can find no records, not of any of their lives, nor of their deaths. The town where they lived, Mogilev-Podolsky has no records online to speak of, although while there are projects for some files which still exist to be digitized, I have no idea of they include my family. And so there is a big void of darkness where memories ought to be found.

I stare at the photos and am haunted in ways that ache.

This year, when we recite Yizkor, the memorial service of remembrance, on Yom Kippur, the prayer for the six million will resonate more than ever, given all I’ve learned during this past year. I will be thinking of Shaya, his smiling wife and their three sons; I will be thinking of his sister-in-law Roza and her daughter Lubya, and I will be thinking of the faces in the photos of relatives whose names I do not know but who haunt me.

May we all remember and be remembered.

About the Author
Born in Brooklyn and raised on Long Island, Wendy lived in Jerusalem for over a decade submerged in Israeli culture; she has been soaked in Southern life in metro Atlanta since returning to the U.S. in 2003. An Ashkenazi mom to three Mizrahi sons and a DIL and a step mom to two sons born in the South, she splits her time between her job at hte Center for Israel Education, wrapping up her last semester pursuing a dual masters in public administration and integrated global communications, immersed in researching family history, relentlessly Facebooking, enjoying the arts and trying to bring a wider perspective to the topics she covers blogging.
Related Topics
Related Posts
Comments