For more than six decades, he was recognized as one of the most important artists in the world but few people know the awe-inspiring role he had played as a young person, together with his sister Aida and his parents Knar and Mischa during the dark days of WWII.

Their story had been revealed by Professor Yair Auron, a world-renowned Israeli scholar specialized in Holocaust and Genocide stories.

The Aznavours were closely linked to the Missak Manouchian Resistance Group, and among other feats, they had the courage of offering shelter at their little Paris apartment to Jews, Armenians and others who were persecuted by the German occupiers and their local henchmen. Moreover, the young Charles was a courier of the Resistance.

When the International Raoul Wallenberg Foundation learned more details, its board decided to pay tribute to the Charles and Aida, and through them, to the deceased parents.

Luckily enough, we were able to recognize the Aznavour family in a moving ceremony which was hosted by President Rivlin, at the Presidential Residence, on October 26, 2017, barely a year before the death of the singer. 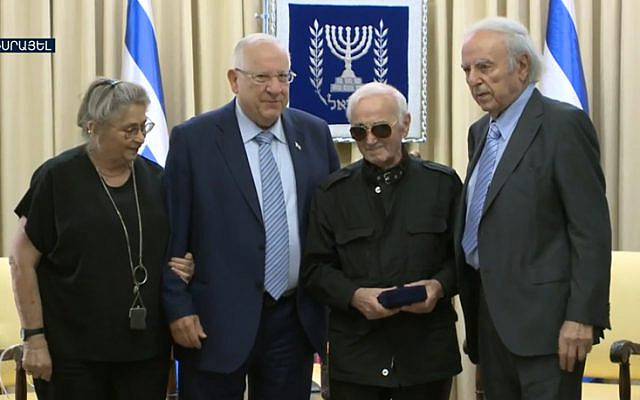 On this occasion, Charles Aznavour, was bestowed the Raoul Wallenberg Medal. He represented his sister, who could not attend the ceremony due to her advance age and his late parents.

In his acceptance speech, Aznavour said he “always felt close to the Jewish people and even knew the Jewish prayers better than the Christian ones. He was deeply honored to receive the accolade in Jerusalem, “one of my favorite cities in the world“, as per his own words.

In a very friendly tone, he raised the issue of the Armenian Genocide, asking his host, President Rivlin, “why Israel refuses to recognize it as such”.

In his speech, President Rivlin confided how he and his wife Nechama (who attended the ceremony and regrettably passed away in 2019) “admire Aznavour and even started their relationship listening to his memorable songs“. President Rivlin congratulated Aznavour on his well-merited recognition and in response to his remarks, he outlined his personal commitment to the Armenian people, highlighting that he has “always denounced the terrible massacre they had suffered”. He added: “Beyond any definition, is clear what happened to the Armenian people and now, as President, he is bounded to speak in one voice with the Government”.

President Rivlin ended his speech by saying: “whoever saves a life saves the world entire” and “the Aznavours saved many lives”.

Once the ceremony was over, I had an unforgettable tete-a-tete chat with Charles Aznavour. I asked him: “What is the secret of your indefatigable energy and youth”? His answer: “Every day, before I go to sleep I take a book and learn something new….this makes me feel alive“. I also asked him: “What made you and your family risk your lives to save others”. He looked back at me, with his eyes wide open in surprise: “What else could have we done“?

This chat showed me both the wisdom and the heart of this singular human being. His glance and his words will stay with me forever.

I was very privileged to have met such giant artist and human being.

I fantasize with having yet another chat with him and listen to his thoughts about the difficult times we are going through. I wonder what he would have to say about the coronavirus, the bloody conflict that has just erupted in his native Armenia and what the future holds for us.

The inmortal words of Nathan Yonathan reverberate in my mind: “Where are there more people like you“?

Monsieur Aznavour: Your art and your humanitarian  legacy will live forever!

About the Author
Baruch was born in 1933 in Las Palmeras, Argentina, a little hamlet which was part of Baron Hirsch's Jewish settlements. He graduated from a Yeshiva and spent his first adult years teaching Judaism. In the 1960's Baruch was Director of the Israeli Tourist Office in Argentina, creating a program for Catholic pilgrims. He has founded two NGO's, Casa Argentina in Israel - Terra Santa and the International Raoul Wallenberg Foundation. He is married, has three children and resides in Gibraltar.
Related Topics
Related Posts
Comments