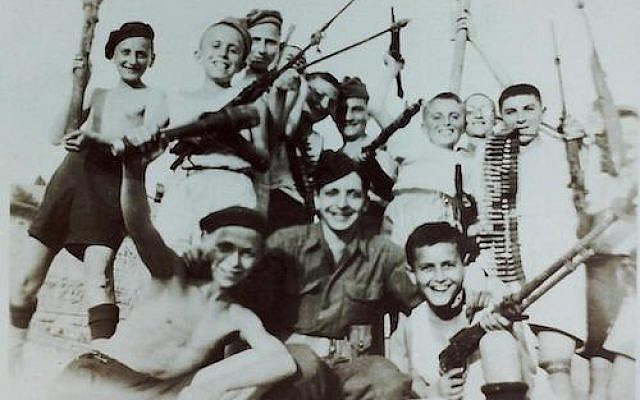 Boys entertaining themselves in the quarry in Buchenwald post liberation. Photo from Monash University web site.

Yom HaShoah is the designated day for remembering the six million men, women and children who were systematically killed during the Holocaust. In our family, we did the usual things on that day to commemorate: my father lit a candle to remember his parents, siblings and close relatives who all perished, and we as his children, collectively attended the Melbourne community public memorial service together with many others. It was almost an unspoken rule that we attend.

But our family’s more intimate and special commemoration was the 11th of April – the day my father chose to mark as his “birthday” as it was the day he was liberated from Buchenwald concentration camp in 1945. For many decades after the Shoah, my father did not talk of his wartime experiences. But in the 1980s, prompted by Claude Lanzmann’s epic movie Shoah, he seemed to have a change of heart. And thus began a new and cherished ritual in our family – the Werdiger liberation dinner.

We were invited to their home for what was an unforgettable night. Three and then four generations sat around the long, beautifully laden table. Younger members of the family were allowed to attend only once they reached bar- or bat-mitzvah age, when my parents felt that they would be ready for the difficult subject matter to be discussed. My mother would prepare a lavish feast, including my father’s favourite childhood foods: breads, a hearty soup, meats. They were the foods that reminded him of his life at home in Sosnoweic, and stood in stark contrast to the lack of food and sustenance in the concentration camp. There were no flowers or extravagant décor – it was not that kind of evening. Rather, it was authentic and genuine. The showpiece was when my father would gather the courage to relate some of his experiences – often details he had never shared before with the family. Following this, other family members would reflect and comment.

After he passed some five years ago, my mother decided she no longer wanted to continue the practice as the subject of the dinner was no longer present. However, my wife and I decided to continue it with our children. As the youngest, I felt that our children would benefit from the history, stories and memories. This year, by chance or otherwise, we had a smaller dinner with just my mother and her immediate children and spouses. As we went around the table discussing the subject, I realised there is a stark difference between remembering the destruction of the Holocaust – both to our family and to the Jewish people – and what our family had been doing for years.

Some years ago, I explained to a friend (whose father was also liberated from Buchenwald) that our dinners were about gratitude and celebration: thanking God for having saved my father, and celebrating the life and family that he and my mother (may she live until 120) had built. To be sure, such a celebration could not really be complete without acknowledging the past. But it was actually about the future.

Despite his wartime experience, my father was a visionary. He was always very forward-looking and was positive about the future. He worked until just weeks before his passing (at the ripe age of 93), and said to me many times: “I don’t need to work; I have everything I could possibly need. I’m building assets for the future”. And he did. With gusto. His perspective was typically ten or more years further into the future than most of his peers. He would be so happy with each new child born into the family (we are blessed to number over 150 kein ayin harah, kein yirbu) seeing that as his ‘revenge’ over the destruction wrought by the Nazi regime. When the first great-grandson bearing his surname was born, he remarked triumphantly: “Hitler killed three generations of our family, but now I have four!”.

For many years as we grew up, he found it too painful to talk of the past. Indeed, his brother (who emigrated to New York) never did. What changed for my father? I believe that as he grew older, he felt an increasing sense of urgency to pass on the message to his family and his community. Each year after our dinner, he would tell us that he experienced nightmares as a result of talking about those times. It brought back so much pain for him, and yet, he persevered and shared.

Framing our dinners as a forward-looking celebration rather than a backward-looking memorial has led me to an additional insight: that he was able to share the painful past by creating a ‘safe space’ surrounded by his many progeny. That provided him the comfort to be able to talk of such horror to us, knowing that despite all, he had prevailed, and indeed had flourished.

He was such a tiny man in stature, but was a giant personality. Five years later his shadow still looms large over our family. Grieving him has been a long and complex process for us both as individuals and a family. At times we seem glued to the past rather than moving our lives forward without him. But just like he chose to remember the Holocaust in a forward-looking context, we can apply this to the way we have dealt with his loss.

He experienced the worst of humanity, yet crafted an entirely new future for himself and the family he and my mother built together over 63 years of their marriage together. The appropriate way to honour him as the ultimate optimist would surely be that as his children, we look to the future that he helped enable for us, and build on that foundation to create the future of our family beyond him. If we could achieve that, it would be the ultimate legacy.