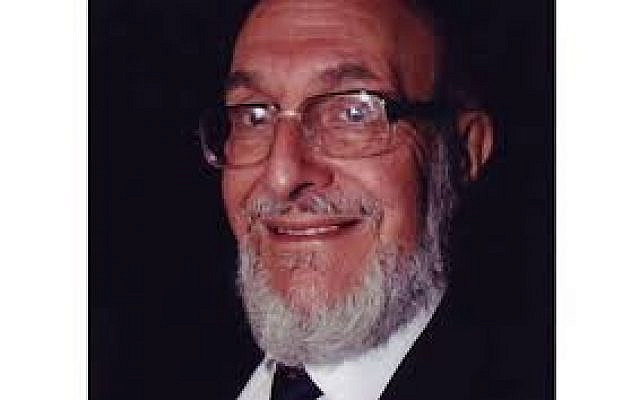 Rabbi Dr Irving Jacobs, who passed away this week, was arguably British Jewry’s most inspirational academic teacher, a man who deserved far greater recognition than he received. His talent lay in a unique blend of easy-going humour, the enthusiasm that he showed for whatever topic he was teaching and an innate sense of how to connect with his students. Whether he was teaching a class of MA students or a group of casual learners in somebody’s house, he always left his audience feeling that they had learnt something of value, impatient for his next session, waiting to come back for more.

Irving Jacobs’s specialist subject was Midrash, a topic that seized his imagination long before it became popular. He wrote his PhD thesis on the Book of Job in Rabbinic Thought and spent thirty seven years teaching biblical interpretation at Jews’ College. He was appointed Principal in 1991, unfortunately retiring due to ill health three years later. He spent the rest of his career preaching at the David Ishag synagogue in Wembley and giving informal classes in communities and private homes in London. He published two books, The Midrashic Process in 2008 and the Impact of Midrash nine years later. Constrained by dyslexia, he said that he found it hard to write; had he been able to publish more he would almost certainly have been more widely recognised.

Of all the topics he taught, the one his former students most often recall is his analysis of the treatment of the Akedah in the midrashic work Bereshit Rabbah, the earliest commentary on the book of Genesis. Referring to Shalom Spiegel’s book The Last Trial he demonstrated how the midrash reworked the story to make Isaac complicit in his binding, a willing participant in his own near-sacrifice. He showed that the rabbis whose views are attested in the Midrash were aware that the early Christians had made use of elements of the Akedah story for their own purposes. And he demonstrated how this particular chapter of the Midrash sided with those rabbis who placed the Akedah at Rosh Hashana and not Pesach. And although all this is contained in just one of the 99 chapters of Bereshit Rabbah and therefore it may seem heavy and complicated, he taught it with a lightness that made it engaging and memorable.

I first met Irving Jacobs at St Johns Wood synagogue in the late 1960s. The synagogue was very formal in those days, when the choir sang the congregation was expected to stop praying and listen. Irving didn’t listen. He joined in; it was the kedushah, he was supposed to join in. The senior warden leant forward in his box and motioned him to be quiet.

Irving Jacobs would pepper his teaching with anecdotes. A favourite of his, possibly a little apocryphal, was when he was once sent to collect the cholent for shabbat lunch. As he told it, the local baker’s oven stayed warm throughout shabbat and local families would cook their cholents in it. Because there was no eruv the parents could not collect the cholent at lunch time, so they sent the kids who were not yet barmitzvah. Irving was carrying the cholent when he slipped, dropping it all over the street. He bent down, scooped it up off the pavement, placed it back in the pot and took it home. Nobody noticed. It tasted just fine.

Although he was an orthodox rabbi schooled in the contemporary academic tradition Irving Jacobs would insist that he was not a pluralist. As principal of Jews’ College he would teach anyone, but he would not train those who might take their learning into a non-orthodox community. But his was a tolerant, non-pluralistic orthodoxy. When he published his first book, The Midrashic Process, he could have followed the traditional route and sought approbations from other orthodox rabbis. But there are only two testimonials on the back cover of the book. One from Rabbi Louis Jacobs (no relation). The other from Hyam Maccoby, orthodox himself but the librarian of the Reform seminary, Leo Baeck College.

Irving Jacobs belonged to that small band of scholars who had the ability to teach Judaism in a way that was both interesting and fun. His name may not appear on the rather short list of high profile British rabbis. But in his long career he inspired, enthused and entertained hundreds, perhaps thousands. May his memory be for a blessing.

Harry Freedman’s latest book is Reason to believe, a biography of Rabbi Dr Louis Jacobs. His next book, Leonard Cohen: The Mystical Roots of Genius will be published by Bloomsbury in October 2021.