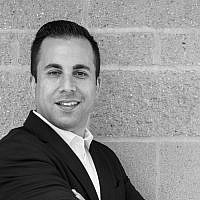 The Blogs
Nico Slobinsky
Apply for a Blog
Advertisement
Please note that the posts on The Blogs are contributed by third parties. The opinions, facts and any media content in them are presented solely by the authors, and neither The Times of Israel nor its partners assume any responsibility for them. Please contact us in case of abuse. In case of abuse,
Report this post. 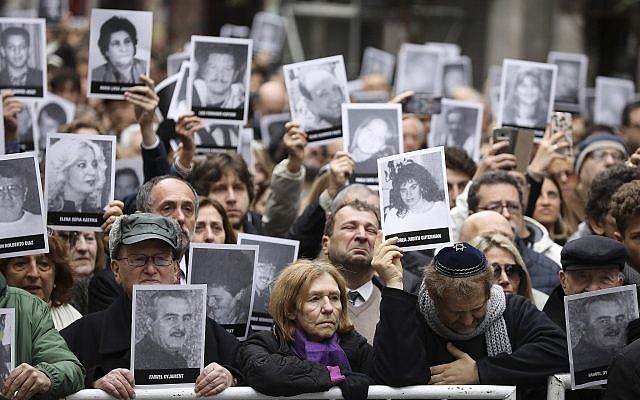 People hold up pictures of people who died during the bombing at the AMIA Jewish center that killed 85 people, on the 25th anniversary of the attack in Buenos Aires, Argentina, July 18, 2019. (AP Photo/Natacha Pisarenko)

Twenty-five years have gone by, yet an entire nation continues to search for answers and justice.

For four generations, my family was proud to call Argentina home.

With an estimated 330,000 Jews, Argentina remains home to the largest Jewish community in Latin America and the sixth largest outside Israel. Arriving primarily from Eastern and Central Europe at the turn of the last century, the community’s numbers swelled to approximately 500,000 by the mid-twentieth century. From its inception, the community was active, prosperous and fully engaged at every level of Argentinean society.

Like other Argentinean Jews, the focal point of my communal life was centred around the Asociacin Mutual Israelita Argentina (AMIA) – the main Jewish community centre of Buenos Aires – which traces its roots back to 1894.

Sadly, the calm and stability that characterized our humble lives was shattered at 9:53 am on the morning of July 18, 1994.

While I was studying in history class, more than 600 pounds of explosives hidden in a vehicle were detonated in front of the AMIA building in Buenos Aires. The explosion caused massive panic and mayhem and a cloud of smoke and dust that could be seen for miles. Within seconds, 85 innocents laid lifeless beneath the rubble of the building housing all of Argentina’s rich Jewish history.

At my school, phones began to ring. The principal rushed into our classroom to have a word with our teacher who then broke the news. We were in shock. The same dusty, black cloud that could be seen above the AMIA descended upon all of us, students and faculty alike. Frantic activity ensued and the school was quickly deserted.

My immediate reaction was concern for my family and friends, many of whom worked at the AMIA. In time, I would learn that, although one miraculously survived under the rubble, and a few others were spared, having not yet arrived at the time of the attack, three had died in the explosion. I felt the rage of countless others who survived their loved ones, and, to this day, I have not forgotten the conversations around the dinner table revealing the pervasive feeling that we were longer safe in our home.

In a spontaneous reaction, hundreds arrived where the AMIA building had stood. Many, my father amongst them, volunteered to assist in the rebuilding process. Those were dark days. The community needed to reorganize. Within a week of the attack, a community building a few blocks away became the temporary head office of AMIA. Here families sought information about the victims of the attack and where AMIA resumed essential operations, especially those pertaining to social services and community relations.

The building was also to become the place in which I started my journey as a Jewish community volunteer and where I later decided to pursue a professional career serving my community.

Over the following years, as I transitioned from my teenage to adult years, I would learn of government cover-ups, of the miscarriage of justice, and injustice in the name of greed and corruption. I would also learn of Hezbollah, Iran and other terrorist elements all suspected of involvement one way or another. While constantly reminded of the pain of those left behind, the impunity of the perpetrators reinforced the insecurity that overcame a proud and vibrant Jewish community.

Five years after the attack, on the original site, a new building was opened that symbolized the creative drive of a community willing to preserve the heritage of a cultural tradition that honours life and collective memory.

This July 18th, as every year, the bombing will be commemorated with a ceremony in front of the new, now heavily fortified, AMIA. This year’s ceremony is of particular significance as it marks 25 years since that dreadful day. Although decades have passed, the attack left deep political scars that reverberate into the present. A quarter-century later, it stands as a symbol of Argentinean society still searching for the truth. That truth must come to light and the Argentinean government, which just listed Hezbollah as a terrorist organization, should continue make every effort to ensure that the terrorists responsible for this horrendous act are brought to justice. For those who would argue that Canada should embrace the Iranian regime by re-establishing diplomatic ties, this anniversary is yet another painful reminder that Iran and its proxies must be held accountable for this horrific crime and others bearing their fingerprints. Until then, the attack continues to serve as an open wound that can never fully heal.

Viviana, Cristian, and Guillermo, I will never forget. Porque tenemos Memoria, exigimos Justicia. Because we have memory, we demand justice.

About the Author
Nico Slobinsky is the Director, Pacific Region at the Centre for Israel and Jewish Affairs (CIJA) in Canada.
Related Topics
Related Posts
Comments