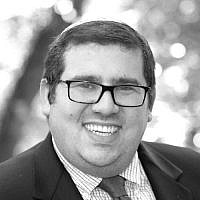 The Blogs
Eytan Kenter
Apply for a Blog
Advertisement
Please note that the posts on The Blogs are contributed by third parties. The opinions, facts and any media content in them are presented solely by the authors, and neither The Times of Israel nor its partners assume any responsibility for them. Please contact us in case of abuse. In case of abuse,
Report this post.

The Seder is a night of “fours.”  For example, there are four questions, four children, and four cups of wine.  For each of the four cups, we are reminded of the four promises that God made to us regarding our Exodus from Egypt.  In Exodus Chapter 6 verses 6 and 7 we have those promises laid out: “Therefore, say to the Israelites: ‘I am the Lord, and I will bring you out from under the yoke of the Egyptians (1). I will free you from being slaves to them (2), and I will redeem you with an outstretched arm and with mighty acts of judgment (3).  I will take you as my own people, and I will be your God (4). Then you will know that I am the Lord your God, who brought you out from under the yoke of the Egyptians.”

But for the discerning eye, one discovers that there is a fifth promise present in verses 8. It states, “And I will bring you to the land I swore with uplifted hand to give to Abraham, to Isaac and to Jacob. I will give it to you as a possession (5). I am the Lord.” This verse promises that the Exodus from Egypt was not simply about bring freed from bondage, but also about inheriting and settling in the land of Israel as well.  Why was this verse not including in the Seder’s count?  Should there not be five cups of wine?

The answer most often provided was that the Seder as we know it was being constructed following the Temple’s destruction, when we were no longer sovereign in our own land. It was too painful to include that promise that God had made as we no longer possessed full self-determination.  Instead, the authors of the Seder hid the fifth cup in plain sight.  The cup that represented God’s promise for a better future where we controlled our own destiny.  That final cup is Elijah’s cup, as the prophet Elijah is promised to arrive to usher in the promised future, where we are once again free in our land.  The fifth cup has always been there, we just never really noticed.

Ever since I learned this understanding of the fifth cup, I’ve searched for the hidden fifths throughout the Seder.  The four questions are, in actuality, one question and four statements (which make five total).  When we would examine the four children, we would ask who the fifth child could be?  Famously, in his 1957 pre-Passover letter, the Lubavitcher Rebbe, Rabbi Menachem M. Schneerson, proposed that “The Fifth Son,” is any Jewish man or woman who “is conspicuous by his absence from the Seder service.”  These individuals are “lost children” who are choosing to not participate in the Seder and the Rebbe is calling upon all those reading his letter to do the work of inviting them in.

Another example of the hidden fifth child, the child who isn’t there, is the child who perished in the Holocaust.  In this scenario, we are called to remember those who are unable to be at our tables for the Passover Seder because they perished during the Shoah.  Once again, this is a child who is unable to be present, but whose presence is very keenly felt.

This year, another “hidden child” has been brought to our attention.  A child who has always been there, but whose presence we have, all too often, chosen to ignore.  I’d like to call this fifth child, the “left-behind child.”  These are the Jews who, due to mobility challenges, a general lack of access or resources, or some other reason felt unable to access much of Jewish life.  This child is the new person in town who neither knows how to do the Seder nor knows where to go.  This is the now widowed adult who no longer has someone with whom to share the Seder.  The person who doesn’t want to impose upon others, but also cannot run a Seder by themselves so they then participate in no Seder at all.

One of the amazing blessings that has come out of the terrible pandemic in which we all live is the immense amount of virtual resources that are now available.  No matter what day of the week, what time of day, or what time zone, there is a prayer service that we can join. Tremendous learning is occurring every day and talented artists are sharing their work over Facebook, Zoom, and other platforms. It appears that access to Jewish resources is now greater than it has ever been.

One manifestation of this new reality is that this Passover, there will be virtual Seders and pre-Seders going on all around the world.  As we are now all, “left-behind children,” we are developing resources and opportunities for individuals and communities to come together in sharing the celebration of the Passover Seder.  Both those we know and those we have not yet met are learning about these opportunities to share in the Seder together so that we can live the words of the Seder, in that “all who require can now celebrate Passover.”

My hope is that we never forget these fifth children, those who have all too often, been left behind. Next year, when we can (God-willing) once again celebrate the holiday with family and friends, when we are once again offering community Seders at our synagogues, I hope that we continue to remember those who were able to access Passover this year unlike any other.  I hope that our virtual resources do not diminish as a result and I pray that all our Seders are enriched by this increased participation. Because a Seder isn’t complete unless all five children are represented.