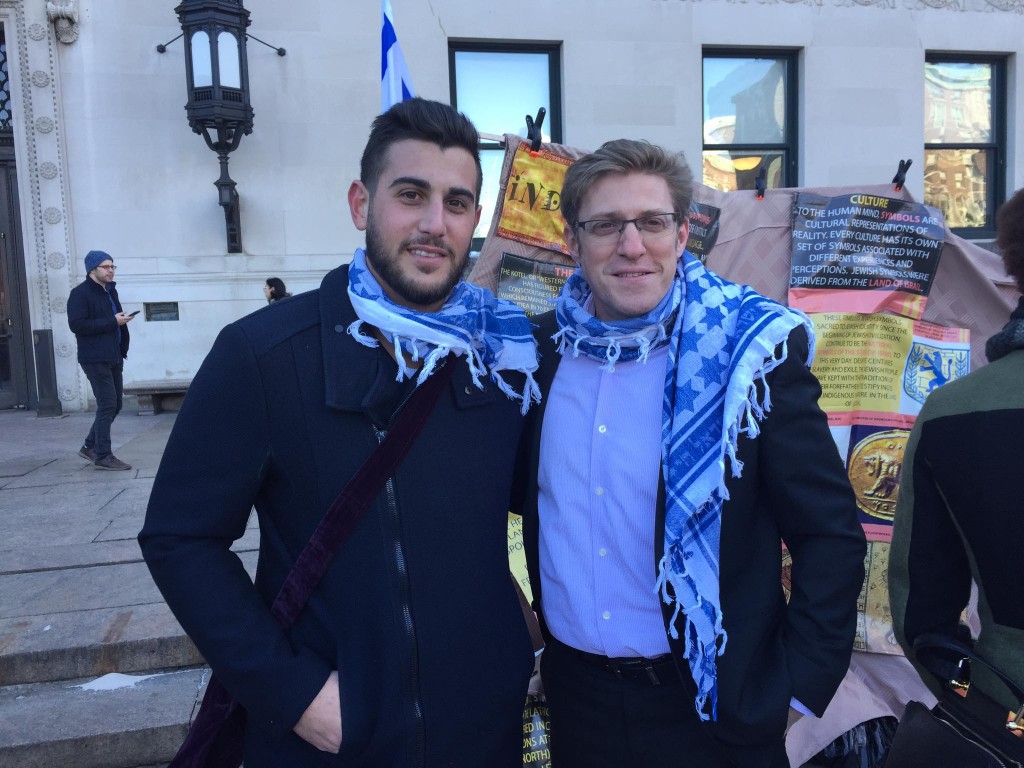 Megilat Esther or the Scroll of Esther is the book of the Hebrew Bible Jews will gather to read this Saturday night to celebrate the upcoming holiday of Purim. The Megilah speaks of a beautiful woman chosen to be Queen of the ancient Persian Empire who must hide her Jewish identity. Her very name, Esther or “hidden”, bespeaks the double life she is forced to lead. Esther grows accustomed to hiding her Jewish identity in the royal palace, but when the anti-Semitic Prime Minister is about to carry out his genocidal plot to annihilate the Jews of Persia, she risks her life and reveals her true identity to the King. This was no easy task for Esther, but because of this revelation, her strategic planning and courage to share who she truly was, the Jewish people were ultimately liberated.

The 13th Annual Israeli Apartheid Week is taking place all around the world this month. In hundreds of cities, through lectures, rallies, and demonstrations featuring “apartheid walls”, IAW participants attempt to demonize and delegitimize Israel. According to their website, “Israeli Apartheid Week (IAW) is an international series of events that seeks to raise awareness of Israel’s settler-colonial project and apartheid system over the Palestinian people and to build support for the growing Boycott, Divestment and Sanctions (BDS) movement.”

Last week was Israel Apartheid Week (IAW) at my alma mater, Columbia University. Anti-Israel sentiment at Columbia definitely existed when I was a graduate student in the early 90’s, but it has grown increasingly worse over the years and Israel Apartheid Week, which has spread to 225 cities as of 2016, plays a huge part. Many Jewish students at Columbia and other campuses feel intimidated or lack the knowledge and confidence to stand up to the BDS and SJP (Students for Justice in Palestine) activists, and as a result the slander and lies of their campaigns often go unchallenged.

This year was different.

A student group at Columbia called Students Supporting Israel (SSI), under the leadership of Jewish Israeli student Rudy Rochman, launched “Hebrew Liberation Week”. I went with a few members of the MJE Staff and some of my students to show my support and see what all the buzz was about. What I found was both moving as well as effective Israel advocacy, setting a wonderful example for students all over the country.

Over the main drag of Columbia’s campus flew a plane with a grand “Hebrew Liberation Week” banner. Israeli flags blew proudly in the wind, and an informative display simultaneously explaining the Jewish people’s indigenous ties to the land of Israel and celebrating Israel’s diverse and vibrant society was arranged for students and professors to walk through on their way to class. Most impressive was watching Rudy and others engaging students in respectful dialogue, articulating the Jewish people’s historical ties to the land of Israel. We blew the shofar, danced and sang, celebrating our Jewish pride and love for Israel right across the way from students participating in Israel Apartheid Week. It felt good not to be scared and to reveal who we truly are: proud Jews and Zionists. 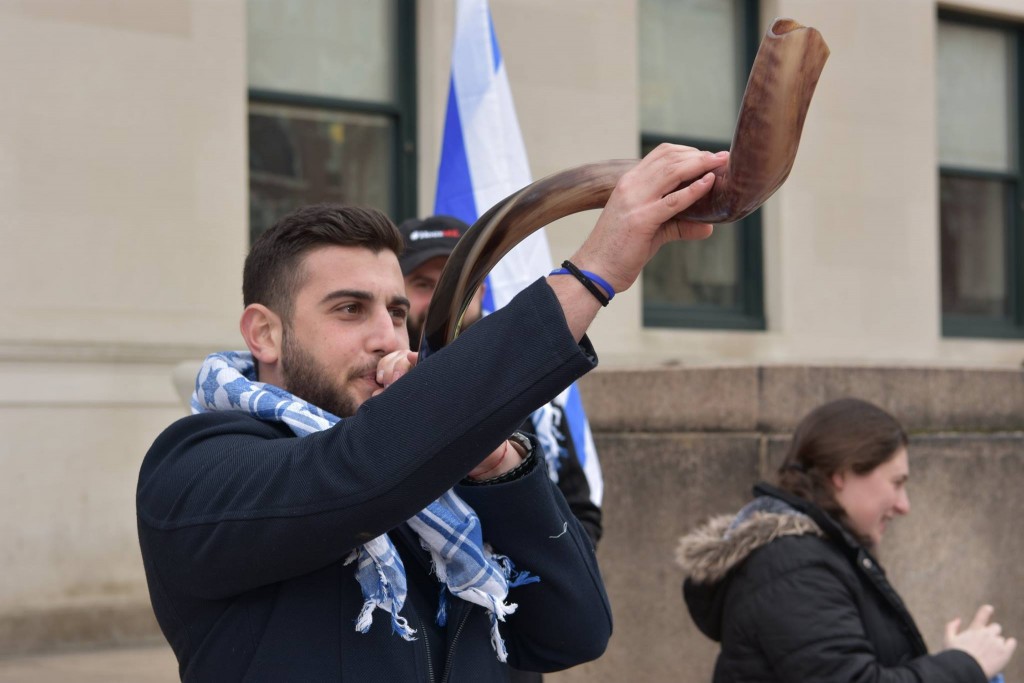 Rudy blows the Shofar on Columbia’s campus. Photo by @idost_nyc.

I invited Rudy to speak this past Shabbat at MJE and he eloquently explained what he believes to be the root cause of Israel’s unpopularity on campus and throughout the world. Because the modern State of Israel was created in the immediate aftermath of the Holocaust, and in some measure due to the world’s sympathy at the time, the Jewish people’s connection to Israel is seen by many as a 20th century phenomenon, while the Palestinian people’s connection is presented as many centuries older. It is therefore not a big leap to assert, as the BDS movement does, that Zionism is simply the migration of white Jewish Europeans to Palestine in the wake of the Holocaust – the movement of a foreign people to usurp the land from the indigenous Palestinians.


If you heard or read President Obama’s speech in Cairo when he first took office, this was essentially the way he described Zionism to the Arab world he was addressing. The thousands of years of virtually uninterrupted Jewish presence in Israel, the two Jewish Temples which stood for almost 1000 years in Jerusalem, the DNA evidence linking over 90% of Jews to the Levant (Landmark Study Proves 90% of Jews Are Genetically Linked to the Levant), and the fact that to this day we are called Jews because we descend from ancient Judea (ie-modern day Israel), is completely negated in today’s narrative, as is the overwhelming archeological findings which confirm a Jewish presence in Israel for over 3000 years.

We have to change the narrative of Israel as a modern day colonizing power, to that of a people who are as indigenous to the land as the Native Americans are to this country. Few are knowledgeable of the history, including many in the Jewish community. For all those interested in learning more about the Jews as an indigenous people, I highly recommend reading the work of Ryan Bellerose ( Are Jews Indigenous to the Land of Israel? Yes.). Ryan is a Native Métis from Canada, an Indigenous Rights Activist, and a proud Zionist, whom we have also had the honor of hosting as an MJE guest speaker. 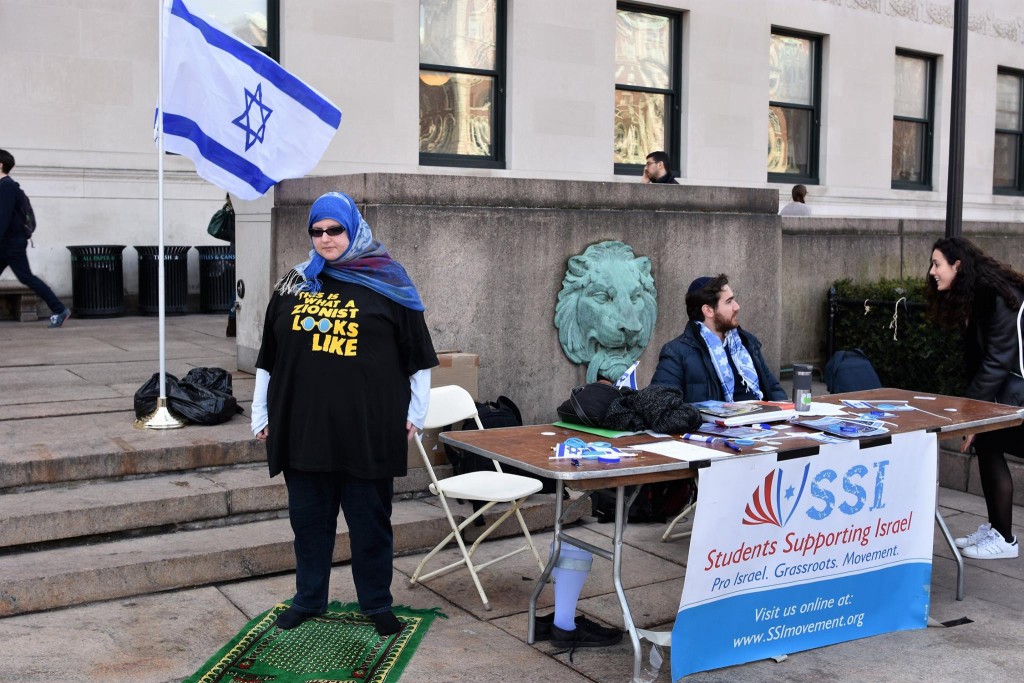 A change in narrative will not in and of itself create peace, but it will negate the argument being made that the Jewish people’s existence in Israel is immoral. As Rudy pointed out, peace will only come when the two parties sit down and recognize the legitimate existence of the other to the land. Only when both sides are properly informed and respect the other’s real connection to the land, can a true peace process begin.

We have to change the narrative and it must start now, before the minds of more young people are poisoned with propaganda and untruths.


As I walked through the Hebrew Liberation Week display, I saw a student turn to her friend in tears. Her friend asked why she was crying. “I didn’t expect to be affected by this,” she replied. “I usually try to ignore Israel Apartheid Week, and just keep my head down quietly. I’ve never felt like I could or should take a stance. But now, hearing the shofar blow, seeing other students proudly waving Israeli flags and dancing… it’s really something to behold on this campus. I feel proud. I feel liberated.” 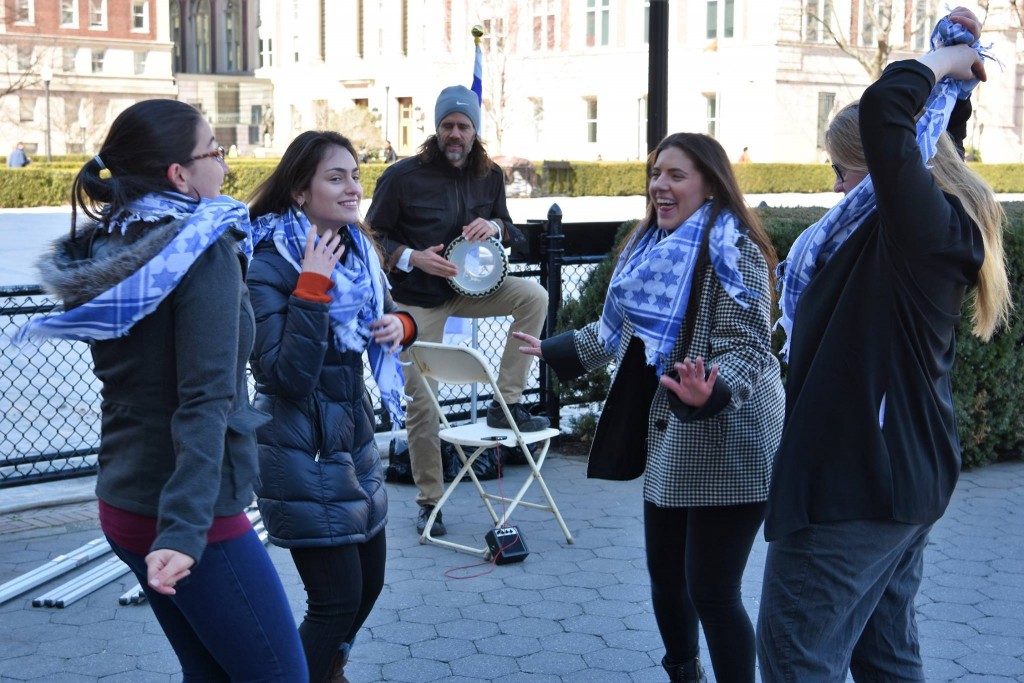 Students dance and sing in celebration of Israel. Photo by @idost_nyc.

On Purim we wear masks and costumes to symbolize how Esther was forced to hide her true Jewish identity, and to celebrate the salvation that comes when we unveil the truth behind the mask. It’s time to come out of hiding – to take off the mask and tell the world where the Jewish people came from and where their future lies: the land of Israel. 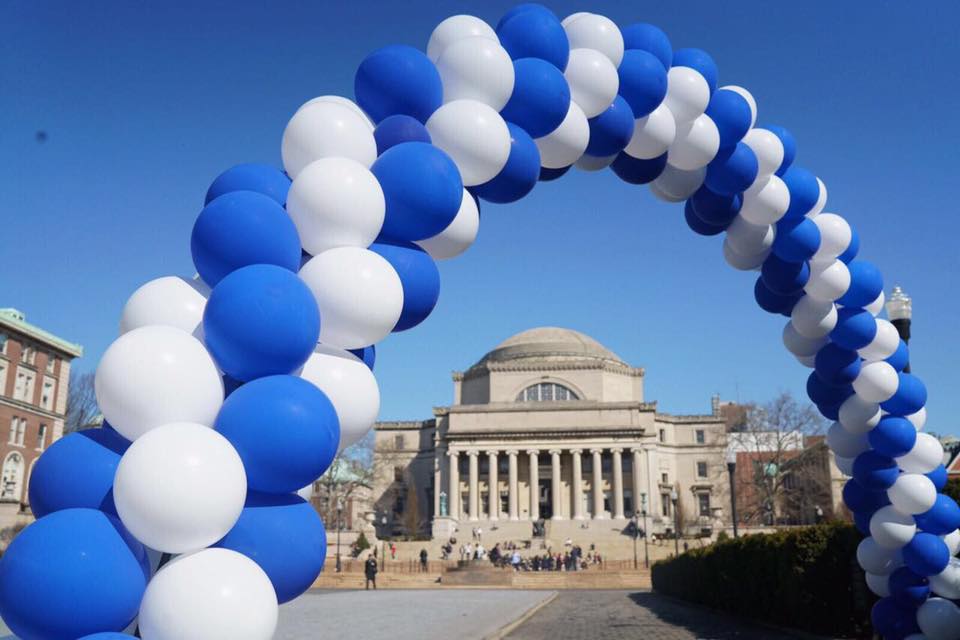 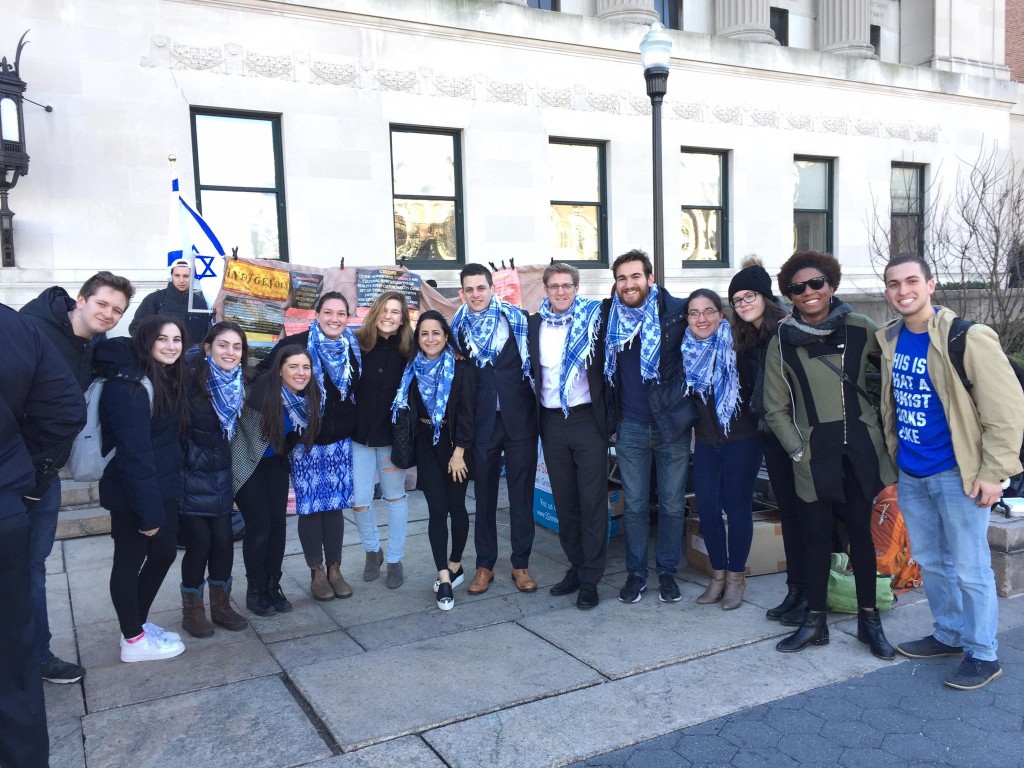 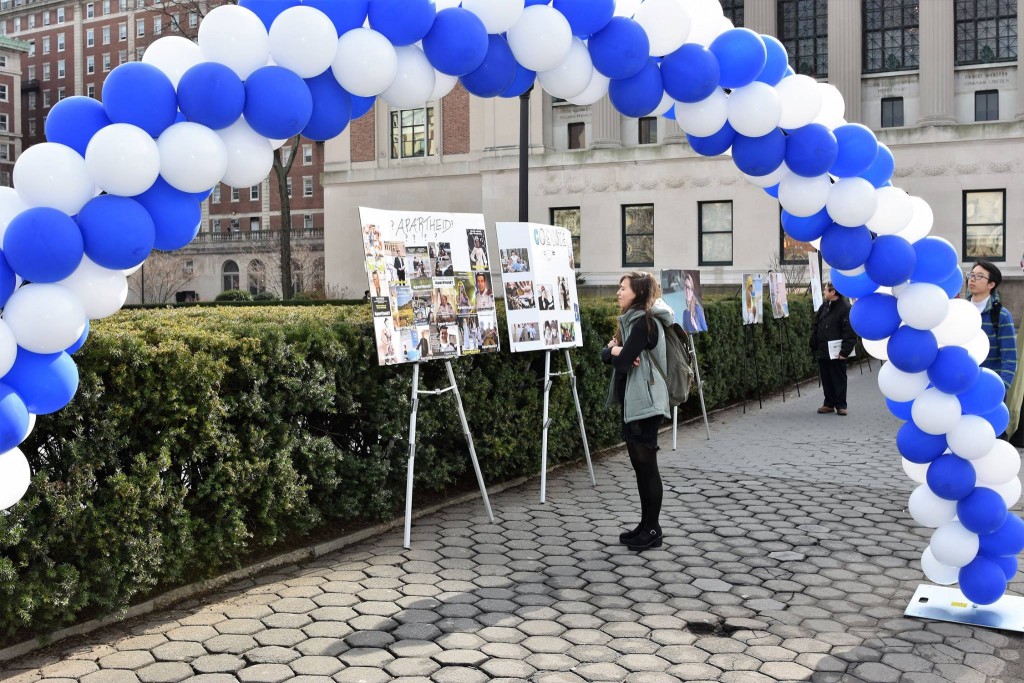 For a closer look at the SSI Hebrew Liberation Week display, check out photos HERE.