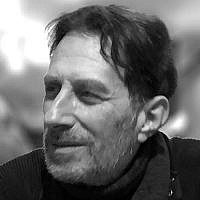 The Blogs
Moshe Goldberg
Apply for a Blog
Please note that the posts on The Blogs are contributed by third parties. The opinions, facts and any media content in them are presented solely by the authors, and neither The Times of Israel nor its partners assume any responsibility for them. Please contact us in case of abuse. In case of abuse,
Report this post. 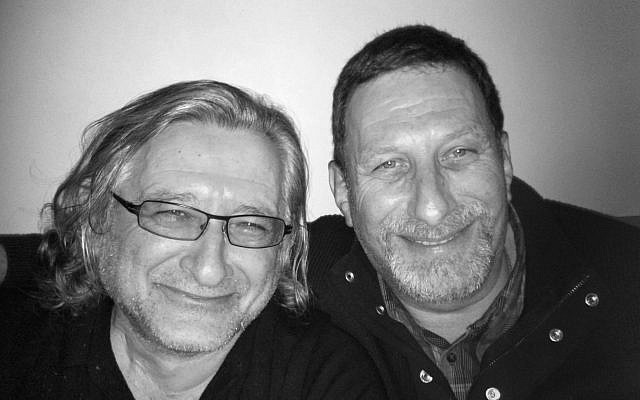 A review of “Sing This at My Funeral: A Memoir of Fathers and Sons” by David Slucki

I was always going to read Sing This at My Funeral as soon as I got it.  It’s a book written by my cousin David Slucki in which the two main protagonists are his grandfather Jakub Slucki, who was my favourite uncle, and his father Charles ‘Sluggo’ Slucki (pictured here with me) who was my oldest cousin, my very good friend, and my childhood hero.

So, as soon as David brought me a copy on his most recent trip home to Melbourne, I devoured it.  I must say I read it with a number of non-literary intentions.  Do I figure in the book?  Do my parents appear there?  Is it an accurate portrayal of the family?  How has he translated the stories I remembered and in fact passed on to him, into literature?  All very selfish, very egotistical, and very shallow questions, and a very insular and shtetldike oysblik (small-townish view).

Well, it turns out that that is a valid way to read Sing This – it is a great little family history, interesting because it’s my family and not very different from thousands of other Jewish families that made their way through Eastern Europe during the turbulent and tragic events of the mid-20th Century.  I enjoyed finding little vignettes about my mother, my aunts, my grandparents.  I loved reading my very own impressions of my older cousin and what made him a great teacher and leader.  And seeing my uncle’s little cottage in 1950s’ and 60s’ inner-city Melbourne come to life filled me with waves of nostalgia.  I admit that there were at least 50 pages that I reread a few times just to take myself back to my childhood.

However, all of that, on its own, is merely a distraction.  It is not what has this book stand out.  I’d like to think that I read it with a critical eye, that I’m unbiased. The author didn’t ask me to write this review.  I wrote it in fact, because I think that Sing This is an important book for three major reasons, the first two being fairly obvious, and the third being somewhat unforeseen.

Sing This is an historical account.  Sure, it doesn’t have footnotes and it quotes only lightly from typical historical sources – old letters written from one brother to another, interviews carried out with family members and friends, photographs of gravestones, and a few old documents.  But don’t be fooled – this is oral history at its finest.

That should come as no surprise.  The author is an accomplished historian, who has written or co-authored a number of books and articles, pretty much all of them on the subject of Jewish 20th Century history, The Bund, and the Holocaust.  He is an Associate Professor of Contemporary Jewish Life and Culture at Monash University in Australia and has also taught at The College of Charleston in South Carolina.

But it’s history for non-historians if I can say that.  That’s not to say that it’s of no use to an historian.  On the contrary, this is as useful as any history of the Holocaust.  I must’ve read over 100 books on the period 1933 through 1945.  I’ve read them with a pencil in one hand, taking notes, highlighting bits here and there, then discussing them with professional historians, family members, and others.  I’ve gone through their footnotes, sought out the primary and secondary sources, gone on to read those papers and other books, and totally immersed myself in the subject. Sure, I’ve done that as an amateur historian – my doctorate is in Mathematics, a field far removed from History.

But any student of the Holocaust, whether a professional scholar or an interested amateur, can learn a lot from this oral history.  In fact, the story of sole survivors, their murdered first families, their grief, their despair, their resignation, and their subsequent second marriages and relationships with their second families, has received only scant attention in the literature.

By now, we’re very familiar with the Nazi killing machine, its main instigators and managers, its system of concentration camps, forced labour camps, and death camps.  We’ve read a lot about the history of the development of systematic methods of murder and the ways that German efficiency was brought to bear on them. There is definitely considerable documentation about life (and death) in the ghettos and camps and the hardships of life as a survivor and an immigrant.

And, particularly in the past twenty years or so, a large body of research has been carried out on survivors in hiding, family separation, and the stories, the psychology, and the traumas of second and third generation survivors.

However, that issue has hardly been addressed. The issue of the countless men and women who were violently and suddenly left widowed and childless, and later found a new partner, created a second family, and spent the rest of their lives coming to terms with the loss while trying to build a new life, forge a new relationship, and parent new children.  My uncle Jakub was one of them, and while his story was particularly tragic, it was typical of many hundreds, probably thousands of similar such stories.

But, how would one write about it?  Well, by telling the story of one’s own family.  And that’s what the author of Sing This does masterfully.  He writes his grandfather’s history, and gives it the treatment it deserves, that of a unique story of a unique individual.  But at the same time, the reader is given this in its historical context, and thus immediately becomes aware of the myriad of other survivors who must have experienced similar tragedies.

I knew my uncle’s personal history, the loss of his young wife Gitl, and his two boys Shmulek and Chaimek, but I never put two and two together.  Reading it here, I see him as the eternal Wandering Jew, I see him as a representative of his whole nation, grieving over his mid-century loss, and doing everything in his power to overcome it and proclaim to its perpetrators “I’m still here!”.  At the same time, it took everything he had, and unleashed untold trauma and burden on at least the next two generations.

Beyond its historical significance, Sing This is a well-written, engrossing memoir that I found hard to put down.  It is part documentary (with several interesting photographs) and describes life on the run for Holocaust survivors and post-war Jewish life in inner-city Melbourne.  But above all, it is a beautifully crafted piece of creative nonfiction – the “literature of reality” as Lee Gutkind described it.

This genre is distinct from the historical novel, the kind that Michener or Uris mastered.  This is not “based on a true story”; it is a true story.  But it’s written with literary flair, the characters come to life, and whether you know the ending or not, you’re left waiting anticipatorily as you turn the pages.

And one little personal note.  The author never met his grandfather who died 6 years before he was born.  And he never set foot in the little workers’ cottage in North Carlton which is like another character in the book.  But I did.  And he really brought them to life – I felt like I was back there, sitting and eating and talking to my uncle in that little dining room with all the newspapers and television and vegetable soup and herring and anchovies.  This was my childhood he was writing about and describing it as though he’d been there himself.

Now if that were all, this would already be a great book.  But there is one more thing, and that is the theme that winds its way throughout the entire story.  That theme is duty or obligation –  flicht in Yiddish.  But it is also mixed in with responsibility and burden.  And above all….. guilt.  Jakub’s guilt for surviving while his family perished coupled with the burden he took on to suffer throughout his life, and the duty he passed on to his children to remember.  His son’s sense of responsibility to do something great with his life, and the author’s own guilt about growing up as a privileged kid in a middle class suburb of Melbourne and not having to suffer the way his grandfather did.

And this psychology and these emotions are not explored just for their historical significance or voyeuristic indulgence.  No, everything seems to lead to one destination.  The exploration of Jakub’s grief, Charles’ burden, and David’s sense of responsibility is intertwined with David’s questions about fatherhood, how to bring up his young son, how to pass on his Jewishness, his history, his family life-force, the zeitgeist – all the while avoiding the passing on of those negative emotions.

This, to me, is the main essence of the book – what we call in Yiddish Di Goldene Keit (the Golden Chain).  The passing down, from father and mother to child, all that it is to be Jewish.  Beyond religion, beyond nationality, beyond culture. It is what every Jewish parent is faced with, particularly in the post-Holocaust era.  The author is clear about this – he’s sub-titled the book A Memoir of Fathers and Sons. And while the project likely started as a therapeutic exercise – his father Charles passed away suddenly less than four years ago – I think it quickly transformed into something more worldly.

This is a book worth reading.

About the Author
Moshe Goldberg was born in 1953 in Melbourne, Australia, to Polish Jews who emigrated after the war. He has a degree in Philosophy, a doctorate in Pure Mathematics, and a post-graduate diploma in Computer Science. Moshe lives in Melbourne, has travelled extensively throughout Australia and the USA (where he lived for 8 years), and still dabbles in the Recruitment company which he founded, and his daughter now runs. He also writes about Jewish topics, Australian sports, and inner suburban Australian history.
Related Topics
Related Posts
Comments