I’m sure that all of us have been following the events in Houston, as a result of tropical storm Harvey, with interest and horror. We’ve seen terrible images and read heartbreaking stories of people trapped on rooftops, homes destroyed and lives lost. We’ve also read and heard stories of incredible strength and courage, people who faced down fear in order to help others.

As someone who devotes their life to the care of older adults, one of the images that I saw haunts me and will, I am sure, continue to stay with me for years. It’s a photo of the residents of a nursing home that was flooded. There are multiple residents in the photos, some in chairs, many in wheelchairs and the water is swirling around them, up over the wheels of the wheelchairs, nearly grazing the armrests of those chairs. 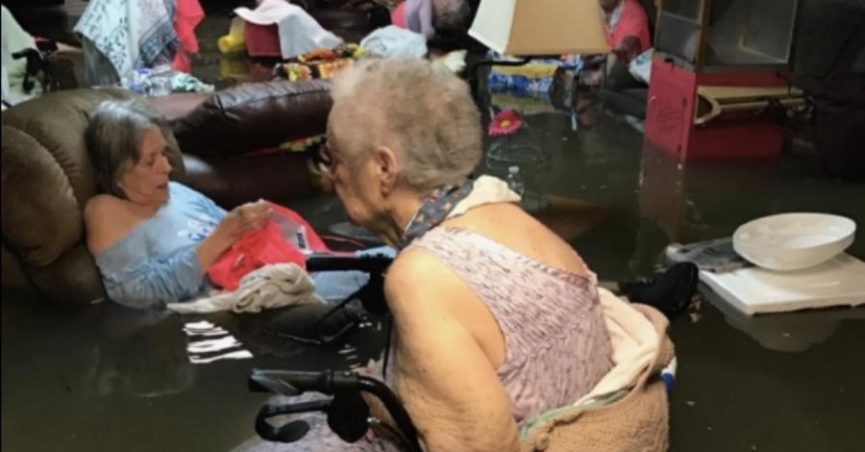 I suspect that this photo was the object of discussion among many this week, it certainly was one that engendered much conversation among my colleagues. In fact, you didn’t have to get much farther than “Did you see . . .?” before the other person would share their reaction with you. The most frequent response, beyond shock, was “Where was the staff?” trying to understand how these elders would have been left to their own devices, left in terrible and increasing danger.

Contrast that with what took place at Seven Acres in Houston, a nursing home and assisted living complex that is one of our sister Jewish long term care agencies, active members of our association, AJAS, the Association of Jewish Aging Services. On Monday, members of AJAS were inundating the national office with calls and emails—what was happening with Seven Acres? Were they okay? Were they impacted by the storm? Did they need help?

I had the opportunity to be a part of a call with my counterpart at Seven Acres on Monday afternoon. He shared with us that their campus, which had never had water on it in its 50 years of existence, had experienced significant flooding. The first floors of both buildings, a total of 160,000 square feet, were completely flooded. Residents were all safe, they had been moved to higher floors and, while one of their emergency generators was not working, they had one running and had anticipated the worst and brought in an additional mobile generator. They had electricity but no air conditioning but he said that it was cool there so all was okay.

He shared with us, almost as an aside, that his own home was completed destroyed. He told us that Seven Acres was fully staffed, that many staff had left their homes and their families to be in the buildings and ensure that the residents were safe and well. He calmly told us that he thought they would likely face a year of rebuilding and then had to get off the phone because he was heading to help with a Bingo game with the residents.

I share this story not just as a testament to Seven Acres, their leadership and their staff but also because I know that any of our Jewish facilities and their staff would react in the same way. We often talk about our “foundation of Jewish values” and this is a clear demonstration of what those values are and what they mean. We do believe in “honoring thy mother and father,” we do believe that the trust placed in us to care for vulnerable elderly is a sacred trust, we do hold ourselves, always, to a higher standard.

Our staff and residents have begun their own efforts to try and help. Residents wrote letters, created art and made a video, all to be sent to the residents at Seven Acres so that they know they are not alone and that our thoughts and prayers are with them. Staff made contributions, through AJAS, to support Seven Acres in this time of need. And residents, too, are working on fundraising ideas to help provide financial assistance to those at Seven Acres. One of them explained her motivation to me as tikkun olam, our obligation to “repair the world.” “We have to take care of each other,” she said. Indeed we do.