The IDF blog has a rather intemperately-worded item today: 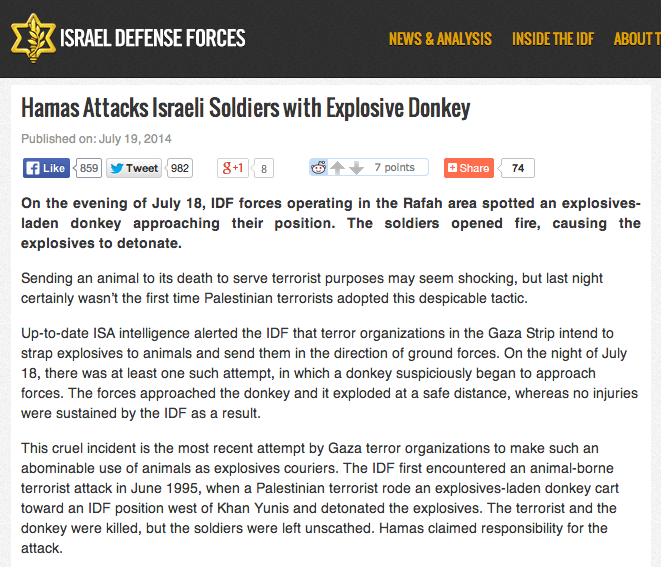 The IDF Spokesman’s Office asserts that this is shocking, despicable and abominable, but using animals as weapons of war is far from unique.

The US and Soviet navies have used trained dolphins, the Soviet Army have used exploding dogs; and the Romans used anti-elephant flaming pigs.

For an organisation like Hamas which lacks other guided delivery systems, the donkey-high explosives system achieves a synergy of resources and requirements.  It is, however, hard on the donkey.

Blowing up donkeys in human conflict is an animal welfare issue. Here in Britain we take the welfare of Equus africanus asinus very seriously. In 2012, the last year for which figures are available, The Donkey Sanctuary of Sidmouth, Devon, took in over £32 million. The British people are not only interested in British donkeys. The UK Friends of Corfu Donkey Rescue took in £24,624 or so in 2013. The Gambia Horse and Donkey Trust took in £104,375 in the same year.

Not that I would compare charitable giving, but for purposes of comparison the UK United Jewish Israel Appeal took in just under £10.2 million in 2013, or roughly 1/3 of the take at the Donkey Sanctuary. All these figures come from the website of the UK Charity Commissioners.

The same source shows that Safe Haven for Donkeys in the Holy Land took in £570,861 in 2012. The Safe Haven, run by British expat Lucy Fensom, is located on Moshav Gan Yoshiya, a community named for Josiah Wedgewood the English pottery pioneer. It’s just across the Highway Six toll road from Tulkarem.

They have emergency mobile numbers for reporting donkey abuse:

If you are in Israel/the Palestinian Territories and need to report a donkey which you think needs help in an emergency, please call 0547 523170 or 0577 523170 (please note these numbers are for emergencies only – for all non-urgent queries please use the UK details below and we will pass your message on).

I should point out that even when a donkey needs help in an emergency, if the donkey is carrying large quantities of explosives one should contact the emergency services.