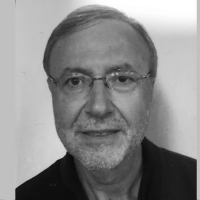 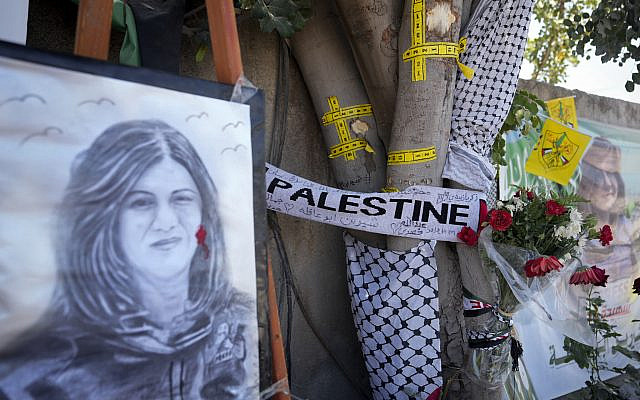 Yellow tape marks bullet holes on a tree and a portrait and flowers create a makeshift memorial at the site where Palestinian-American Al-Jazeera journalist Shireen Abu Akleh was shot and killed in the West Bank city of Jenin, on May 19, 2022. (AP/Majdi Mohammed)

There is no doubt that Israel must come clean and release the findings of its investigation into the tragic death and the subsequent police behavior at the funeral of the Al Jazeera correspondent Shireen Abu Akleh. Her death was indeed tragic, regardless of what one may think of her reporting, and her funeral should not have turned into a clash between the police and the pallbearers.

Abu Akleh’s death drove home the point that being a journalist in a conflict area is dangerous. A Google search shows that so far this year alone 23 journalists lost their lives in the line of duty. Some names did make it into the news besides Abu Akleh. A French journalist, Frederic Leclerc-Imhoff, was killed in May in Ukraine – he was observing what was supposed to be safe passage for Ukrainian civilians out of an area of heavy fighting. A British journalist, Dom Phillips, was murdered in June in Brazil’s Amazon while investigating illegal rainforest exploitation. (A Brazilian indigenous populations expert, Bruno Pereira, was murdered with Phillips.) A Chilean journalist, Francisca Sandoval, died in May in what has been described as “taking part in a dangerous assignment.”

So why is it that two major news organizations, CNN and the New York Times, chose to invest time and resources into investigating Abu Akleh’s death only and ignore the 21 other deaths? Both CNN and the New York Times described in great detail how their multiple reporters went about investigating the circumstances surrounding her death on May 11. According to the Times’s investigation, “[we] traced the bullet to an Israeli military vehicle.” The Times further claims that there was no shooting coming from the Palestinian side, which took place somewhere else – that is according to Palestinian sources. At least the Times does not claim that Abu Akleh was killed deliberately.

That claim is made by CNN. Their investigation “suggests that Abu Akleh was killed in a targeted attack.”

Let’s ignore the fact that the Palestinians have so far refused to provide the Israelis with the bullet that killed Abu Akleh. Let’s instead ask ourselves why did CNN and the News York Times decide that the Al Jazeera reporter’s death was more important than those of other journalists?

I believe that there is only one answer to this question. Both news organizations, which obsessively focus on Israel, are under constant pressure on social media to present the Jewish State in as negative light as possible. Both news organizations choose and then write or film stories that most of the time in the end reinforce the view of Israel as a pariah state. The more you dump on Israel – not the Jews, God forbid – the more responsive you appear to the social media pressures and ensure that your bottom line is safe. No matter how you look at these reports, this is today’s antisemitism.

About the Author
Tom is a retired journalist and a long-time Jerusalemite.
Related Topics
Related Posts