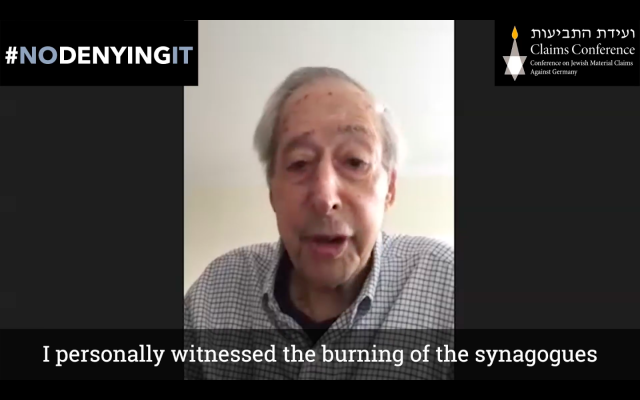 Every year, as we commemorate the historical milestones of the Holocaust, we do so with fewer and fewer survivors with first-hand memories of those moments. This week, as we remember Kristallnacht, the Night of Broken Glass, it is important that we not only spend this time commemorating what was lost but ensuring that legacy by educating future generations.

In November 1938, pogroms were carried out, attacks against Jews living in Germany, Austria and the Sudetenland. Kristallnacht, literally the night of broken glass, was an attack on Jews coordinated by the SA (Brownshirt) paramilitary forces supported by local citizens all while German officials turned a blind eye. In total, more than 260 synagogues were destroyed, 7,000 Jewish businesses were demolished or looted, and more than 30,000 Jews were rounded up, humiliated in the streets of their own towns, and arrested, ultimately ending up in concentration camps. This unchecked hatred was a preamble to the war ahead.

One person who will never forget the night of broken glass is Jerry Lindenstraus. “I personally witnessed the burning of the synagogues,” Jerry said in a recent video made for the #NoDenyingIt campaign urging Facebook to remove Holocaust denial.

Jerry Lindenstraus No Denying It

After witnessing the burning of the synagogues during Kristallnacht in 1938, Jerry escaped to Shanghai, a city which, by the time World War 2 broke out, more European Jews had taken refuge in than in any other in the world. However, at the urging of the Nazis, by 1943 the Jews in the city were forced into the Restricted Sector for Stateless Refugees in the Hongkou district, an area which would become known as the “Shanghai Ghetto.”Jerry was born in 1929 in Germany. Nine years later he was running for his life. Mark Zuckerberg, Jerry’s childhood is not to be debated and he urges Facebook to remove all Holocaust denial messages. Please share this video and join Jerry, his fellow survivors and the Claims Conference in asking Mark Zuckerberg to remove the hate that is Holocaust denial from Facebook. There's #NoDenyingIt.

Born in Germany in 1929, Jerry watched as the synagogue by his house was burned to the ground on Kristallnacht. After the November pogroms, at just 9 years of age, Jerry and his family escaped to Shanghai, only to find the influence of the Third Reich there as well. By 1943, at the urging of the Nazis, Jews in the city were forced into the Restricted Sector for Stateless Refugees in the Hongkou district, an area that would become known as the “Shanghai Ghetto.”

The rising voice of Holocaust deniers is why the Claims Conference launched the #NoDenyingIt campaign on Facebook, bringing the message that there is no denying the atrocities of the Holocaust to the platform that has hosted the anti-Semitic rhetoric of deniers. Facebook CEO Mark Zuckerberg made the decision to remove pages and posts from Holocaust deniers and distorters to ensure that the Holocaust is properly represented. It will be an ongoing task for all of us to make sure that the historical events and lessons of the Shoah are is correctly conveyed across all social media platforms, and that milestones such as Kristallnacht are not forgotten or misrepresented.

We often hear the mantra, “We will never forget.” But as we are finding out, the legacy of survivors like Jerry is being forgotten and for future generations, the legacy of the Shoah is in danger of never being known.

A recent Claims Conference survey of Holocaust Knowledge and Awareness among Millennials in the US revealed that 12 percent of US millennials either had not heard of the Holocaust or did not think they had heard of the Holocaust. And a previous study of Holocaust Knowledge and Awareness in Austria – one of the countries where Kristallnacht was coordinated and carried out – indicated that 63% of Austrians agree that fewer people seem to care about the Holocaust than they used to, and more than one-third (36%) of respondents believe that people talk too much about what happened during the Holocaust.  Additionally, when asked in this survey what measures, if any, were taken against the Jewish population in Austria immediately after the Anschluss, only 13% named Kristallnacht.

Recent negotiations with the German government led to an increase in pensions for survivors, including thousands from Germany, as well as additional payments to more than 200,000 survivors from other countries who did not receive pensions. Many of these survivors are living witnesses to the iconic moments of World War II and the Shoah. Their testimony is the best format for education we have, and we will soon be without it. Now is the time. We can and should use each remembrance as an opportunity to educate.

Kristallnacht commemorations are taking place around the world over the next few days. As we commemorate the events that led to the Holocaust, we must also ensure that the events of the Shoah are not just remembered but that their memory is passed on so that future generations will understand and commemorate them as well. Remembrance is a powerful and connective act. In a global climate rife with unrest, anti-Semitism and division, coming together to remember can often be healing for our collective future.

Charlotte Knobloch, a Holocaust survivor born in Munich in 1932, remembers well the events of Kristallnacht. Of this year’s commemoration events she says:

Even under the unique circumstances of this remarkable year, remembrance continues to be a powerful and important issue. An issue, I should add, that is more relevant than ever: Amid growing levels of anti-Semitism, an increased number of attacks and a pervasive uncertainty within the Jewish community throughout the world, it is more important than ever today to commemorate the date that opened the gates to Auschwitz 82 years ago. Its lessons have remained the same ever since: There is no such thing as “standing by” and there must be no inaction. The past shows us with clarity what kind of responsibility every one of us bears for our shared future.

Let’s heed Charlotte’s words. Take a moment to remember and make a commitment to educate future generations. Only then can we truly say, we will never forget.