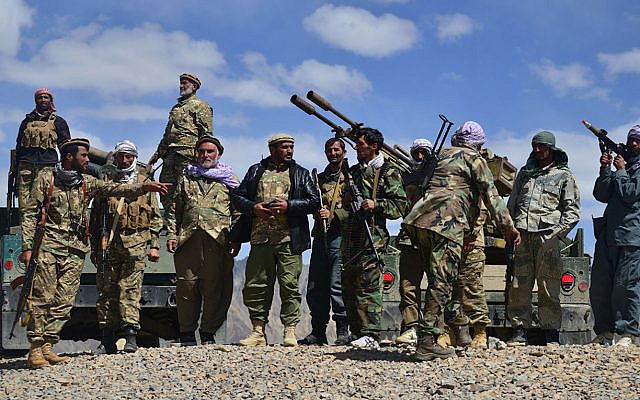 Recently there has been intense fighting between the Taliban forces and NRF guerillas in and around Panjshir and Andarab valley in North Afghanistan. NRF claimed to have inflicted heavy casualties on the Taliban. The Taliban denies this claim of NRF but admits that fighting has taken place with NRF. National Resistance Front (NRF) is the biggest anti-Taliban armed group believed to have several thousand fighters and is led by Ahmad Massoud, the son of the late Northern Alliance commander Ahmad Shah Massoud. In an exclusive interview given to Manish Rai, Editor, Viewsaround Mr. Sibghatullah Ahmadi Spokesperson of NRF said that resistance has a presence in most parts of Afghanistan and is growing day by day. Following is the detailed interview of Mr. Ahmadi.

Q- NRF Resistance is mainly focused around Panjshir and Andarab valley. Do you think in coming times resistance will get nationwide support?

Ahmadi: Not only in Andarab and Panjshir, but we are also already present in most parts of the country.  The National Resistance Front of Afghanistan has a very significant presence in the provinces like Takhaar and Samangan. Our forces are also very operative and active in Khost of Baghlan. In general, in other provinces such as Kabul, Balkh, Badakhshan, Kapisa, Sar e Pul, Ghor, Laghman, Parwaan, Nangarhar, Badghis, Bamyan, Nooristan, Faryab, we are also in action in Jawzjaan, Kunduz, Herat, Faraah and Ghazni with people’s support. The Resistance Front stands for the protection of the lives, property, and dignity of the people, and we are endeavoring to safeguard human dignity and human rights, especially women’s rights, freedom of expression, and elections so that the people can decide for themselves about the future of the country.

It’s the people that support us. Of course, the people who were recently evicted from their houses in different provinces won’t remain silent, or people who have lost everything and have been tormented by the Taliban. The support of the people of Afghanistan is with us, and it will grow with each passing day as the resistance progresses.

Q- Taliban alleged that NRF and its leadership are based out of Afghanistan hence it lacks mass support. Is NRF leadership based within Afghanistan?

Ahmadi: The matter is what part of the leadership you are talking about. Our military commanders are at the forefront of the fight against the enemies of the People of Afghanistan. Still, the political leadership is sometimes inside and sometimes outside of the country, and that is very natural.

Q- Is NRF getting any kind of help from other countries?

Ahmadi: As mentioned earlier, it is the people of Afghanistan that support us, and that is what is most important. We have the support of our people, and the basis of our struggle is the fundamental rights of the people of Afghanistan. Furthermore, we have very good relations with many neighbouring countries and the region, and without a doubt, we have their political and moral support with us.

Q- Do NRF coordinate with other smaller resistance groups opposing the Taliban?

Ahmadi: I must say this first that we are fighting for the people to achieve freedom, security, and peace. We support all freedom fighters who are fighting the Taliban and other terrorist groups and standing for the men and women of Afghanistan and the values ​​of our people.

Q- Is NRF putting any efforts to unite all the opposition parties?

Ahmadi: We have begun our efforts to unite all politicians opposed to the Taliban. We have just held the first consultative meeting to form the High Council of Resistance, which was attended by representatives of all ethnicities, provinces, and languages ​​in the form of the National Resistance Front. We are going to hold more consultative meetings and form the high Council of Resistance

Q-How NRF is planning to counter the much-better-armed and numerically larger Taliban?

Ahmadi: There is a country standing here; people are standing up to get their rights equally, and Afghanistan is standing for girls to go to school. Women, as half of society, have the right to work, the right to education, and the right to live like human beings. The National Resistance Front is in the hearts of the people, and the people are supporting the national resistance, and this will be the biggest factor in our victory in the near future. The Taliban have taken 35 million people hostage, and this cannot continue for long.

Q- What kind of assistance Pakistan is providing to the Taliban in their fight with the Resistance?

Ahmadi: We want to have good relations with all countries, especially the neighboring countries and in particular with Pakistan, we have long borders, and we should live together in peace. Pakistan must have felt the threat of terrorism, and if the Taliban continue to dominate, Afghanistan’s neighbors will be the first to suffer from terrorism.