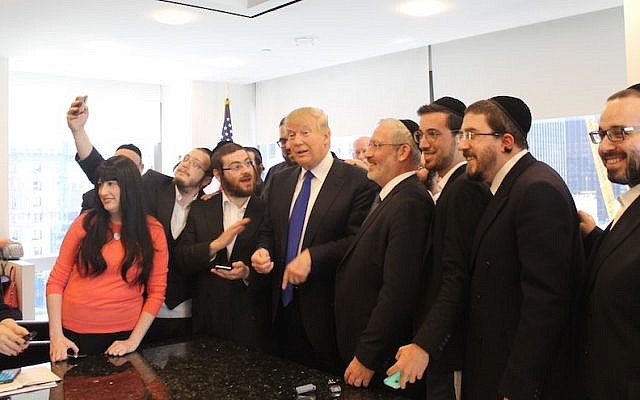 I write this article as a response to the excellent and informative article of Yisroel Juskowitz, “Probing the Trump phenomenon in the Orthodox community.”

I found this to be an important article in terms of its impact, even if I must disagree with one of the author’s main points: I do not truly believe that the Orthodox support for Trump stems from him being “good for Israel,” certainly not beyond the superficial level. I think this can be amply demonstrated: Consider that this support was already demonstrated in 2016, when Trump had not taken any specific pro-Israel actions, and when he ran against Hillary Clinton, who had a proven track record of working with the Jewish State and promoting the US-Israel alliance. Consider, as well, that many of the ultra-Orthodox establishments that support Trump are not particularly pro-Israel themselves: Many of the more ardent Hassidic and Litvish communities are ambivalent or even hostile to Zionism, but still support Trump.

No, my own analysis yields a different understanding of the ultra-Orthodox support for Trump, which is built on several foundations:

1. Conservatism v. Liberal ideology. The reflexive support that we saw for Trump in the Orthodox world after he secured the GOP nomination was not any sort of vote of confidence in Trump, but rather, a vote against the Left. For many years, the prevailing ultra-Orthodox political discourse has framed the Conservative-Liberal divide in terms of the Yeshiva v. Haskala split. The liberal Left is associated with secularism, pluralism, sexual liberty — effectively, all the things that the ultra-Orthodox world perceives as existential threats. The scientific process is a threat to tradition; pluralism is a threat to the typically insular ultra-Orthodox community life; and sexual liberty runs counter to the obsession with sexual suppression that has gripped the ultra-Orthodox world in recent history. In this context, the Left — as a general ideology — is itself perceived as an inherent threat to the ultra-Orthodox community.

Conversely, the Right’s adherence to Christian traditionalism, small government (i.e., that is unlikely to interfere in an insular community’s lifestyle or attempt to force integration) and sexual regressivism is perceived as perfectly suited to safeguarding the traditional ultra-Orthodox communal life, not least owing to the similarities between traditional Jewish and Christian beliefs in this regard. For this reason, the ultra-Orthodox community reflexively supports conservativism. And, I suspect, when the conservative party handed it such an imperfect, perverse and exhibitionist candidate, the Orthodox establishment felt the need to compensate for those flaws by deifying him, to ensure adherence to the party line. The reasoning, of course, being that the man himself is less important than the conservative ideology that elected him.

It is important to remember as well, in this regard, that in the ultra-Orthodox mindset, religion is morality and God is its source; there is no separating the two. This is why the sort of appeals to morality or altruism typically posed by the Leftist platform have very little effect on this community, as there is no conceivable cause or policy initiative that could be seen as more important than the preservation of the “Torah lifestyle,” as commanded by God.

2. Mishpacha. “Trump’s Jewish grandkids” are brought up in almost every conversation I have with yeshivish supporters. This is because Jews in the public eye — and above all else, Orthodox Jews in the public eye — are seen as “Mishpacha,” and subject to an implicit duty of support. For this reason, even though many of the more extreme communities would deride the religiosity of Ivanka Trump as an individual, when it comes to Ivanka and Jared as public figures, they are implicitly seen as “representing” the Orthodox Jewish community, and its interests, in policy-making. By extension, Trump is a part of the “Mishpacha” deserving of loyalty, despite not being Jewish himself. I remember similar conversations around the Kiddish table when Senator Joe Lieberman served as Al Gore’s running mate in the 2000 election, wherein much was made of whether he could be considered to be “representing” the Orthodox community, based on his relative level of religious observance.

3. Uninvolvement in the State of Israel. For much of the ultra-Orthodox world — and especially that existing in the US — Israel exists more as a religious symbol than an actual country. To illustrate, I recall the Litvish “Gadol,” Rabbi Yosef Shalom Elyashiv, being lauded in my yeshiva as a figure who had “never traveled north of Bnei Brak.” This was meant to demonstrate his adherence to Torah, which was so great that he would never have wasted time experiencing Israel when he could be sitting in the yeshivas of Bnei Brak. This elevation of the “symbolic” Israel over the material has dual implications for the community’s political approach to the country:

A. It means that the “Israel” envisaged by ultra-Orthodox American Jews is not so much the current State of Israel, but rather, biblical Israel. Maps of Israel found in ultra-Orthodox homes will often depict Israel in accordance with its ancient boundaries — said to encompass all of the Sinai desert, and reaching east beyond Amman and north as far as Tyre — and include the boundaries of the traditional provinces of the twelve tribes, rather than the locations of current Israeli cities. The subtext here is that the Israel envisaged by the ultra-Orthodox is inherently expansionist compared to its contemporary version. To many ultra-Orthodox Jews, Judea and Samaria are holy ground, as is the Sinai desert, as is much of Lebanon — and all of these territories, therefore, are presumed to be a part of the future kingdom of the Messiah. Notably, the Palestinians are entirely absent from this vision. One can understand, under these circumstances, that the ultra-Orthodox community largely finds itself opposed to the surrender of any territory between the river and the sea, for any reason, and without regard for the particular circumstances of the moment. This makes the Republican position of unreserved support for Israel more palatable to said community than the Democratic position, which, while voicing support for Israel, tends to temper that support with the expectation of progress toward a peace arrangement with the Palestinians — one that would inevitably involve territorial concessions.

B. This also means that the ultra-Orthodox tend to lack interest or education in respect of the actual political and security environment that the State of Israel exists in, and, therefore, are much more easily persuaded by slogans and symbolic support than by actual strategic support and cooperation. This explains the blind spot mentioned by Mr. Juskowitz, wherein the community ascribes huge significance to declarative statements about Israel’s entitlements to territory, but very little significance to the current administration’s foreign policy decisions that have seriously jeopardized Israel’s security and alarmed its security chiefs.

What does all of this mean for the future of the American ultra-Orthodox community and its involvement in politics? Unfortunately, I believe it means that we can expect to see more of the same — or worse. Demographic trends in the US clearly show a more liberal and secular society developing over time, as the white majority loses its grip on the legislature and millenials begin to occupy policymaking positions. With these circumstances taking shape, the Orthodox community will likely continue to polarize into those that embrace a more modern and integrative approach to the wider society (such as today’s Modern Orthodox movement), and those that further entrench themselves in the regressionist Christian-conservative movement, in an effort to forestall any perceived threats to the Torah community life. It is my sincerest hope that the majority will see the wisdom in the former approach, but all the same, it is important to understand the source of these trends and the motivations of this community. It is not sourced in specific commitment to racism, xenophobia or the other domestic policy planks of the Trump administration, nor in any particular loyalty toward the Jewish state. It is merely the same Jewish survivalism that has persevered and informed the Orthodox establishment’s policies for centuries, and that continues to persist to this day.