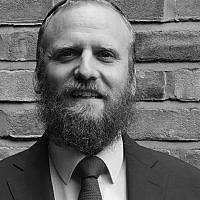 The Blogs
Eli Levin
Apply for a Blog
Please note that the posts on The Blogs are contributed by third parties. The opinions, facts and any media content in them are presented solely by the authors, and neither The Times of Israel nor its partners assume any responsibility for them. Please contact us in case of abuse. In case of abuse,
Report this post. 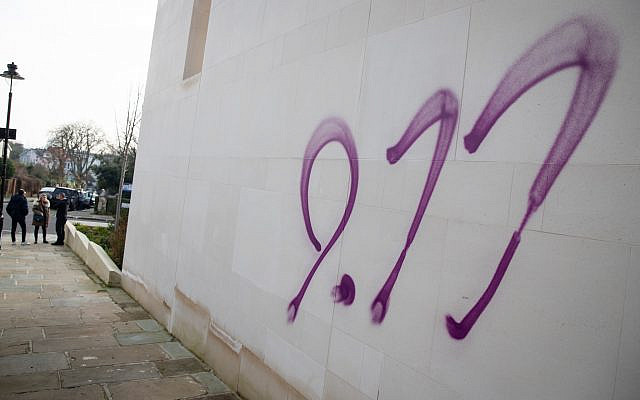 Antisemitic graffiti in the form of a 9/11 sprayed onto the outside of the South Hampstead Synagogue in North London. (Photo credit: Aaron Chown/PA Wire via Jewish News)

I didn’t expect a quiet Sunday 29th December morning to begin with the horrendous news that, overnight, our new shul building, plus a dozen other sites in the neighbourhood had been daubed with antisemitic graffiti. But then, we would never expect this at any time and why should we?

Unbeknown to us, soon after the flickering flames of our Chanukah candles had burnt out, a cowardly act under the cover of darkness, sought to kindle hate and disunity on our Hampstead streets.

At the dawn of a new decade, we hope that knowledge will continue to flourish, dialogue continue to expand and tolerance ultimately triumph. For a moment, these aspirations appeared to hang in the balance. The images of a Magen David and 9.11 painted on shop windows and a large 9.11 painted on the beautiful stonework of our new shul, made me reflect on the alarming rise of antisemitism. Sadly, we are not alone. Society is unfortunately littered with xenophobia, Islamophobia, homophobia, misogyny and racism.

It then occurred to me that one of the areas targeted was right next to a boutique kosher restaurant which, until recently didn’t exist. Prior to its opening, the notion of a kosher restaurant in Hampstead was but a dream. Another location with graffiti was opposite a second new kosher restaurant, with its large premises and tasteful décor – the first of its kind in London to be open on Shabbat under the auspices of KLBD and a hub of Jewish activity. The third spot was our own shul – rebuilt from scratch a few months ago to cater for the developing needs of a thriving Jewish community. I felt a sense of pride that Jewish life in NW3 has reached a new level. It would seem that others had noticed this too…

In the immediate aftermath, we have experienced an overwhelming outpouring of concern and support from our own members and across the Jewish community, but also from our neighbours, the Police and CST, local MPs, Camden councillors, inter-faith groups, churches, diocese, the Association of British Muslims and The Sikh Council. Strangers have called, emailed and sent cards. One person offered to travel from Nottingham to help clean the graffiti while another from Ireland phoned to find out how we were managing, having experienced hate crime himself.

As our loyal caretaker, who is not Jewish, scrubbed the paint together with us, he remarked that the incident had made his blood boil. Indeed, I initially felt the same way. Yet, in response to the pain, I draw on the solidarity and determination of the people around us.

To our neighbours in Camden – of all faiths and none – thank you so much for enabling us to rely on you as true friends. You, too, can rely on us to stand with you against hatred of any form and to fulfil our mission of being an inclusive faith community. Later this month, we look forward to welcoming over six hundred school students from across Camden, during a week of educational workshops about the Holocaust, genocide, tolerance and Judaism as a living faith. There is truly more in common than divides us.

To our own members and neighbouring Jewish organisations – let us carry on with courage and unity. As a proud Jew walking the local streets these last few days, I have enjoyed warm conversations and smiles of encouragement.

As for the perpetrators of this despicable act – instead of demonisation and othering, end the vandalism and graffiti, but paint a picture of co-existence and respect. South Hampstead Synagogue is ‘More than just a SHul.’ We are a place that values our own traditions, celebrates diversity and prioritises contributing to wider society. Our community was established in the 1930s by refugees and God willing, we are here to stay.