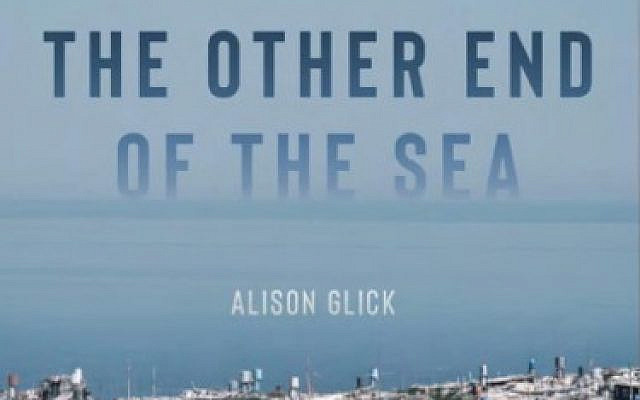 The first description of Israel in The Other End of the Sea by Alison Glick (Interlink Books, November 2021) is harsh. “A sandy yellow-colored structure, three stories tall, with a few high-placed windows. It was farther back from the road than nearby buildings. A whitewashed concrete wall, topped with a spiral of barbed wire surrounded it.”

“That is Ashkelon prison,” says Zayn Majdalawi. “Where I was held as a political prisoner.” He is speaking to Becky Klein, a “nice Jewish girl from the Midwest” who had previously studied in a six-month ulpan program on a kibbutz and returned to the region as a teacher at a Quaker-run school in Ramallah. After visiting Gaza, she crosses back into Israel in a 7-passenger taxi along with Zayn, a Palestinian “who had not let the devasting, scarring events of his life so far narrow his vision of the future.”

Descriptions of Israel do not get any better in the novel. While visitors feel the “warmth of Gaza” and Palestinian gardens are “verdant and intricate with bushes of fragrant basil, plain earthy potatoes, and showy trees of lemon and almond,” Israel is a land of “truncheon-wielding troops [crushing] the bones of victims,” during the first Intifada.

Although this novel’s background is the Israeli occupation, and exposure to the struggle for Palestinian rights gives Becky a “new view of the world,” it transcends political commentary and can be read as a cross-cultural love story. Becky’s first visit to Gaza “was like the blossoming of a romance,” but her real romance is with Zayn, the man she falls in love with and marries in a shotgun wedding. Marriage to Zayn, Becky quickly learns, is not what she had originally imagined. A few days after the wedding, he resumes sleeping elsewhere. He continues to distance himself from his wife, but whether this is because of the cultural gap between a Muslim and a Jew, or because of his fear of being captured by the IDF, is not clear. “I love you,” Zayn says into Becky’s hair, in a rare moment of outward affection, but he quickly adds, “Take care of yourself,” and departs.

With Zayn constantly on the run, Becky follows her husband to the Yarmouk refugee camp in Syria, to Tunisia, and then back to Gaza. “What would I do here without Zayn?” Becky asks herself. “I came to this land without knowing him, but he had become an anchor, an interlocutor, a translator of all things Gazan and more. Could I be here without him?”

The Other End of the Sea reads more like a memoir than a novel. Eloquently written, it is full of vivid, detail-filled recollections; tourist-oriented descriptions of places and customs; and brief mentions of “memorable instances.” Yet, more than anything else, it is a bittersweet love story which questions whether it is possible to follow one’s love across the most heartbreaking cultural divides.

Alison Glick lived for a short time on a kibbutz and in a town near Haifa. Her experiences opened her eyes to the realities of Palestinians living under Israeli control. After studying Middle East History at Temple University, she lived in the West Bank, Gaza Strip, and Yarmouk Camp in Syria for six years, working as a teacher, human rights researcher, and freelance writer. Her writing has appeared in the Washington Report on Middle East Affairs, the Arab Studies Quarterly, and Mondoweiss. The Other End of the Sea is her first novel. She is based in Philadelphia.