First, a warning. Due to its generous doses of explicit sex, some of it quite kinky, this novel is intended for mature audiences only.

In Underskin by Orit Arfa (Route 60 Press, August 2017), an Israeli architect by the name of Nilly meets a thirty-something German peace activist by the name of Sebastian on a Tel Aviv beach. Nilly is attracted physically to her new German acquaintance, but baggage from the past threatens to prevent the couple from forming a serious relationship.

Nilly’s grandparents are Holocaust survivors. “The Holocaust never seems to escape me, even though I wish it would sometimes,” she thinks. “It’s just there. Always.” To discuss the Holocaust—what Nilly calls the ‘H’ word—with her German friend does not seem to be the politically correct thing to do. 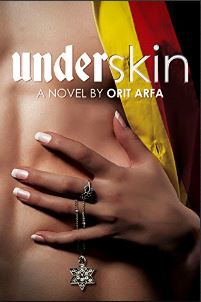 Even today, many Jews avoid trips to Germany. Nilly asks her mother, “Don’t you think we can lift the ban on German products? I mean, a lot of time has passed. It’s a new generation. Israel and Germany are celebrating the jubilee of diplomatic relations.”

Her mother replies, “Never! Not after what those animals did to Saba and Safta, the Jewish people, the world. Let them and their children pay for decades to come, if not forever.”

But then, Nilly asks the novel’s most important question. “Can we blame the people who weren’t born when the Holocaust happened?” If it’s not possible to forgive the Nazis, Nilly wonders, can we at least make peace with their descendants?

Nilly sees Sebastian not as “a German, a leftist, a non-Jew—the grandson of maybe-Nazis” but rather as “an intriguing idealistic man who’s trying, in his own way, to make the world a better place.”

Does that mean that Nilly and Sebastian can continue to see each other? Does love conquer all?

This novel makes the reader wonder how, and where, we should memorialize the Holocaust. Is it okay to joke about the Holocaust when there are Holocaust ghosts all around? Will the fear of another Holocaust always be part of the Jewish DNA?

Israeli readers may find Nilly a bit too ‘preachy’ as she expounds her rightist politics. But the protagonist’s detailed explanations of life in Israel will open the eyes of left-wing German readers for whom the ‘occupation’ and ‘illegal settlements’ are the root cause of the Israeli-Palestinian conflict.

Orit Arfa was born in Los Angeles, moved to Israel in 1999, and then to Berlin in 2016. She is a journalist, author, artist, singer-songwriter, and media personality. Orit has written extensively about Israeli society, culture, politics, and, most recently, Israeli-German affairs. She is the author of The Settler. Underskin is her second novel.

About the Author
Ellis Shuman made aliya to Jerusalem as a teenager, served in the IDF, was a founding member of a kibbutz, and now lives on Moshav Neve Ilan. Ellis is the author of ‘The Burgas Affair’ – a crime thriller set in Israel and Bulgaria; ‘Valley of Thracians’ - a suspense novel set in Bulgaria; and 'The Virtual Kibbutz' - a collection of short stories. His writing has appeared in The Times of Israel, The Huffington Post, The Jerusalem Post, Israel Insider, and on a wide range of Internet websites. Ellis lived with his wife for two years in Bulgaria, and blogs regularly about Israel, Bulgaria, books, and writing.
Related Topics
Related Posts
Comments
Advertisement