The first thing you’ll notice when opening the pages of What to Do About the Solomons by Bethany Ball (Atlantic Monthly Press, April 2017) is the Solomon family tree. You may end up referring to this tree frequently as one character after another is introduced. After all, this is a multi-generational family drama starring Yakov Solomon, his children and his grandchildren. It’s a bit confusing at first, until you get to know them all.

Yakov – “a real sabra, born in Israel seventy-five years ago. He’d gone to school with Rabin, supped with Barak, was the guest of the kings of Jordan and Morocco” – is the founding member of a Jordan Valley kibbutz who has built a very successful construction company. Yakov is married to the “beautiful and worldly” Algerian-born Vivienne. Heartbroken when her non-Jewish boyfriend fails to follow her to Palestine, she brazenly states, “I will never love you, Yakov Solomon!”

Yet the couple raise five children and the novel follows this second generation and their offspring. There is Marc, the Israeli naval commando who moved to Los Angeles only to find his asset management firm accused of a vast money laundering scheme. Marc’s sister Shira is a self-absorbed movie actress whose career is more important than caring for Joseph, the 11-year-old son she leaves to fend for himself in Jerusalem while she travels with her actor friend Ayelet.

Guy Gever, married to the family’s youngest daughter Keren, is the strangest of the lot. He chases away migrating birds that eat the kibbutz’s crops and his nighttime escapades include hunting porcupines. The hungry birds, coming back for more despite Guy’s efforts, play a symbolic role in how the Solomon children relate to their father. 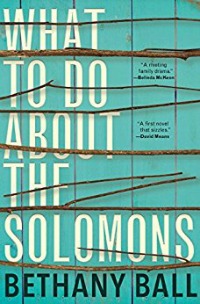 What to do about the Solomons

Vivienne says to her husband, “Yakov, you were the one who said, ‘Keep the seeds in your pocket and give it to the birds one by one.’” To which Yakov responds, “Keep the birds close so they don’t fly away.” Yakov doesn’t entirely feel affection for his offspring. “I’m done with Guy Gever and all the rest of them! I should have cut them off years ago… Offer them a finger and they want the whole hand!”

The children return home to see Yakov one last time and to claim their share of what he built. The kibbutz is the stage for their interaction; its founding is portrayed with rose-tinted nostalgia. “The kibbutzniks were the new Jews … they belonged to no God, but only the collective and the land that was historically theirs.” For Yakov, “The kibbutz was a raw factory of human survival.”

What to do about these Solomons, who return to their roots even as they continue to grow apart? Leave it to the talented author to paint a picture rich in unique character descriptions and very observant of Israeli culture. We are drawn into the Solomons’ lives, into their loves and losses, into their ups and downs. For the Solomons it is “Yom asal, yom basal” – “One day honey, the next day onions.” For us as readers, the Solomons’ story is pure enjoyment.

Bethany Ball was born in Detroit and has lived in Santa Fe, New Jersey, Miami, and Israel. She now lives in New York with her family. What to Do About the Solomons is her debut novel.