I recently finished guiding the “Write on for Israel” (WOFI) Israel mission. This is an Israel trip unlike any other Israel trip. WOFI is composed of American high school juniors and seniors from the Tri-State area. It is a highly acclaimed two-year Israel advocacy course, sponsored by Seventy Faces Media, aimed at preparing the participants for what can be the anti-Israel battleground of some North American college campuses. The applicants are carefully selected after a rigorous interview process. They come from many different backgrounds of religious affiliation, political beliefs and schooling. There is a mix of Jewish day school, public and private school students. The common factor in this pluralistic group is the students’ love of Israel and desire to receive the knowledge and tools to be effective advocates for the Jewish state. 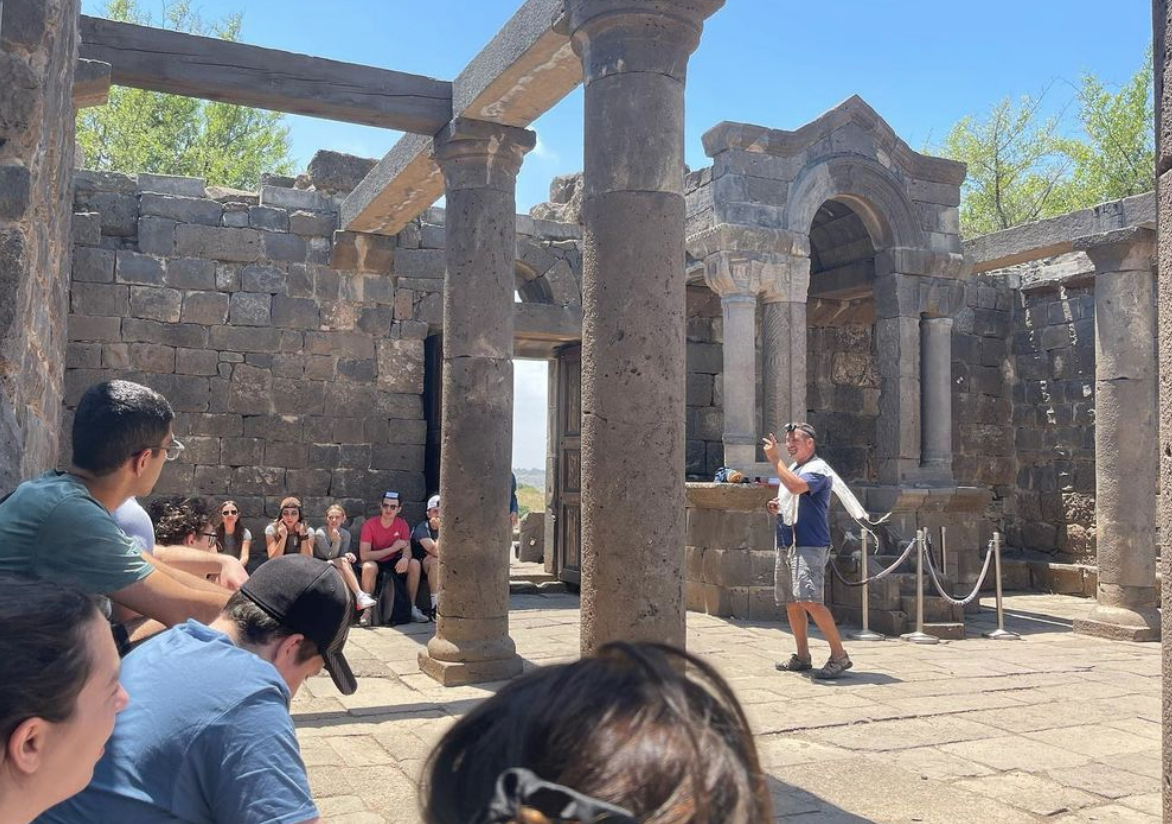 Mark Twain is attributed with observing that, “I have never let my schooling interfere with my education.” Arguably, the best education is through the school of experience. One of the most effective ways of accumulating that experience is through travel, observation and participation. Leaving ones “bubble.” If anyone wants to try and grasp the Israel behind the often sensationalist headlines, one needs to experience it in all of its glory and complexity and form ones own opinion. There is simply no other way to feel an attachment to ones Jewish identity, as there is when one stands in Israel and touches the ground and meets the people. There is nothing that one can do in ones Diaspora classroom or synagogue thousands of miles away to give one a feeling for this land and for what this land means to the Jewish people, as well as all of its inhabitants. One has to experience Israel in order to gain clarity for the achievements and understand the many issues Israel is wrestling with.

The advocacy training and instruction on the history of Zionism the Write On participants receive in preparation for the Mission, includes a whole plethora of different presenters ranging from Pulitzer-Prize winning journalists to college campus activists. The culmination of the program is a weeklong mission to Israel for the seniors, where, in addition to touring, the group gets to meet IDF soldiers, key journalists and thinkers, both Jewish and Arab, from across the religious and nationalistic spectrum. They are exposed to many different viewpoints. The intense itinerary focuses on Israel as a modern dynamic society full of rich diversity and invites the participants to both grapple with the issues facing Israel and celebrate Israel’s achievements.   The WOFI mission complements both the Jewish identity formation and Israel education of the participants. Ambassador Dr. Michael Oren, who spoke to our group, observed that,

What we do on college campuses (regarding pro-Israel advocacy) is too late. The process has to begin in Junior High school

This year we started in the Golan where we were privileged to meet with Major Y and meet soldiers keeping Israel’s northern borders safe. Major Y spoke about “Operation Protective Edge” and how much care is taken to avoid civilian casualties and the high moral standards of the IDF. He shared with us accounts of the (largely unreported) humanitarian help that the people of Israel and the IDF offered Syrians during that countries ongoing bloody civil War, despite the two countries having no peace treaty between them. Israel’s medical services alone treated more than 3,000 Syrians wounded during their country’s conflict. He said Israel did this, because this is simply the right thing to do.

We also met with IDF combat soldiers, including Lone soldiers, serving on the Golan who patrol the border with Syria. The soldiers all shared with our group how proud they were to serve in such a moral and ethical army. Hearing from the faces “beneath the helmet” deeply moved the students. Not only did it humanize these young defenders of our land, it broke stereotypes of the bloodthirsty Israeli soldier propagated on North American college campuses and throughout Europe. 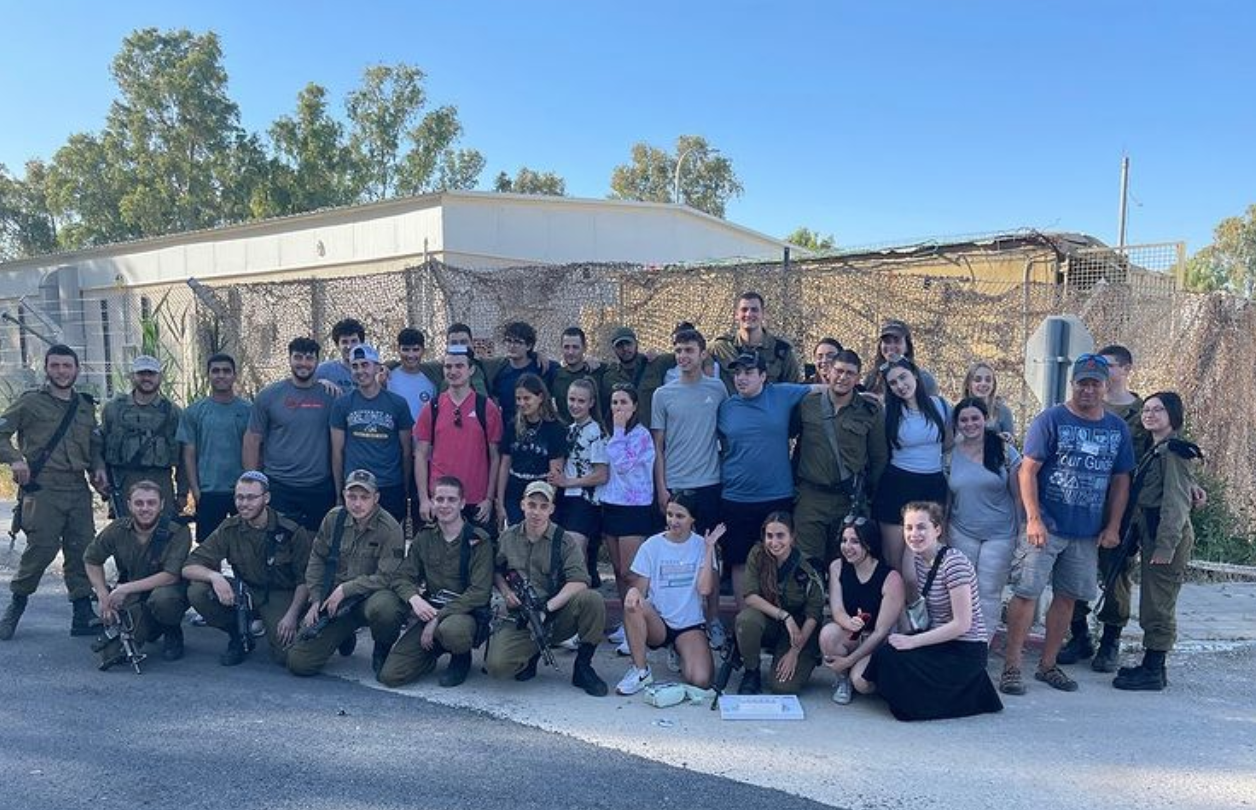 Another stereotype was shattered during our visit to “Save a Child’s Heart” (SACH) children’s home in Holon.  The Save a Child’s Heart organization provides life-saving cardiac surgery and other life saving procedures for children from developing countries and the Palestinian Authority free of charge. In addition, the organization trains doctors to become pediatric cardiologists in their countries of origin. According to the mission statement on its website (www.saveachildsheart.org) is,

An Israeli-based international humanitarian project, whose mission is to improve the quality of pediatric cardiac care for children from developing countries who suffer from heart disease and to create centers of competence in these countries, SACH is totally dedicated to the idea that every child deserves the best medical treatment available, regardless of the child’s nationality, religion, colour, gender or financial situation.

So much for “Apartheid Israel.” Our group came to tour the New SACH wing at the Wolfson Medical Center, and there we were privileged to shown around by Dr. Sagi Assa, the senior Pediatric Cardiologist. The participants also volunteered at the recuperation center where the children and their parents, or caregivers, from developing countries are either preparing, or recuperating from, the surgery that will allow them to live normal lives. Many of the WOFI group were deeply moved and asked why there is so little awareness and appreciation in the outside world for all the good that Israel does for the world.  Daniel Gordis succinctly summed it up when he stated that, in addition to striving for the benefit our own citizens, 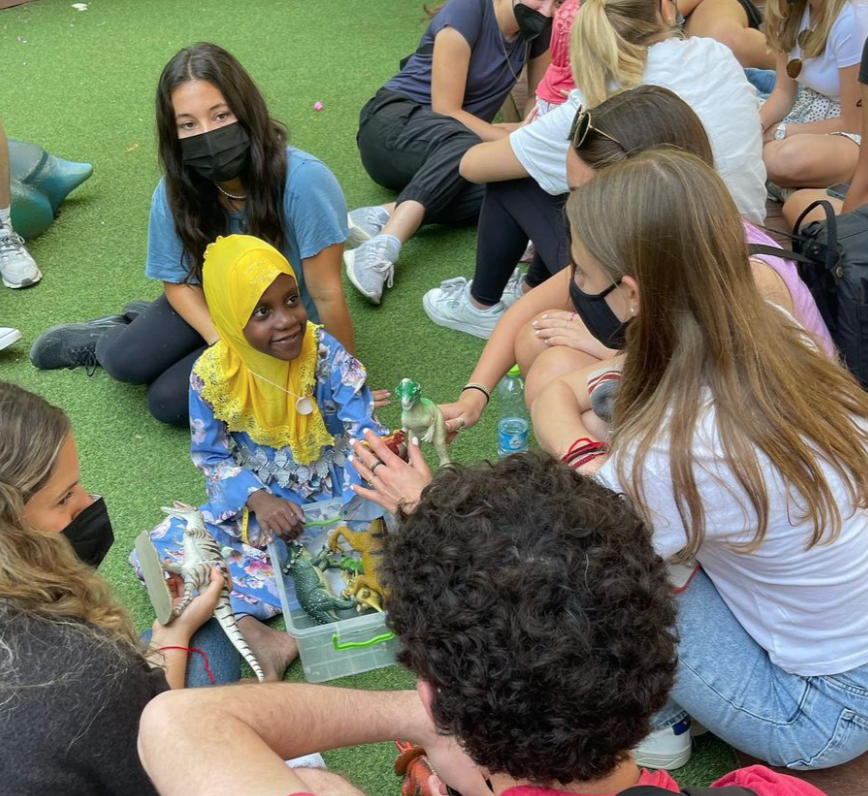 Write On particpants volunteering at the Save a Child’s Heart children’s home in Holon. Photo (c) T. Book, 2022

A core component of this years mission was the Mifgash element. A Mifgash is a cross-cultural peer-to-peer informal meeting. We met with teenager Israeli Arabs from the Israeli Arab city of Baqa al Gharbiyye. The exposure to a wide spectrum of opinions from Israelis of different religious, cultural and ethnic backgrounds, including a recent refugee from the conflict in Ukraine, facilitated a broad based understanding of issues within contemporary Israel. A successful, thought-provoking Mifgash should negate the viewing of Israel through a simplistic lens. The Mifgash is a tool for inductively gaining knowledge of Israeli society and issues, and have a positive effect on all the participant’s identity. An educationally valuable Mifgash allows the setting of the Mifgash location in Israel itself to become an inseparable part of the learning experience. 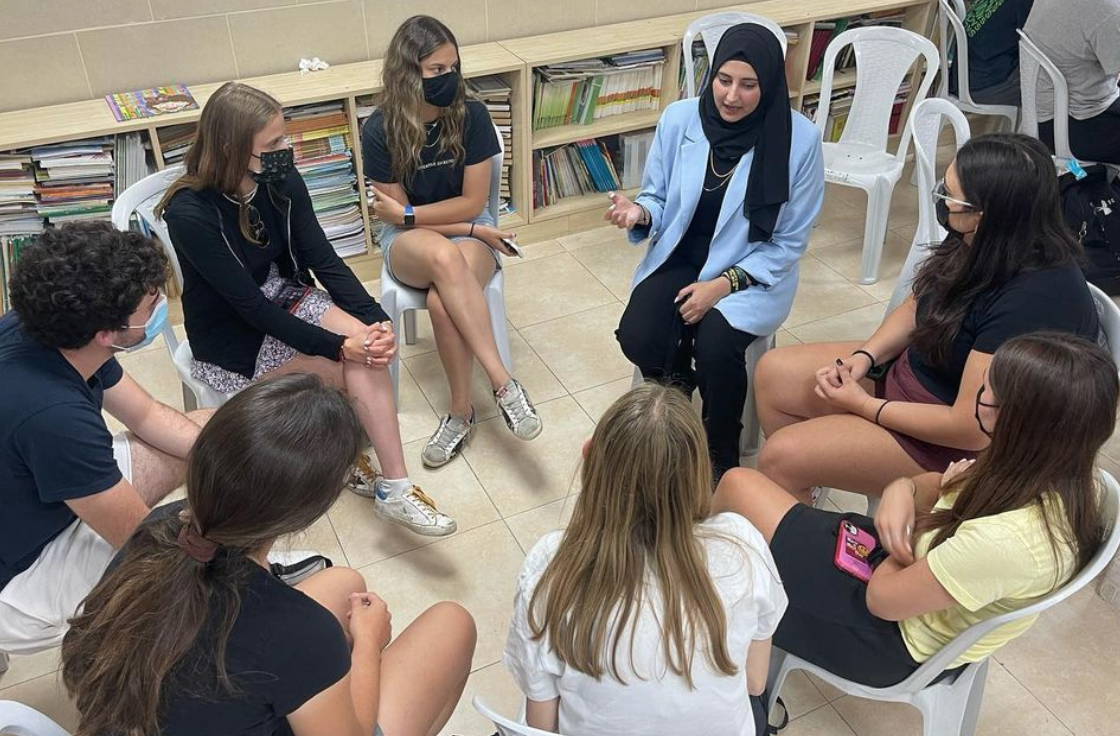 Write On participants during a Mifgash at the elementary school in Baqa al Gharbiyye. Photo (c) T. Book, 2022

Despite their different backgrounds, religiously and politically, there was a tremendous atmosphere of mutual toleration and acceptance among the participants. We also were privileged to hear from some amazing thought leaders in contemporary Israel including, David Horovitz, the Founding Editor of the Times of Israel (on Yom Yerushalayim in the TOI Offices in Jerusalem), Khaled Abu Toameh, Arab Affairs correspondent at the Jerusalem Post and other media outlets, Professor Gil Troy, leading Zionist thinker and Writer, and Ambassador Michael Oren. Linda Scherzer, the Director of the Write On Program wrote,

While one week is nowhere near enough time to unpack all the complexities of what’s happening in Israel, we hope this week has helped to deepen their connections to Israel and inform their understanding of some of the most relevant and timely issues.  It’s our hope they will take what they’ve learned from this trip to engage their peers and professors in balanced discussions, and help lead the pro-Israel and Jewish community when they get to college campus. 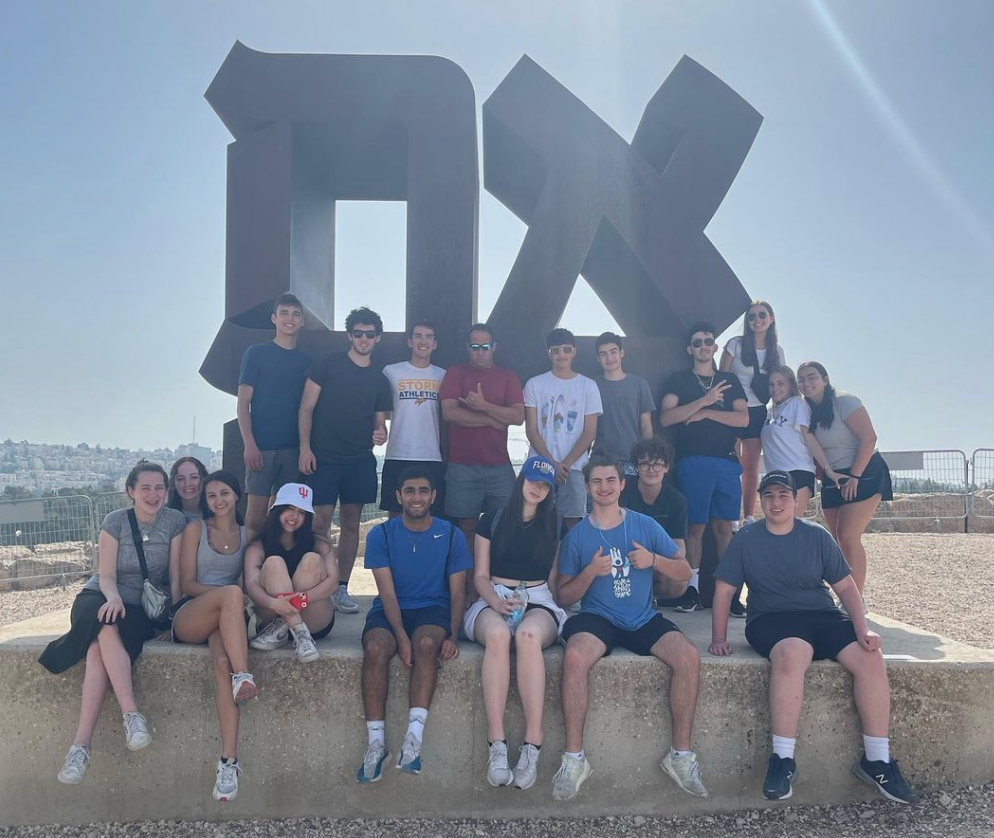 Write On for Israel participants in Jerusalem. Photo (c) T. Book, 2022
About the Author
Dr. Tuvia Book was born in London and raised in both the UK and South Africa. After making Aliya at the age of 17 and studying in Yeshiva he volunteered for the IDF, where he served in an elite combat unit. Upon his discharge he completed his BA at Bar-Ilan University, as well as certification in graphic design. He then served as the Information Officer at the Israeli Consulate of Philadelphia, while earning a graduate degree in Jewish Studies. Upon his return to Israel, Dr. Book graduated from a course of study with the Israeli Ministry of Tourism, and is a licensed tour guide. Tuvia has been working in the field of Jewish Education, both formal and informal, for many years. He has guided and taught Jewish students and educators from around the English-speaking world for some of Israel’s premier educational institutions and programs. Tuvia has been guiding groups for Birthright Israel since its inception and, in addition, has lectured throughout North America, Australia, Europe and South Africa. Tuvia served as a Shaliach (emissary) for the Jewish Agency for Israel as the Director of Israel and Zionist Education at the Board of Jewish Education of Greater New York (Jewish Education Project). He was a lecturer/educational guide at the Alexander Muss Institute for Israel Education (AMIIE) in Israel for a decade. Tuvia has lectured at both Bar Ilan University and Hebrew University. He was a Senior Editor and Teaching Fellow at the Tikvah Fund. He is a research associate at the Hudson Institute. Tuvia is the author and illustrator the internationally acclaimed Israel education curriculum; "For the Sake of Zion; A Curriculum of Israel Studies" (Fifth edition, Koren 2017), and "Moral Dilemmas of the Modern Israeli Soldier" (Rama, 2011) and has a doctorate in Israel Education. His latest book, "Jewish Journeys, The Second Temple Period to the Bar Kokhba Revolt – 536 BCE-136 CE," was published by Koren this year. To order: https://korenpub.com/products/jewish-journeys
Related Topics
Related Posts
Comments