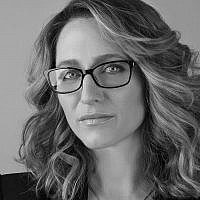 The Blogs
Brooke Goldstein
Apply for a Blog
Advertisement
Please note that the posts on The Blogs are contributed by third parties. The opinions, facts and any media content in them are presented solely by the authors, and neither The Times of Israel nor its partners assume any responsibility for them. Please contact us in case of abuse. In case of abuse,
Report this post.

CNN wants America to know that antisemitism is a problem in this country.

Recently, the network aired a special news report entitled Rising Hate: Antisemitism in America. Hosted by Dana Bash, CNN explored the alarming increase in Jew-hatred over the past few years.

“The bad news is there is antisemitism in America,” Dana Bash shared with the Jewish Telegraphic Agency.

While I’m not a big fan of cliches, the term “preaching to the choir” comes to mind. Antisemitism is a reality we have lived the world over for thousands of years.

To CNN’s credit, the network was invested enough in the problem to air the report. Unlike most who ignore the Jew-hatred pervasive in our society, Bash introduced CNN’s audience to a darkness that caused antisemitic incidents to hit the all-time high of 2,717 last year, a 34 percent increase over 2020.

While the world’s oppressed seek refuge in “the home of the free,” Jews in America are targeted with impunity. In the land of Black Lives Matter, Jews are left to wonder if we do, too.

Not to say that we don’t bear responsibility for ourselves. For years, Jewish support has helped social justice movements to emerge as standard bearers for a multitude of downtrodden minority groups. With #EndJewHatred, we have finally determined to fight for ourselves, the movement growing into a powerful force fighting for the civil rights of Jews everywhere. After hiding in the shadows for so long, our People have found our own way of shouting “No more!”

Which isn’t to say that we don’t need help from time to time.

Rising Hate: Antisemitism in America is a long-overdue introspective into America’s antipathy toward the ugliness that lurks beneath the world’s attitude toward its Jewish punching bag.

Yet CNN did not dig deep enough.

The network’s special barely managed to mention the sins of the Left in its exploration of Jew-hatred in America today. It has become not only socially acceptable but expected in progressive circles to wave one’s antisemitic flag. In fact, it is so pervasive that the practice has become normalized in places like Hollywood and Washington DC. Antisemitism is all the rage in a city where “The Squad” captures the imagination of tourists and the DC Elite alike.

Supermodel Gigi Hadid, who feeds her millions of Instagram followers regular helpings of hate, wasn’t even a footnote during the special. Hadid has called for a blood libel against the indigenous Jews she identifies as “occupiers” of Islamic lands. Her outrageous charges have even been shared by Vogue magazine with its own Instagram followers, feeding the mainstreaming of Jew-hatred in today’s popular culture.

If we don’t rip the cover off of institutionalized Jew-hatred, we will be ill-prepared and unprotected in the face of a force whipping around us with increasing speed.

And it’s not just the Internet, which has been like fuel to the fire of Jew-hatred in the 21st century. Old-fashioned harassment, vandalism, and terrorism have revealed the face of a society that secretly began embracing the Cossack philosophy toward the Jewish people many years ago.

I thank CNN for Rising Hate: Antisemitism in America Part I. But I also eagerly await a Part II, because without the rest of the story, how can we expect our children to be prepared to face a world that hates us for our religious, cultural, ethnic, and national identities? How can they empower themselves when we fail to provide them with the tools they need to stand up on their own?

#EndJewHatred is doing its part. It’s time for everyone else to do theirs.

About the Author
Brooke Goldstein is a New York City-based human rights attorney, author, and award-winning filmmaker. She serves as Executive Director of The Lawfare Project, a nonprofit organization dedicated to raising awareness about and facilitating a response to the abuse of Western legal systems and human rights law.
Related Topics
Related Posts