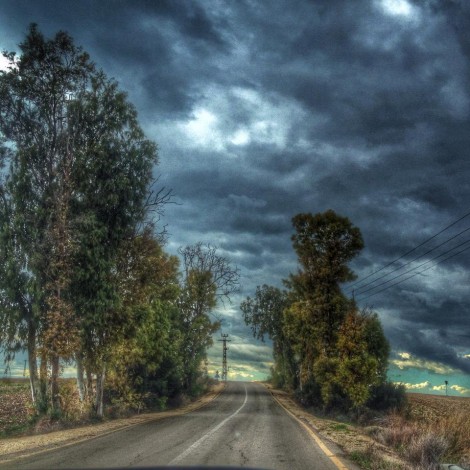 It all started on this road, yes, this one. This very road, over half my life ago everything began,  that summer I turned sixteen:

That was the summeer I wore cut off shorts, and baby t-shirts, right after my braces came off, and I started using Clearasil before I went to bed.  That was the summer I bought my first real bra. That was the summer I kissed someone with stubble, who wasn’t worried about his AP calculus test, who tasted like Goldstar and Noblese cigarettes, and who would go to Gaza the morning I slept curled up like a cat beside him.

It all started on this road,  heat stricken, parched and yellow while the bus with the “LA ULPAN” sign in the window kicked up dust as it chugged up the hill and through the gates of the kibbutz where we would be living.

That bus that held 120 of us with our heavy Jansport backpacks and heavier jet lag, I was the only one on that bus who didn’t have a seat – I sat on the top step by the driver, my legs tucked up, my arms around them, and my eyes wide open.

I’m pretty sure I was the only one on that bus that didn’t want to be there, too.  I was homesick, and tired, and I didn’t know anyone else, or myself for that matter while we lurched back and forth from the airport to the place where we would stay for a summer that stretched too long in front of me.

We picked up a soldier on the way around the bend, tired and dusty, he sat beside me, his hand never leaving his M16.

(And it occurred to me that maybe this summer wasn’t going to be so bad after all.)

That road led me to Jerusalem for the first time where I touched an ancient wall, and ate hummus, and kissed a boy on Ben Yehuda street.

That road led me down the twirling roads of Tsfat, where the air smelled sweet like melting wax and honey from the bees, and the sky was as blue as the Evil Eye charm I bought for 3 shekels at the entrance to the city.

That road led me to a garden on Kibbutz Gezer where we tilled the land and planted rosemary, where we built a menorah out of cement and mosaic tiles, where we said the Shechiyanu:

Blessed are you, Ruler of the Universe who gives us life, who sustains us, and who brings us to this moment in time.

That road led me to men and women who had helped build Israel — men and women who argued in front of all of us about the nature of the country.  Should Arab citizens be forced to sing our national anthem?  Should Israelis schools close on Eid Al-Adha?

Who are we and where are we going?

This is a question I still ask myself now while I’m back again on this road, in the middle of the memory of that summer, the summer that began this lifetime love affair with this country.

It wasn’t a straight shot — hell naw, this was no Kvish 6, back and forth and back again.  No, this road is the scenic route, detours in small towns,  long breaks in big cities, too many drinks and puking in the bushes, carsick, hungry, but wow, look out the window, right over there! See it?  Look!  Do you see that?  Can you feel that?  That’s infinity right there roaring through the crack in the window.

The colors are different now – and it isn’t a matter of perspective, although that’s changed too, after 17 years, it better change… But  truly, it’s a different season: Winter, fast and cold, green arrived in a rush of wind and rain after a parchment yellow summer that stretched all the way into December.

But  I’d know this road anywhere in any color, because I’ve been dreaming about it off and on for the last 17 years years… just like that line in that book “tonight I went to Manderlay again.”

And I would wake up from each dream to the sound of the clock radio, to the sounds of Los Angeles waking up, and oh that sense of longing, like unrequited love, split in two by an ache for that road and for the country that it led me to.

Because this road was the artery that cleaved me in two.  That made me half American and half Israeli, never both fully, never not either.  We listened to Sublime and Madonna and Oasis on that road that summer — “and all the roads we have to walk are winding,” we sang while we bumped along to holy sites and hiking spots… and it felt good: So freaking good to sing in English with other Jewish kids from LA on that bus, the songs from our favorite radio stations and high school dances…. but that road made me yearn to understand the words that others I had never known before were singing when the bus driver said “Enough! Yalla. Let’s listen to some real music.”

That road took me backwards to Ben Gurion, back to LA too fast even though I dragged my feet.

That road carried me to rock concerts with Israelis in LA, where we would blast Haim Moshe down Ventura Boulevard, where we smoked too many cigarettes because it reminded us of Tel Aviv even though the San Fernando Valley was too, too quiet, too, too early.

Kama yafim hayu otam yamim… How beautiful were those days…

I took detours, sure.  Dark alleys, deep in the recesses of bottomless futures… But I knew it was still there, that road.  Even when my eyes were squeezed shut by fear, I could feel that road under my feet, unwavering even while I weaved and fell. Unyielding beneath me — “get up, get up,” and so I did.

This road, this beautiful, bumpy road that’s the same and different as it was that summer, I’m back again in awe, and humbled, looking back and looking forward.