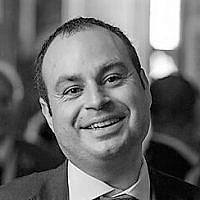 The Blogs
Robert Rams
Apply for a Blog
Please note that the posts on The Blogs are contributed by third parties. The opinions, facts and any media content in them are presented solely by the authors, and neither The Times of Israel nor its partners assume any responsibility for them. Please contact us in case of abuse. In case of abuse,
Report this post.

As the election draws closer and if the opinion polls are to be believed we are set for a landslide Conservative victory.

Given the huge issues both the Labour Party and the Lib Dems have had with anti-Semitism it is a wonder why so many on the Jewish News’ Thirty under 30 are paid up members of the left-wing establishment.

I should really declare an interest here. I was once in the Forty under 40 sneaking in at 37th and am proud of my brother in law, Michael Gladstone, who was 14th in this year’s Thirty under 30.

The Conservative Party can rightly be proud of its record of listening to and delivering for the Jewish Community; from its support for a plethora of new Jewish schools, funding of security around these schools and other community buildings across the country to its support for Israel, the party has a fantastic story to tell. Members of Parliament like Mike Freer, Bob Blackman and Eric Pickles who, in virtually his last action as an MP, pressured Tim Farron into sacking David Ward as the Lib Dem candidate for Bradford East, continue to be exemplary advocates for the community on the green benches.

There is certainly evidence of strong and increasing support for the Conservatives within the community as a whole as well. But it would be a mistake to believe that this support can be taken for granted.

Should Conservatives be worried that there are so few of their supporters on this list? There is anecdotal evidence that the younger generation – those say, between the ages of 16-22 – are more likely to be Conservative. Again, though, this may mirror society as a whole. Those who grew up under Blair may have clung to the Labour Party (in spite of its more recent failings) but are ‘Cameron’s children’ more likely to lean right? I guess we will have to wait and see, but it looks that way.

Still, the Party does need to do more to permeate this support through the community at a grassroots level. We need to be more of a Jewish force on campuses. We need a united campaigning force and a support network for those members of the community who are interested in representing their neighbours and fellow citizens at a local or national level. We need to educate people, especially candidates, about the issues impacting our community and not just leave it to the Israel groups. To give them credit, this is where the Jewish Labour Movement has had some success, and while clearly the JLM have lost the war on anti-Semitism in the Labour party they can claim some individual victories and have galvanised an activist base. Positively though, it seems that discussions around facilitating these things among Conservative supporters have begun in recent months with the need for a more formal structure identified by more forward-thinking activists..

But it’s not just at this level. As I have seen for myself, so many of our community groups and organisations are left-heavy at the top which given the current political context seems entirely counter-intuitive. At times I have been the token Tory on them – battling what I believe to be madcap and silly ideas of the outdated and now virtually extinct ‘centre-left’. People of the right need to stick their head above the parapet and not be afraid to be the ones to lead.

Ultimately, the Conservative Party is in pretty much the right place on what might be termed “Jewish issues”. Staying there will win us the right to be heard and give us the chance to woo Labour-voting and unaligned Jews in the same way that we should seek to woo those outside the community. With the right effort from Conservatives though, the 30 under 30 list may well look very different in 5 years’ time.

About the Author
Robert Rams is Head of Office for the GLA (Greater London Assembly) Conservatives, former Conservative Councillor in Barnet and proud volunteer for the JLGB.
Related Topics
Related Posts
Comments