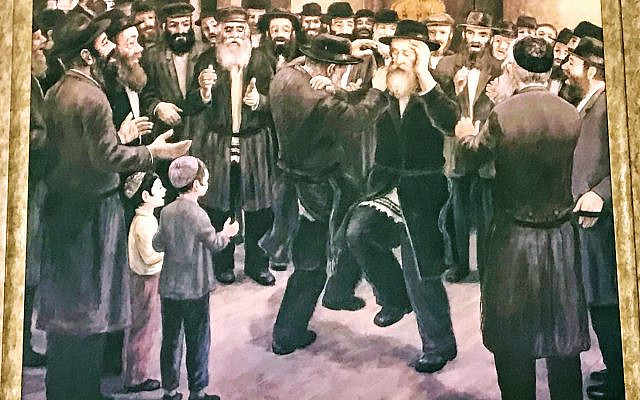 It was very exciting to be a part of the startup of a new Chabad Shabbat minyan in Rockville this week. It was only just a few weeks ago that I ran into Rabbi Moishe Kavka and took the opportunity to ask him about starting up a local Chabad Shabbat minyan, and I was surprised by his enthusiasm, and he immediately said, “Yes!” A little bit of planning and a lot of people helping in this way and that to get started, and we reached the milestone today for the inaugural Shabbat services, and it was beautiful. We were reaching out to Jews to join the prayer services as well as indirectly continue to grow and strengthen the Jewish community.

It was interesting that Rabbi Kavka spoke from today’s Torah portion of Vayetzei that Jacob came to the well in Haran and it was covered by a large rock with the flocks lying around waiting for water. Yet, the people of Haran explained that they had to wait for all the shepherds to gather so they could together be able roll the rock off the well and water the flocks. But when Jacob saw Laban’s daughter, Rachel, approaching with their flock, Jacob rose up alone and rolled the rock off the well to water the sheep. The lesson being that people are often blocked from moving forward by uncertainty, indecision, insecurity, self-doubt, hesitancy, worry, and fear, yet one man, such as Jacob, can stand up and move that big rock off the well if he just sets his mind to it and tries!

This reminded me of Rabbi Kavka, himself, who could’ve said that starting the new Chabad minyan was too hard, time-consuming, and may not succeed, but instead he stood up and jumped in to say, “let’s do a dry run and see if we can do this!” His enthusiasm was contagious, and it spread to the rest of us, who wanted to have a local minyan that we could connect with as a Jewish community and to serve Hashem in a meaningful and spiritual Chabad service.

When I arrived today, the service had started, and I was pleasantly surprised to see almost every seat already taken, and they were bringing out more chairs and prayer books. There were plenty of children eating candy, a spirited chazan leading the services, and another Rabbi helping with the Torah reading for the week. We sang the traditional Ashkenazi tunes with the prayers, and it was very spirited and alive. Of course, after the services, there was a hearty kiddish with wine, cookies, gefilte fish, and a pretty “mean” cholent to top it off.  We got to socialize with neighbors and friends and get to know new people from the community.

The bottom line is that when people say it can’t be done or to wait because it will take an entire village of shepherds to simply move the rock from the well, instead we can see that even one determined person can “rock and roll,” make a difference, and start to make something special and meaningful happen. In this case, there was a new minyan, bringing Jews together to worship Hashem, read the Torah, sing and pray heartily, and make kiddish together. It’s a lesson that even the biggest rock is no match for determination and spirit of people, and rolling that rock is just the beginning to get the fundamental water that nourishes a community.