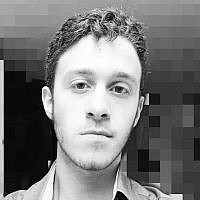 The Blogs
Yahel Gerlic
Apply for a Blog
Advertisement
Please note that the posts on The Blogs are contributed by third parties. The opinions, facts and any media content in them are presented solely by the authors, and neither The Times of Israel nor its partners assume any responsibility for them. Please contact us in case of abuse. In case of abuse,
Report this post. 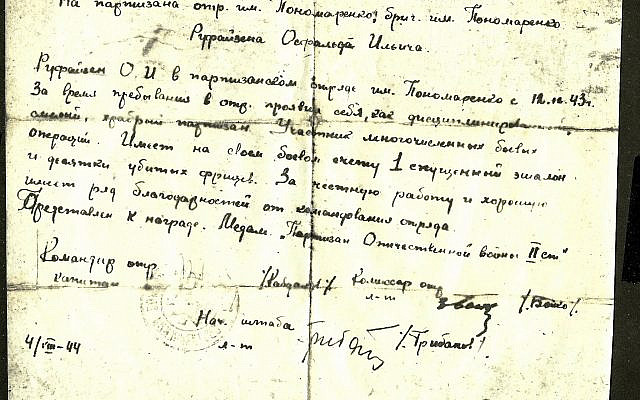 WW2 partisan letter of recommendation issued to Oswald Rufeisen by his commanders in 1944. Huddyhuddy, CC BY-SA 4.0 , via Wikimedia Commons

The Law of Return is an Israeli law, passed on 5 July 1950, which gives Jews the right to relocate to Israel and acquire Israeli citizenship.[1] Section 1 of the Law of Return declares that “every Jew has the right to come to this country as an oleh [immigrant]”. In the Law of Return, the State of Israel gave effect to the Zionist movement’s “credo” which called for the establishment of Israel as a Jewish state. In 1970, the right of entry and settlement was extended to people with one Jewish grandparent and a person who is married to a Jew, whether or not they are considered Jewish under Orthodox interpretations of Jewish Law.[2]

On the day of arrival in Israel, or occasionally at a later date, a person who enters Israel under the Law of Return as an oleh would receive a certificate confirming their oleh status. The person then has three months to decide whether they wish to become a citizen and can renounce citizenship during this time. The right to an oleh certificate may be denied if the person is engaged in an anti-Jewish activity, is a hazard to the public health or security of the State, or has a criminal past that may endanger public welfare.[3]

This article explores the intriguing historical event, how before the 1970 amendment to the Law, the Supreme Court of Israel ruled on the borders of who is a “Jew”. The Supreme Court went as far as to reject outright the argument made today subsequently to the amendment, that Judaism and being part of the Jewish people are two different things. Hence, in its verdict, the Supreme Court rejected the right of a Jew who had converted to Christianity to receive Israeli citizenship via the Law of Return.

Jumping right into our historical context, the pivotal figure, in this case, was Shmuel Oswald Rufeisen (1922–1998), better known as Brother (or Father) Daniel, O.C.D., a Polish-born Jew who survived the Nazi invasion of his homeland. During WWII, he converted to Christianity, becoming a Catholic and a friar of the Discalced Carmelite Order. Rufeisen was born to a Jewish family in Zadziele near the Polish town of Oświęcim, known in German as Auschwitz.[4] During his youth, he belonged to Bnei Akiva, a religious Zionist youth movement. In 1941, during the war, he helped to save hundreds of fellow Jews in the Belarusian town of Mir from deportation to concentration camps by infiltrating the local police station as a translator under the assumed identity as an ethnically German Pole. Furthermore, after those events, he also went on to join the partisans. While hiding in the Sisters of the Resurrection convent, he converted to Christianity, undergoing baptism.[5] After the war, he joined the Carmelite Order, became a Discalced Carmelite friar, and eventually a Catholic priest.[6]

Throughout the 1950s, Rufeisen made numerous requests to the Carmelite authorities to transfer him to the order’s monastery in Haifa, Jerusalem, while urging the Polish government to permit him to move to Israel for permanent residence. However, these requests towards the Polish government were usually denied until the late 1950s. After much persistence, the Polish government finally granted his request on the condition that he give up his Polish citizenship. Rufeisen arrived in Israel in July 1959 and reunited with his brother Aryeh, who had come to the British Mandate of Palestine in 1941. Rufeisen, who was initially given only a one-year residence permit in Israel, rendering him virtually stateless, applied for Israeli citizenship under the Law of Return, which entitles Jews to immigrate to Israel.[7] He maintained that although his religion was Catholicism, he was still a Jew:

My ethnic origin is and always will be Jewish. I have no other nationality. If I am not a Jew, what am I? I did not accept Christianity to leave my people. I added it to my Judaism. I feel as a Jew.[8]

Different branches of Judaism treat Jews who convert to other religions differently. In Orthodox and Conservative Judaism, converts are still regarded as Jews, but not in Reform Judaism. On religion-related issues, Israel follows the Orthodox interpretation of Jewish Law.

The Israeli government denied Rufeisen’s request because he had converted to Christianity. Rufeisen appealed the case to the Supreme Court of Israel. His lawyer argued that by denying Rufeisen the right to immigrate, Israel would cast itself as a theocracy in which national affiliation is equated with religion.[9] In 1962, the Supreme Court upheld the government’s decision: any Jew converting to another religion would forfeit their preferential access to Israeli citizenship (Rufeisen v Minister of the Interior, (1962) 16 PD 2428).[10] The trial ignited public debate about Jewish identity. According to historian Michael Stanislawski, the court’s decision was a defining moment in the history of the Jewish State, whose influence on Israeli Law and public opinion can be felt to this day.[9]

Therefore since 1970, the Law applies to the following groups:

Subsequently, it was the 1970 amendment which induced by the debate on “Who is a Jew?“. Nevertheless, intriguingly following the Supreme Court ruling and the 1970 amendment, the matter of Jews who had converted to another religion had all but been put to rest as individuals who were, as The State of Israel saw them, no longer Jewish.

About the Author
Yahel Gerlic is a law student (L.L.B) at the Buchman Faculty of law at Tel Aviv University as part of the IDF's Atuda Academic Law Program. He is currently interning at the Institute for National Security in the Law and National Security Program.
Related Topics
Related Posts
Comments