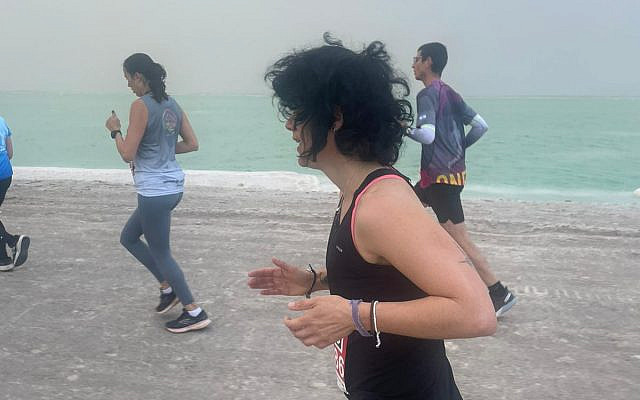 Running the Dead Sea Half Marathon - with COVID! Photo: courtesy of my running partner

What a wonderful opportunity for me, not only to fundraise for the Forum of Israeli Peace NGOs, but also for an inspirational peace project, between Israelis and Palestinians, who have joined together through various art forms. Their work was recently showcased at the highly successful peace event in Ibim (next to Sderot). Currently they are working on a multi-disciplinary art project where one of the main motifs is a dance based on a run.

What better way to fundraise for a project focusing on running, than by actually running?!

So, I am very excited to be putting two of my favourite hobbies together – running, and working towards a peaceful Israel and Palestine, I even managed to invent a new sport altogether! The name? COVID marathon running (CMR for short!)!

Okay, so what really happened: I signed up for two marathons within two months, February and March, because March is my birthday month and I wanted to achieve something super special this year. However, anyone who knows anything about running can tell you, running two marathons back to back isn’t a great idea for your body. So I chose to do the Dead Sea half and the Tel Aviv half, leading up to the Jerusalem full marathon, on March 25th.

The week of the Dead Sea half I felt a little ropey, and under the weather. I did a COVID test every day. And every day, it was negative. In fact, the morning of the actual race, I woke up feeling a lot better, jumped out of bed raring to go. It was only at 3K, when I felt as though I’d run 15 already, I realised something was very wrong!

Talk about running for peace, I was running in pieces!!!

However, I kept going, I kept struggling to breathe, and kept on running, and managed to finish in 2:06. Then I collapsed in the car and couldn’t do a thing on the long journey back. At home we did another test, and I discovered I was indeed positive.

First time (and hopefully the last!) I’ve ever run with Corona. Phew!

The next half was in Tel Aviv, and I thoroughly enjoyed it, especially running by the sea. But I was only two minutes faster. So either I really blitzed it when I had Corona, or I took it far too easy when I didn’t.

So this has been my training for one of the most difficult marathons in the world! And I love it and I can’t wait.

And I will love it so much more if at the end of it I really have made a difference.

The peace video art project has been running for three years; Israelis and Palestinians working together to create music, dance and film, confronting emotions and issues arising from their desire for an end to hostilities, and for peace. But they urgently need funding to continue their work, and hope one day to be able to publicise the project and inspire more people to work together.

Some of the Palestinians working on the project will also be running, only not in Israel.

We are going to be filming some of the runners in the marathon, and the Palestinians will also film themselves running, and all of this will be part of the final art project.

Our fundraising target? We’ll be happy with anything we raise, but… if my target time for the marathon is four and a half hours, and my friend’s from the project is two and a half…and throw in another hour or two for our Palestinian runners… how about we aim for nine thousand shekels? Or even ten?! Sound fair?

Let’s do it, make a real difference, and set an example to the world!

For peace everywhere – especially thinking of our Ukrainian friends.

Here’s to running for peace!