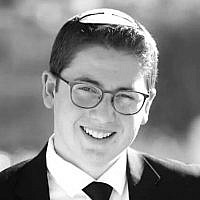 The Blogs
Yacov Segal
Apply for a Blog
Advertisement
Please note that the posts on The Blogs are contributed by third parties. The opinions, facts and any media content in them are presented solely by the authors, and neither The Times of Israel nor its partners assume any responsibility for them. Please contact us in case of abuse. In case of abuse,
Report this post.

Ari Fuld Z”L. The name we’ve heard countless times over the past few months. A name that evokes so many emotions in all of us. Ari dedicated his life to Israel and ultimately gave his life for Israel. He fought for something that we all fight for, but he went well above and beyond. He fought for the truth 24 hours a day, 7 days a week. He was so frustrated, and rightly so, because the Jewish people, who had been persecuted for so long, had finally come back home, and yet still live in extreme danger.

Ari simply couldn’t allow this to go on and did everything in his power to try stop it. Ari gave so much of himself and did so much good to simply try to make the world a better place. He never expected anything in return, he just gave and gave, before giving even more. He is a true example of a person everyone should aspire to emulate. Even if you may not agree with everything that Ari said, we must aspire to be people who do good for the soul purpose of doing good.

Since his murder, a lot of people including me have been thinking of different ways to honor Ari, and I together with Ari’s nephew, Eli Fuld, have established a team for the upcoming Jerusalem Marathon. Our team, called Team Lions of Tzion will run in the Jerusalem Marathon on Friday, March 15, 2019, in collaboration with The Ari Fuld Project and Standing Together.

How fitting it is, that our team will run in the modern, democratic Jewish state of Israel, through the streets of the old city and on the sacred hills which Ari fought for, every day of his life.

Ari Fuld Z”L dedicated his life to Israel and the Jewish people. He fought for the truth, with daily live video broadcasts that cited facts by confronting individuals who attack Israel.

He exposed the lies of hostile activists and the media, despite the constant attempts to shut him down on Facebook. He also used videos to teach Torah, living and breathing the dream of the people of Israel living in the land of Israel according to the Torah of Israel.

In that spirit, Ari’s life was also about giving – whether it be helping Jews or Arabs; and tirelessly serving the organization Standing Together, which assists IDF soldiers in need, wherever they may be. Ari’s goal in anything he did, was to ultimately do as much as possible to make the world a better place.

The story of Ari Fuld’s transformation from an already remarkable individual into a heroic figure began in the summer of 2006, when he was called up to fight in the war in Lebanon as a reservist. He left his family and fought up north, until the war ended and his unit was ordered to return to Israel.

Speaking to the Jewish Journal a few years later, Ari recalled:
“We trekked back to Israel all night long. We hadn’t eaten anything, we hadn’t slept. When we arrived at the border, we literally collapsed. We felt so alone, and the IDF said they couldn’t pick us up because they were scared of missile fire, so they told us to walk. We just couldn’t move, we had no energy left, so we collapsed.”

He continued: “Then we heard a motor coming. There was a jeep with a trailer, driving up from the Israeli side. On the top of the jeep was written ‘We love the IDF!’ and we were rubbing our eyes.”

“A guy got out and said in Hebrew, ‘Welcome home! What do you need?’ The group answered that they needed food and water. “He goes back into the trailer and starts pulling out juice, water, soda, sandwiches and chocolate. I will never forget that chocolate!” Ari said with a smile.

The man in the trailer was Rami Landau, who today runs the organization Standing Together. His father, David, started the organization to be there for soldiers whenever and wherever they are needed.
“We felt so alone until that guy came to the border, and we wanted people to understand that the men and women of the IDF are keeping us safe,” Ari said.

A few years later, David Landau called Ari and asked if he would help run his organization. Ari accepted the offer on the spot. This became Ari’s life, until September 16, 2018, when he was shopping at a local supermarket and a savage 16-year-old terrorist stabbed him, severing his main artery. Miraculously, Ari found the energy to chase the terrorist and shoot at him, attracting the attention of a fellow Israeli who helped neutralize the murderer. Ari’s final act on earth was to save others from a terrorist. Ari died shortly after.

Ari’s last project was to raise $300,000 to purchase a ten-tonne hospitality truck, fitted with pizza ovens, refrigerators and additional equipment for Standing Together, in order to make things easier for the organization, and to expand the group’s capabilities in supporting IDF soldiers.

We are working with Standing Together and The Ari Fuld Project to complete Ari Fuld’s final mission of giving. We are doing so through our team’s participation in the March 15 Jerusalem Marathon. The funds raised through this effort will go to purchasing the new truck, and the remainder will be used to fund The Ari Fuld Project.

Ari’s widow, Miriam Fuld, has created The Ari Fuld Project, a center dedicated to the memory and mission of Ari Fuld HY’D, in order to spread his message through learning and activism. The Ari Fuld Project will establish a physical center with conference and classroom facilities and a visitor’s center. An annotated archive of Ari’s videos will be available for downloading online, to be used by scholars as well as interested visitors. Ari’s teachings will be published in book format, comprising edited and annotated transcripts of Ari’s weekly Parasha videos, his live video reports and his blog posts, alongside his published articles.

The project will offer scholarships for academic research of Ari’s teachings. A Think Tank will be established to debate and issue policy positions. A fund will be created to assist pro-Israel activists and finance worthy projects in the spirit of Ari’s life’s work. The project will organize tours of Israel to disseminate Ari’s messages on Israel and Judaism. The project’s Center will offer classes teaching the art of speaking and debating pro-Israel positions in today’s media environments.

So, even though registration is closed to run, the donations are still very much welcome, and extremely appreciated. Help us keep Ari’s mission alive, and help us make the world a better place!

About the Author
Yacov Segal is a 17 year old boy originally from Melbourne, Australia. He made aliyah in 2016 with his family, and he lives in Gush Etzion. Yacov is in 12th grade, and has a deep love and passion for the state of Israel. Yacov enjoys writing about Israel and Zionism, and loves advocating for Israel.
Related Topics
Related Posts
Comments