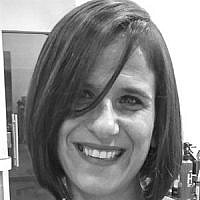 The Blogs
Dorite Shabi
Apply for a Blog
Advertisement
Please note that the posts on The Blogs are contributed by third parties. The opinions, facts and any media content in them are presented solely by the authors, and neither The Times of Israel nor its partners assume any responsibility for them. Please contact us in case of abuse. In case of abuse,
Report this post.

As an Israeli, I grew up with terror and at one point I was looking to be in different places and have different experiences. Shortly after I finished my army service in 1994, I was planning a trip. I wanted to be somewhere quiet, less stressful and with more opportunities to grow…so I picked – AMERICA…the land of opportunities. At the time, America was living the dream, for me -mainly because it was so big and free from terror.  With no suicide bombers, no exploding buses and restaurants and where no one had to carry the gas masks like it was an accessory to our outfits.

Everything was great and quiet until the morning of  9-11-2001, the biggest  terror attack on US soil. I was sitting in class, in the university, when we heard the news about the collapsing twin towers. We saw one tower fall, everyone was shocked, no one really knew what happened, but I had this feeling that made my body tremble. A familiar feeling of scare. Then, the second tower fell- I knew…deep inside I knew that it was no coincidence. It was all too familiar!  We were all shocked!

I remember looking at the classroom as if I was completely outside of this group, starring at my classmates and looking at the TV screen when suddenly I got up, took my school bag headed out of class. Someone asked me where am I going and I just looked back and told them that I am going to the city to help. Everyone looked at me as if I was a crazy stranger who just walked into the classroom. “why?” one of my classmates asked me, with disbelief. I just wanted to help, so I drove to towards Manhattan.

I will never forget the emotions and thoughts I had while I was driving; I was angry, thinking (selfishly), why did you (terror) come here to disturb my peace?; I was sad, thinking that people here are not used to be in this situation and are going to be in great panic; and I was scared- is terror really here? Will it stay? But mostly, I was determined to get to the city and help. I felt this adrenalin flowing through my body! I got to the Manhattan Bridge and I was stopped by the police and was told that I couldn’t go further into the city.I waited. What for? I was not sure but I knew that at one point my help will be needed. From that point on, everything was an act of instinct. I saw people walking on the bridge looking shocked, some running crying and screaming, covered with blood and debris. No one seemed to really know where they are going but one thing was for sure- they all needed a ride home. And that was what I did…I drove people home. I saw how terrified people were; I smelled their fear, their trauma, and their shock…all of it was way too familiar.

Around 4pm I drove home, tired, I took a shower, made myself a cup of coffee and lit a cigarette when suddenly I started crying; an uncontrollable cry. I did not know why? But I felt that I needed to just let myself go as far as my body needed me too. I cried myself to sleep. The next day I got my car washed and went back to class. My classmates thought that I was crazy and brave at the same time for what I did. Was I brave!? What was I really thinking?

Well, I wasn’t really thinking, I just acted upon instinct. Research that examined resilience in children or adults who were exposed to isolated and potentially traumatic events, has consistently shown that across different types of potentially traumatic events, people have been found to display resilience. Furthermore, factors that promote resilience are heterogeneous and include a variety of person-centered variables (eg, temperament of the child, personality, coping strategies), demographic variables (eg, male gender, older age, greater education), and socio contextual factors (eg, supportive relations, community resources).

For years after September 11, I felt emotionally separated from the event that basically shock down the entire world. I live by our (Israeli’s)  moto: life must go on.  Nothing was unusual for me emotionally until 11 years later in 2012, when I returned to Israel and I had to deal with terror every day and “be” Israeli again. It started when my husband and I were looking to buy a house and we found one, a dream house for the both of us, only it was located in a small town in what’s considered outside the green line , the border that was created in 1967. The day before we signed the buyer’s deed, we heard on the news that stones and rocks were thrown at a Jewish couple on the road that we will have to take every day to work and back home. I backed down immediately. I thought about the reality of living in such place. I was thinking about my children needing to take an armored bus to school every day. Or if, god forbids, I find myself under terror attack with my children, what am I going to do?? So we ended up buying a home in a Gedera, a relatively “safe ” place to live. But not for long. Shortly after the Gaza war started in 2014  I found myself running to a shelter with my one year old son every day, few times a day. Since then, almost every day I hear of people dying by different acts of terrorism; knife or gun attacks, drive-by shootings, intrusions into homes, and suicide bombings. I then realized the reality of living in Israel, living with terror. This type of realty that makes you cynical, tough, trained and yet scared and pray to survive the day.

Me? I am afraid for the lives of all my loved ones, praying that I will never hear of a death of someone close to me. People keep telling me ” it’s nothing, you should have been here few years back, it’s quiet now …” people keep their routine saying to one another every day ” we will not give in, we are not afraid”.  Sometimes I am terrified-  just like my classmates in the US, just like some of the 9/11 survivors… why? How come I was basically running towards the terror during 9/11, while now, in Israel- my home I am running away from it? It is surprising how some factors that promote resilience to potentially traumatic events may be maladaptive in other contexts.

Growing up in Israel, unfortunately, we learned to live with terror. Although, it doesn’t shelter us from feelings of fear, trauma, emotional distress, and even courage, researchers showed that the high level of our exposure to terror moderates the psychological impact, which seems to be related to a habituation process and to coping mechanisms. Moreover, the most prevalent coping mechanisms were active information search about loved ones and social support.

Today I am a mother of two beautiful little boys . After both their delivery I looked up, thanked god asked him for two things every Israeli mother asks for her newborns; to keeps them safe and healthy and to watch over them during their service. I can safely say that because of my country and my upbringing, I became who I am today. Israel is not just a piece of land; it’s a life time of experiences, morals, and values which I am very proud to pass on to my children.

So, back to my big question: Why, during 9/11 terror I ran towards terror? Instinct. And, why now I run away from terror? Because I am now a mother. With all the strength and the ability to deal with fear and stress, motherhood requires a whole new level of dealing. Today all I want is to keep my children safe and at the same time raise them in Israel the same way I was raised…just like an eagle who always has her babies on her back.

Today unfortunately, terror is all too common all over the world. The only continent not experiencing terror is the Antartic. Do people in other parts of the world run to terror based on their life experience and exposure or do they run away from terror?  ‎Those of us in the helping profession- medicine, nursing, psychologists, trauma specialists- instinctively run to terror. Yet, any mother when with her cubs in the face of terror her first instinct is to protect irrespective of religion, culture, or border dispute.‎ No sane person directs their children into terror. Preparing our children to cope with a schoolyard bully has taken on new proportion. The bully is now a terrorist. We prevail by preparing our children for a brave new reality.

About the Author
Dorite Shabi is a clinical psychologist specializing in disabilities and special needs. She has lived in the US for nearly 19 years and aquired her degree in NY. For nearly 10 years, she worked with people with disabilities in the US and now is doing the same in Israel. She is mother of two beautifull sons.
Related Topics
Related Posts
Comments